微笑（Wéixiào) !  I’m delighted you are following along with us as we tour China, city by city.  We recently returned from a three-week family holiday in China. This is the fourth of ten posts whereby I introduce you to the culture of China through our eyes.  Today, we’ve arrived in Xi’an – with more than 3,100 years of history, it is one of the oldest cities in China.

Xi’anyang, just north of the present day Xi’an, was the capital of the Qin empire, home of the first Emperor of China, Qin Shi Huang, and site of the fabled terracotta soldiers. Chang’an (another name for Xi’an) was the home base for the Han dynasty (206 BC – 220 AD), starting point for caravans heading west on the Silk Road, and a center of Chinese art and culture during the Tang dynasty. 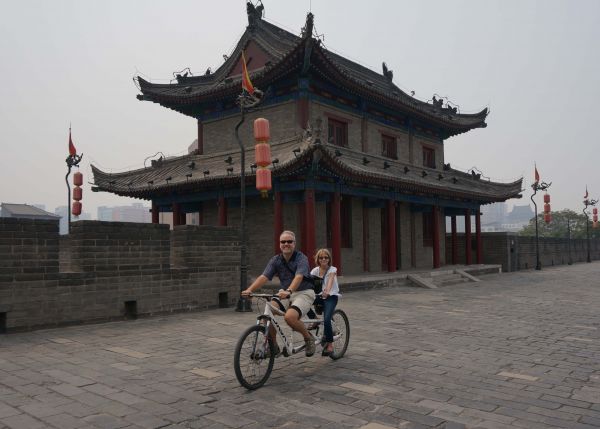 During the Ming dynasty, Xi’an was defended by a substantial city wall and watchtowers with construction beginning in 1370. You can walk on top of ancient city wall or rent bicycles as we did; it’s quite flat and wide, and beautifully restored. The grassy area just outside the wall would have been a moat.  The wall today encircles only a fraction of the modern city yet covers 14 square kilometres (5.4 sq mi); measures 12 meters (39 ft) in height and 15–18 meters (49–59 ft) in thickness at the base.

In the center of the old city wall is the Bell Tower, a wonderful three story wooden tower with glazed tile roof with an observation deck on the second level. Built in 1384 during the early Ming Dynasty, is a symbol of the city of Xi’an and one of the grandest of its kind in China. The Bell Tower also contains several large bronze-cast bells from the Tang Dynasty.  Nearby visitors can see the Drum Tower, erected in 1380.  Within the Bell Tower, a bell is struck at dawn, whereas a drum is beat at sunset to indicate the end of the day within the Drum Tower. 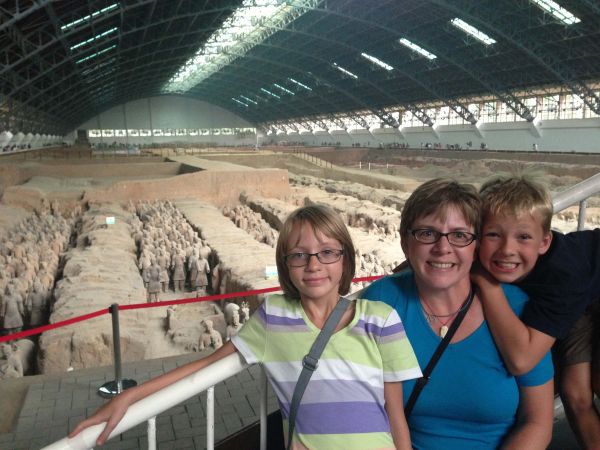 A truly amazing archeological discovery, the terra cotta warriors stand in rows in earthen tunnels, prepared for battle (Pit 1 is bigger than two football fields). Thousands of ceramic warriors and horses guarding the nearby tomb of the first emperor of China, Qin Shi Huang (Qin Shi Huangdi). The expressions on the faces of the figures are so real, it’s like staring into the face of ancient China over 2000 years ago.

Here, we spent the afternoon checking out the details of these life-size warriors, plated armor, footgear and headgear, and Mongolian horses. There is also a smaller museum  near the excavation pits with a shiny bronze sword and two large reconstructed bronze horse chariots.  The kids had a great time seeing the terracotta soldiers in real life.  Nothing quite prepares you for how extensive the excavation sites truly are – and they are only partially excavated.

To discover the terracotta soldiers, you can go on an amazing expedition to Mount Li, the burial mound of China’s first emperor, from the comfort of your home. With this fun, hands-on activity kit – DIG! Discover Terra-Cotta Soldier

– kids can learn about his still unopened tomb and the world famous terracotta army, as they excavate the 10-inch reproduction of a 2,200 yearly-old warrior. We enjoyed this activity ourselves some time ago and the kids loved it!

Xi’an is also home to two Buddhist temples, the Giant Wild Goose Pagoda and Small Wild Goose Pagoda. Both are well over 1,000 years old and have survived great earthquakes. In the 7th century, the Tang dynasty monk Xuan Zang took off for India, collected Buddhist texts, and returned to China, bringing the Buddhist religion with him. The pagodas were built to store the Buddhist scriptures, and although they have been rebuilt over the centuries, they haven’t significantly changed in appearance.  We visited only the small pagoda.

During our holiday in China we first traveled to Xi’an and then Chengdu.  While in Chengdu, we met a man who had had recognized from our hotel in Xi’an – what are the odds that we’d stay at the same hotel in both cities?!  Anyway – we came to be friends and I am delighted to share his video of the Muslim Quarter in Xi’an.  He did a remarkable job capturing the sights and sounds of this part of the city.  The kids and I absolutely loved the food of Xi’an.

To explore ancient China in more depth, I encourage you to explore the Squidoo Lens Jimmie has put together, Ancient China: A Homeschool Unit Study.  You might also be interested in a series of art lessons put together by the Minneapolis Museum of Art, China’s Terracotta Soldiers.  It includes a wonderful PowerPoint presentation that gets kids to examine specific sculptures pictured within.

Join me tomorrow as we continue our discovery of China as we travel to Chengdu – you won’t want to miss this one.  Chengdu is all about Pandas!

This post is part of the iHomeschool Network’s Autumn Hopscotch, a 10 day series of posts by over 40 different homeschool bloggers. You can visit the hopscotch home page at iHN for ideas and inspiration in topics like Art for All Ages: Tips and Tutorials and Raising Lifelong Learners.