One of the activities my children most enjoyed about summer camp was the opportunity to explore the folk art of Rosemåling in more depth. We had been introduced to this delightful art a year or so ago when I invited one of our talented lodge members to give a presentation to Barnesklubb (Scandinavian Kid’s Club).

You ask, What is Rosemåling? If you have seen the latest Disney movie, Frozen, you are likely familiar with Rosemåling.

Rosemåling, or rosemaling, Norwegian for “decorative painting”, is the name of a form of decorative folk art that originated in the rural valleys of Norway. Rosemåling is a style of decorative painting on wood that uses stylized flower ornamentation, scrollwork, lining and geometric elements, often in flowing patterns. Many other decorative painting techniques are used such as glazing, spattering, marbelizing, manipulating the paint with the fingers or other objects, etc.

When the kids wrote home, they hinted about a project they were doing in Rosemåling class but they didn’t give any details because they wanted it to be a surprise.  When I picked them up at the conclusion of camp, I was indeed surprised. Their work was astonishing … especially for beginners!

Pictured below are the two Mangebørds they painted in class. Traditionally, Mangebørds were made by young men wishing to marry a young lady.  He would place the Mangebørd on her porch or doorway and return the following day. If the Mangebørd had been brought into the house, her reply was yes. However, if the Mangebørd was still where he had left it, her reply was no. If he wanted to marry another young woman in the future, he would have to make another Mangebørd (on a cautionary note: beware of the man with many Mangebørds). 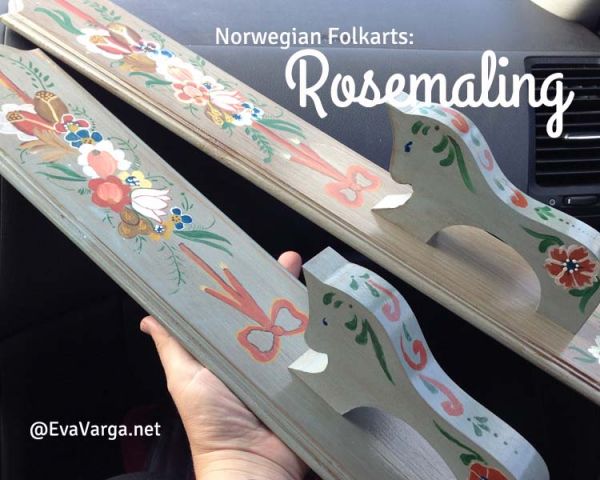 Question :: Can you identify which style of Rosemaling is shown here?

Answer :: The Rosemaling style that is pictured above is Valdres.

Upon their return from camp, the kids said they wanted to explore Rosemåling in more depth and to earn the Cultural Skills pin. In Barnesklubb, we thereby kicked off the new school year with an introductory lesson.

My kids, now more knowledgeable than I, gave a short lesson to their peers about the styles of Rosemåling and then led them through a few simple strokes.