In November each year, I coordinate an annual Art Show for our local homeschool community.  This past year, I wanted to undertake a long term project that would enable the homeschool students in our area to collaborate with one another and to make an impact on the greater community.  When I learned of bottle cap murals – I knew this was the perfect project.

See my previous posts here and here to learn how to easy it is to plan an art show for your homeschool community.

I am so excited to share this project with you, I couldn’t wait until we are finished. This mural project is an amazing example of how capable children are given the opportunity to express themselves in new and innovative ways. There were so many valuable steps involved; today I detail how the project got underway. 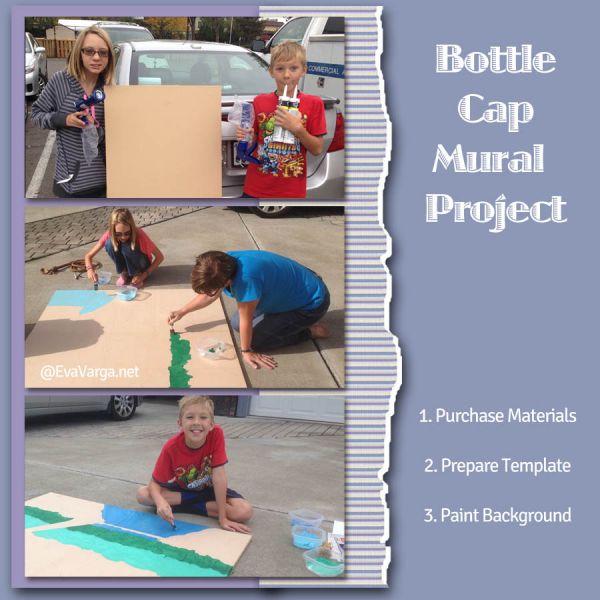 We began collecting bottle caps in the spring of last year and by the time school began in the fall, we had begun begging our friends and families to do the same. Each time we visited Grandma and Papa in Oregon, they’d have a plastic tub full of caps they had saved for us. We were even saving our caps while in South America and had everyone in our tour group doing the same.

Other families in our community did the same.  I am so proud of the families and students who collected thousands of bottle caps, caps that otherwise would have gone into the trash, to create this incredible mural.

I wanted to create a mural that reflected our local area but that was also relatively simple in design. I sketched a few ideas on paper, conferred with my kids, made a few modifications and eventually settled upon a design featuring Mt. Shasta, the Sacramento River, and the Sun Dial Bridge – three prominent landmarks in Northern California.

A week prior to the art show, my kiddos and I went to Home Depot and purchased the materials we would need to complete the project.  I had considered seeking donations from our local ACE Hardware but just never followed through.

The next step was to transfer our template onto the wood panel and paint the background. Using a grid system, I quickly drew in the image with pencil and then recruited my own children to help me paint the background. Ideally, I would have liked all students to be involved in painting the mural but I elected to have the kids be involved only in adhering the bottle caps. 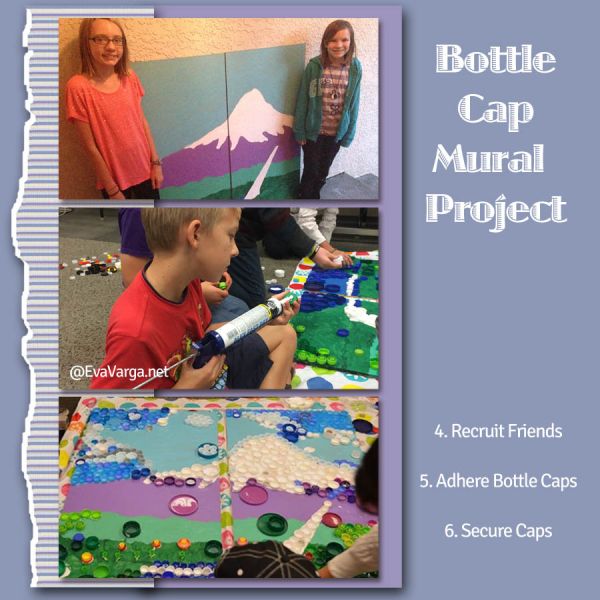 At that point, the mural is ready for caps. I thereby transported the mural to the library where the art show was taking place. I laid it upon an old picnic table cloth and set out the boxes of bottle caps (sorted by color) around the perimeter.

My children supervised the others in adhering the caps using the caulking gun.  At some point in the process, however, a few adults took over supervision and my own kids walked away to allow others an opportunity to get involved.

Some kids wanted us to leave it just as a painting because it looked so pretty.  To be honest, I was a little scared myself it wouldn’t look as good once we added the bottle caps.  Fortunately, that wasn’t the case.

I wasn’t able to supervise myself as I was involved with other details of the art show. In retrospect, I wish I had better explained the vision to the other adults because some cap colors were adhered to the board that didn’t match the background. I thereby spent some time scraping off these caps when I got home.

Sadly, we didn’t have enough bottle caps in the colors we needed (particularly purple and light blue). The board thereby is awaiting completion in the hallway of my home. When the board is finished, we will screw in the caps with screws to more securely mount them to the board.

Stay tuned for the conclusion of the bottle cap mural project when we donate the completed mural for display locally.