Every year, we gather with our lodge family to make lefse.  It is an all-day affair.  It is a great social time, allowing everyone to chit chat as we work collaboratively.  This year, the lodge here in Northern California used 140 lbs of potatoes and we yielded 75 dozen lefse!

Lefse is a traditional soft, Norwegian flatbread. Lefse is essentially made from riced potatoes, flour, and milk or cream, and cooked on a griddle – however, the recipes vary with each family. 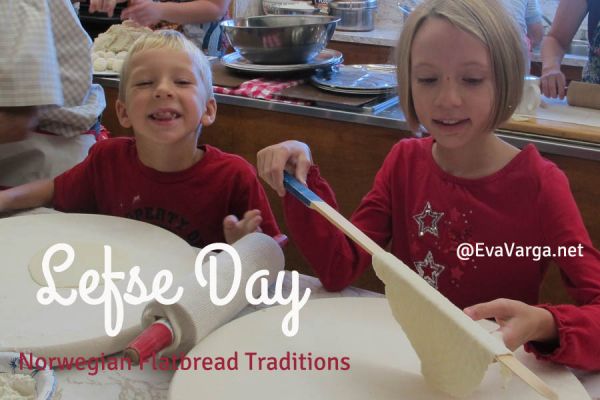 Growing up, lefse was prepared as a special treat for the holidays. We still make it every holiday season and prefer to eat ours with butter and cinnamon sugar. You can also spread them with jam and peanut butter, cream cheese, or nutella, or you can go the savory route and roll up your Thanksgiving Day leftovers.

Every year, Sons of Norway lodges around the country gather to make lefse for their members or for annual bake sales. My kids have always loved to help in the kitchen and have thereby made lefse since they were toddlers. My daughter has become quite adept at rolling and my son prefers to man the grilling stations. 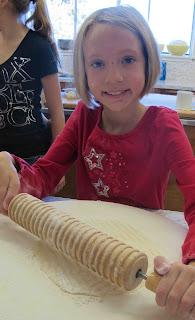 Historically, the first lefse in Norway didn’t contain potatoes, it was made only from flour. Women would travel from house to house, village to village to make lefse to last the winter months. The flour lefse would cook up like a cracker and be able to last through the season.Many households stored their lefse is wooden boxes covered in cloth or just stacked on shelves. When you were ready to enjoy some lefse it was dipped in water and soaked between damp cloth until softened. 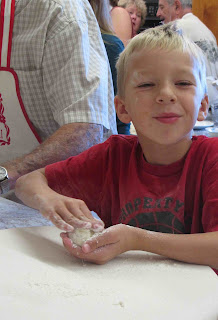 Potatoes were introduced some 250 years ago which were easy to grow and soon abundant. The potato was thereby  incorporated into many Norwegian foods, even lefse!

Like Ireland, Norway suffered from the effects of the potato famine in the mid-1800′s, which is about the time that many Norwegians came to the United States. They brought their knowledge and rolling pins. The result is a Norwegian potato bread delicacy that’s part of a special tradition replicated in many Norwegian-American homes for more than 150 years.

A tradition that you can be part of once again. For everything you need to know about making lefse, visit my Squidoo lens, How to Make Lefse.