We arrived in Rome in the late morning and had a long wait for our luggage at the carousel and another long wait for our rooms upon our arrival at the Ergife Hotel via taxi. Several drivers offered “taxi” services upon our departure of the hotel lobby – we’ve learned however that it’s best to walk past to the line of “official” taxis outside; generally less expensive and no need to trek across the expansive parking lot.

Once we had arrived at our rooms (with tiny twins reminding us of Xi’an – where we were coincidentally exactly two years prior), we changed into our swimsuits and went down to the pool for a couple of hours. It was huge and though a little chilly, the swim felt so good. Just what we needed to loosen our muscles after the long flight and many hours of sitting. We took a short nap and then returned to our room to change for dinner. 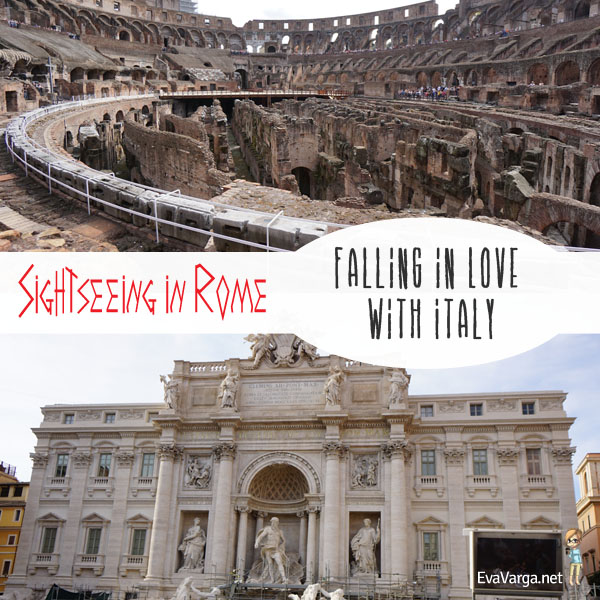 Sightseeing in Rome ~ Day One

We then ventured forth to experience Italy for the first time. We walked quite a distance from the hotel to reach the subway and then proceeded to Via Ottaviano, not far from the Vatican, where we window shopped for a short time before coming to a quaint restaurant with outdoor seating along the sidewalk. The boys selected pizza (cheese for Jeffrey and salami for Patrick) while I chose spaghetti carbonara and Geneva, a mozzarella and tomato salad. The food was delicious! Pasta and pizza in Rome! I could hardly believe it was true.

After dinner, we continued to walk along Ottaviano until we came to the St. Peter’s Square. The boys spent a significant amount of time here taking photographs as Geneva and I sat down to people watch. To be quite frank, I hadn’t slept well on the plane and wasn’t feeling well. Geneva enjoyed the quiet time to sketch in her journal.

As we began to retrace our steps back to the hotel, we stopped for gelato at Lemongrass. It was heavenly! Geneva selected their signature recipe – lemongrass with white chocolate, lemon cream, and grain pralines. Patrick and Jeffrey chose their usual, cookies & cream and mango, respectively. My choice was ricotta e fiche – soft white sheep cheese with Mediterranean figs. Mmmmmm. To this day, Geneva and I rave about the gelato here. It turned out to be the best in all of Italy. 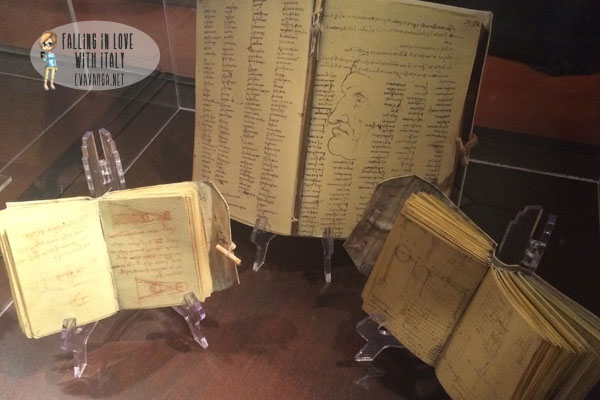 The following day, our first destination was the Piazza del Popolo for a which featured an Egyptian obelisk at the center. Here we also discovered a Leonardo da Vinci museum which was very nice – featuring many hands-on models and a few artifacts, namely a few of his journals!

We then walked to Castel Sant ‘Angelo, crossing the River Tiber via the Ponte Regina Margherita. The Castel Sant’Angelo, also known as the Mausoleum of Hadrian, is a towering cylindrical building in Parco Adriano. It was initially commissioned by the Roman Emperor Hadrian as a mausoleum for himself and his family. Once the tallest building in Rome, it was later used by the popes as a fortress and castle, and is now a museum.

The castle was quite impressive and thus we paid the admission to see the interior. Were were not disappointed. There were many artifacts and elaborately decorated rooms within. Most notably was a statue of Marcus Tulles Cicero. As we rounded the steps to a lower level, I’d remarked that it resembled Voldemort and the party behind us started laughing and stated they were thinking the same thing.

In the afternoon, we met up with our Trafalgar tour group for introductions and an overview of our itinerary. It was quite a large group in comparison to International Expeditions, our first experience with group travel. To conclude the evening, we took a bus around the city for a short evening highlight tour and then enjoyed a traditional Italian style dinner at Il Giardino de Albino. The meal was several courses – antipasti, a variety of salami selections, breads, four pastas, and dessert with coffee and limoncello, a lemon liqueur.

We departed via coach with the group for the Vatican, the first of our optional tours in Italy (and an extra expanse paid in country). Trafalgar had made advance reservations and thus we were able to skip the long lines that serpentined around the Vatican walls. We were able to enter immediately upon our arrival, a blessing as it was pouring down rain. This is the best benefit of traveling with a group but I’ll save these observations for a later post.

The Vatican Museums house ancient Roman sculptures such as the Laocoön, Renaissance frescoes, and the Sistine Chapel, famous for Michelangelo’s ceiling. Our tour group moved rather quickly through each of the rooms it was near impossible to retain what she shared – even when we could hear her. It was so crowded.

The art inside was simply stunning. I hadn’t realized that the borders or frames between images was not in fact 3-dimensional  paneling but was painted to appear 3D! Even the long hallways were decorated floor to ceiling; mosaic inlay floors, tapestries and sculptures on pedestals, and my favorite the cartography hall with maps of the Roman provinces and regions representing each of the foreign dignitaries.

The Sistine Chapel was larger than I had imagined. Photographs and talking were prohibited but that didn’t stop everyone. As the murmur of whispers grew, the guard boomed over a megaphone, “SILENCE! SILENCIO!” We enjoyed sitting on a bench along the wall to take in as much detail as we could. 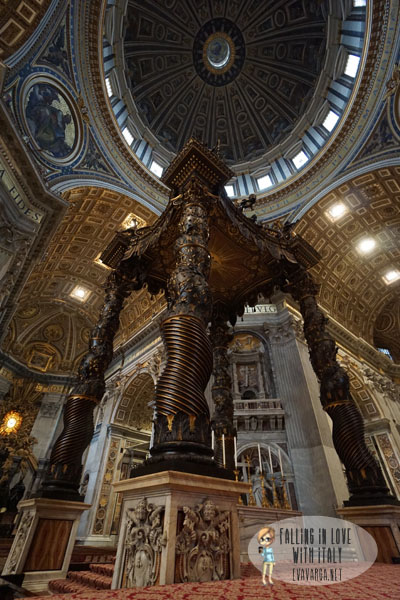 I was impressed, too, with the enormity of St. Peter’s Basilica. The paintings inside had been replaced with mosaics as the smoke from the Pope’s ___ had damaged the fragile nature of the paints. Symbolic burial urns and numerous altars adorned the cavernous interior. There were also two mummies of past popes who had been canonized:

In the floor were covered openings that gave visitors a peak into the crypts below. There are over 100 tombs within St. Peter’s Basilica, many located in the Vatican grotto, beneath the Basilica. These include 91 popes.

Within the Basilica there is also a wedding chapel and a Baptismal Fountain. During our tour, there were services taking place at a couple of the altars. In the center was a large dark canopy that looked to me like Mahogany. Our guide pointed out that it was actually bronze. In fact, all the dark colored material on the walls and surfaces that looked like wood is actually bronze. From this central canopy, only the Pope is permitted to give services. 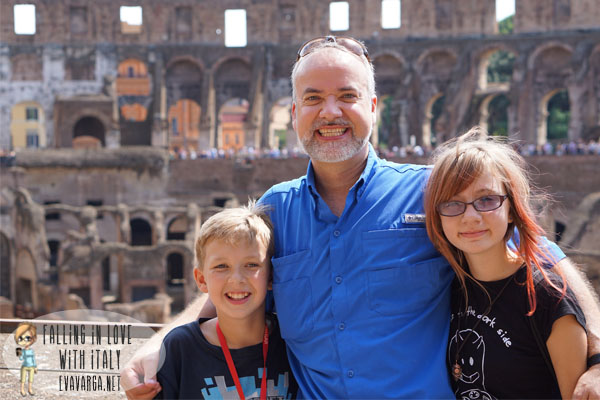 The early part of the afternoon was spent at the Colosseum. It is hard to imagine the splendor of this incredible structure – built primarily for Roman entertainment of slaughtering wild and exotic animals. We learned that the thumbs up / down hand signal so popularly featured in the movies is slightly inaccurate. To save the life of the gladiator, the emperor would poll his people. If they felt his performance worthy, they would enclose their thumb within their fists. To signal his death, they’d made a slow downward slashing motion with an open palm.

Much of the Colosseum has fallen into ruins and has only partly been restored. Fortunately, a portion of the arena floor has been rebuilt so visitors can visualize the structure at the peak of its use. Just before departing, we took a group photo at the Arch of Constantine.

As we drove back to the hotel that afternoon, we drove past the Circo Massimo where chariot races had previously been contested. Other notable sights we observed from the coach included the Palatino and Campidoglio (hilltop square designed by Michelangelo). I was frustrated that we didn’t have more time. 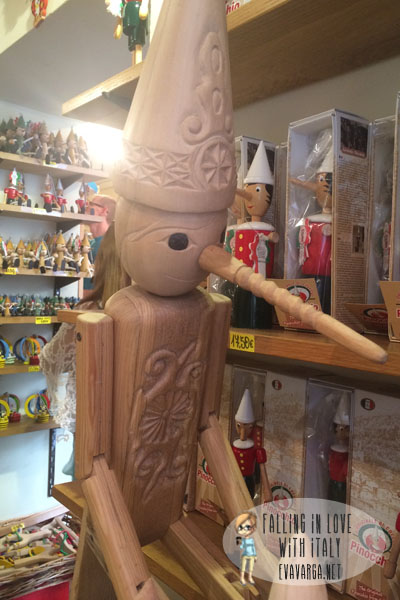 In the evening we gathered for the second optional tour, Backstreets, Piazzas, and Fountains of Rome. Our first stop of this walking tour was the Trevi Fountain which was sadly under renovation during our visit. So much of the fountain was covered in scaffolding and the area so very crowded (several other tour groups were here at the same time) that it was uncomfortable and very frustrating.

After a quick little gelato, we continued on our walk rather swiftly through the back streets as our guide pointed out different architectural points of interest. There was just too much visual and audio input that even I was overwhelmed. Jeffrey gave up listening and removed his ear bud.

Along the way, there were many quaint little shops, restaurants, and gelaterias where we would have loved to browse. I was especially disappointed that we were not given time to stop at a shop where a woodworker was carving a Pinnochio. I so desperately wanted to observe him longer and buy one but we were pressured to keep moving. 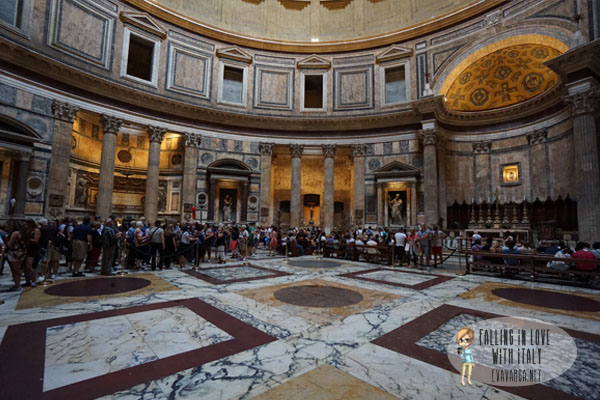 The Pantheon was constructed on the site of an earlier building commissioned by Marcus Agrippa during the reign of Augustus. The present building was completed by the emperor Hadrian and probably dedicated about 126 AD. An opening at the center of the ceiling lets in natural light and of course any precipitation. The center floor is clear of furnishings or sculptures but covered with elaborate mosaic designs.  As before, the interior walls were adorned with murals and ornately decorated altars.

Lastly we visited the Piazza Navona which had at one time been built on the site of the Stadium of Domitian (1st century AD) before the walls bordering the Trevere (River Tiber) were built to avoid flooding and the city streets were raised. A prominent feature of this piazza today is Fontana dei Quattro Fiumi, or Fountain of the Four Rivers (1651) by Gian Lorenzo Bernini.

Here, we were given a short time to browse on our own and get something for dinner. Another unanticipated expense. I’ve become a little disenchanted with group travel. We opted to move away from the piazza and find a small pizzeria that would be a little less spendy.

This post is part of a five-post series, The Italian Scene: Falling in Love with Italy.  Join me tomorrow as I share our experiences in Sorrento and the Amalfi Coast.