I am delighted. Another homeschool mom organizes a Geography Club similar to the way I had organized Passports Club in central Oregon.  She hosts a gathering in her home once a month, invites the children to give presentations on the country selected for that month, and encourages families to bring a dish from that region to share.  The focus in October was on Nepal and we were fortunate to have two guest speakers … Gyan (a native to Nepal) who now resides here in Northern California and Ana (a native to Costa Rica who has climbed Mt. Everest).
Gyan spoke to us of his childhood and of how much education is valued in Nepal. He reminded us of how fortunate we are in the United States and how many take our opportunities for granted.  He spoke of the poverty and stated that girls in Nepal do not get a formal education, though this is slowly changing, particularly in urban cities.  He also stated that many young Nepalese men serve in the military.
Ana spoke of her expedition and attempt to summit Mt. Everest earlier this year.  She shared with us a slideshow showcasing man photographs from her expedition and talked about the many perils that face the climbers.  We were enthralled by her presentation and had many questions.  She had brought with her a small rock that she passed around for all to touch.
After the presentations, we enjoyed the food that everyone had brought to share.  We were encouraged to eat the many dal dishes in the Nepalese manner … with our fingers rather than forks or spoons.  Dal refers to the thick stew prepared from lentils, peas, and beans – an important part of Indian, Nepali, Pakistani, Sri Lankan, Bangladeshi cuisine.  Dal is a ready source of proteins for a balanced diet containing little or no meat.  It was a little strange to eat in this manner .. many of us felt uncomfortable as we’ve become so accustomed to using utensils.
I asked if Gyan might have a friend or family member that could send us a postcard.  Instead, he allowed us to pick from a stack of postcards he had brought along for the occasion.  I thereby don’t have a postage stamp … but a las, I share with you the card I selected. 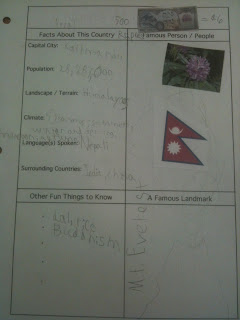 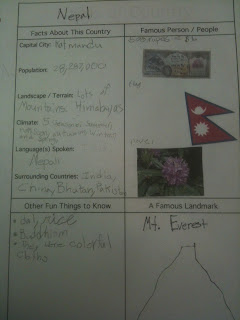 The postcard album notebook pages the kiddos completed.
We returned home and soon thereafter completed the notebook pages for our Postcard Album. Of note, Nepal is the only country in the world whose flag is not rectangular and the nation’s flower is rhododendron – my mother’s favorite.