We are excited to once again join volunteers of all ages for National Public Lands Day’s (NPLD) 20th Anniversary on Sept. 28th. National Public Lands Day is the nation’s largest, single-day volunteer effort for public lands. This is a great service learning opportunity that began in 1994 with three sites and 700 volunteers. It proved to be a huge success and became a yearly tradition, typically held on the last Saturday in September. 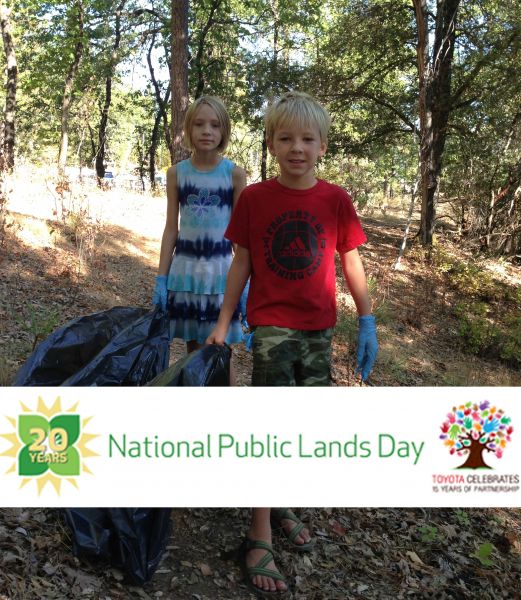 In 2012, we collected trash at a National Park site in our community.  Between the three of us, we collected 11 pounds of trash in just a couple of hours.  We were confidant we would be awarded the weirdest find – we found an umbrella and a small rug, but another group found a wig!

Tasks and activities vary by site but over the years, National Public Lands Day volunteers have:

Seven federal agencies as well as nonprofit organizations and state, regional and local governments participate in the annual day of caring for public lands. National Public Lands Day keeps the promise of the Civilian Conservation Corps, that worked from 1933-1942 to preserve and protect America’s natural heritage. Find an event in your local area here, NPLD Sites.

If you are unable to participate on the 28th .. not to worry.  Appreciating our public lands is not limited to just one day. With events, educational programs and clean-up efforts happening every day across the country, there are plenty of fun ways for all Americans to regularly enjoy, protect and maintain our public lands.  The Public Lands Every Day Events Calendar lists a wide-range of activities that families can participate in. Whether it’s testing your nautical skills in a crazy cardboard boat or restoring the California coastline, you’ll find something for everyone.