From my experience in the classroom, I would dare to state that most students really enjoy using a microscope. They love getting to see this microscopic world up close and to marvel at the science of what is usually invisible to our “naked” eye.

My daughter has had a fascination with fungi ever since I can remember.  On a nature walk a few years ago, she discovered slime molds and she immediately knew what the focus of her science fair project would be. 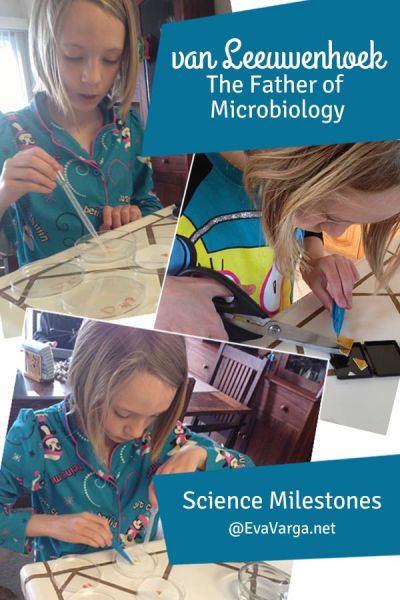 Slime molds are a broad term describing some organisms that use spores to reproduce. Though slime molds are no longer considered part of the fungi kingdom, her discovery opened the doors to a new realm of science.

The kids began to ponder what organisms might be present in the small pools of stagnate water along the trail we frequented on our evening walks. They even began to ask questions about the different types of microscopes.

It was clearly time to introduce them to the father of microbiology, Antonj van Leeuwenhoek. 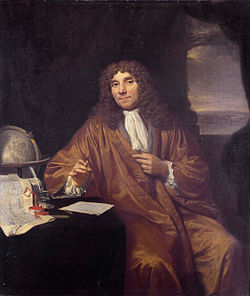 Antonj Philips van Leeuwenhoek (October 24, 1632 – August 26, 1723) was a Dutch tradesman and scientist. He is commonly known as “the Father of Microbiology“, and considered to be the first microbiologist. He was born Thonis Philipszoon in Delft, Holland on October 24, 1632, to Philips Thoniszoon, a basket maker, and Grietge Jacobs (Margrietke Ja­cobsdochter van den Berch), a brewer’s daughter.

As an adult, he preferred to sign himself “Antonj van Leeuwenhoek” (pronounced “AHN-toe-nee fahn LAY-oo-ven-hook”), that is, “Anthony from the Lion’s Corner”, after the location of his father’s corner house near the Leeuwenpoort, the “Lion’s Port” in Delft’s East End. The use of ‘van’ was an affectation of social standing that he assumed for its prestige.

His only known formal education was at an undistinguished elementary school in the village of Warmond. He never attended a university, though an uncle is believed to have taught him some mathematics and physics. In 1648, at age 16, he began a five-year apprenticeship with a Scottish linen draper in Amsterdam, returning to Delft in 1654 to open his own woolens shop.

In 1653, van Leeuwenhoek encountered his first simple microscope, a magnifying glass used by textile merchants to count threads and to check quality. Such lenses were capable of magnifying to a power of about three diameters. He also read Robert Hooke’s newly published Micrographia, which may have piqued his enduring interest in the world of the tiny.

He began to make his own hand-held microscopes; it is believed that he constructed at least several hundred but no two accounts of van Leeuwenhoek’s work agree on the number or quality. He left about 250 finished instruments, most of which included a mounted specimen, and also about 200 mounted lenses.

The number and variety of van Leeuwenhoek’s original scientific discoveries is astonishing. I share only a few of his most notable “firsts”:

He often referred with reverence to the wonders God designed in making creatures great and small. He believed that his amazing discoveries were merely further proof of the great wonder of God’s creation.

Antonj van Leeuwenhoek enjoys a rare distinction among revolutionary discoverers, in that he was widely recognized and honored for his genius in his own time. In 1716, when he was in his 84th year, the University of Louvain officially honored him by striking a gold medal with his likeness on the obverse and a view of the city of Delft on the reverse, in recognition of his work. A distinguished delegation from the university ceremoniously presented this to him in a bag made of woven gold bullion, along with a diploma. This incident corresponds roughly with the modern conferring of an honorary degree.