When I was in college, I wrote a paper for my U.S. History class about Norwegian Americans. Much of the paper included historical anecdotes of my own family history. My professor was impressed with my level of genealogical knowledge and inquired whether or not I was a member of Sons of Norway. At the time, I had never heard of the fraternal organization. Upon further investigating, I discovered that my great aunt was a member of the Sonja Lodge and I thereby joined. I attended a couple of functions – but at the time, college life and the lack of members of similar age prevented me from renewing my membership.

When we moved to Central Oregon, I knew there was lodge locally, Fjeldheim, but did not seek to re-join until I made the decision to homeschool. I joined a year ago this month and have been delighted with the educational benefits of membership. One of the greatest is being able to take advantage of the many cultural opportunities. A partial sampling includes:

Shortly after joining, I stumbled across an article about the Sports Medal Program, whereby members achieve recognition of healthful activities. We were already actively participating in a variety of endeavors (swimming, cycling, hiking, running, dance, Taekwondo, etc.), we simply began to keep a tally of the time we spent doing these activities. 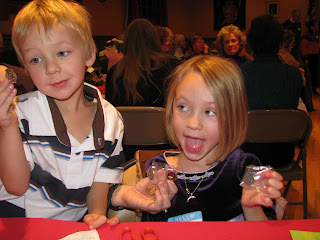 Participants are assigned point or mileage requirements for medal qualifications. The program is great because you don’t need to be a natural athlete-the only one you are really competing with is yourself. As you reach each objective, you will be awarded different grades of sports medals. Begin in pursuit of the Bronze, then work yourself up to Silver, Gold, and eventually Enamel.

Saturday evening, during the lodge’s monthly social dinner, the kiddos and I were presented with the Idrettsmerke sports medals that we have earned. I just love the expressions on their faces! Buddy earned a bronze (walking and swimming). Sweetie earned all four – bronze, silver, gold and enamel! She’s one active girl (swimming, walking, Taekwondo, dance, and cycling). I was awarded the first three and need just ~300 points for enamel (which I should earn by the end of this month).

I was very impressed with the quality of the medals. The best part is that the medals are free to members! Buddy is enthusiastic about earning the other medals and will likely do so faster now that he studies Taekwondo. Sweetie says she would like to learn to cross-country ski and earn Skimerke medals.