Early in the morning, we boarded the  Hurtigruten  for the final 2 days of a larger 12 day cruise.  The weather wasn’t cooperative and throughout most of the day, it was raining lightly and the skies were gloomy.  The kids and I thereby spent much of our time on the observation deck working on our journals.
We enjoyed two ports of call while aboard the Hurtigruten ….
Kristiansund … where at the end of the 17th century, Dutch sailors brought the knowledge of clipfish production and for a number of years the city was the largest exporter of clipfish in Norway, exporting goods mainly to the Mediterranean countries. 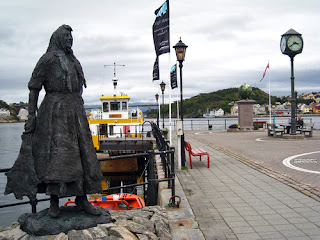 Molde … where the Nobel prize winner Bjornstjerne Bjornson attended school and Henrik Ibsen vacationed.  While we walked about, we observed another couple attempting to geocache … we followed behind them in hopes that we might also be able to find the cache (sans clues … MeiLi is really good at find the hidden niches) but turns out they weren’t successful either.

There were other stops along the way to Bergen, but most were so short that passengers were not allowed off the ship to site see.  The Hurtigruten also serves as a sort of water taxi along the Western seaboard and delivers cargo and mail along its routes.
Interestingly, we must have been the youngest people aboard the Hurtigruten.  Upon departing from Molde, we decided to relax in one of two hot tubs aboard the ship.  When the other passengers observed us, they were dismayed and remarked, “We’ve been on the ship for 11 days and didn’t even realize there was a hot tub on board.”  Seemingly, there was soon a small parade of passengers coming down to gauk at us.