In May, we ventured to Florida for a family holiday. While there, we were fortunate to spend a few days visiting the Everglades and the Keys. We observed so much and are still in the process of absorbing all that we learned. In an effort to encourage the kids to be more independent with their education, for the past few months I have asked the kids to do a journal entry in their nature journals.

This past week, I asked them to choose something they had observed while we were in Florida.  Geneva chose to record her observations for the Horseshoe Crab while Jeffrey chose to illustrate the Lubber Grasshopper. 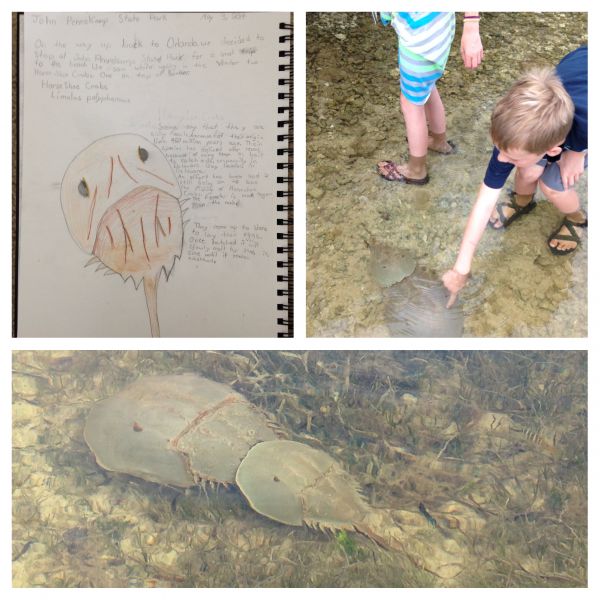 While four species exist today, only one species is found in North America; Limulus polyphemus, found along the Atlantic and Gulf coasts. Horseshoe crabs are not true crabs but are more closely related to arachnids (along with spiders and scorpions) than to crustaceans (along with true crabs, lobsters, and shrimp).  Horseshoe crabs are often called “living fossils” because fossils of their ancestors date back almost 450 million years and the horseshoe crab body forms have changed very little over all of those years.

On beaches along the mid-Atlantic states and Florida in spring and summer, male horseshoe crabs move parallel to the shoreline on sandy flats and intercept females as they pass by. A successful male attaches himself to a female by using his specialized front claws, and together they crawl to the beach.

Horseshoe crab larvae emerge from their nests several weeks after the eggs are laid. Juvenile horseshoe crabs resemble adults except that their tails are proportionally smaller. The young and adult horseshoe crabs spend most of their time on the sandy bottoms of intertidal flats  or zones above the low tide mark and feed on various invertebrates. 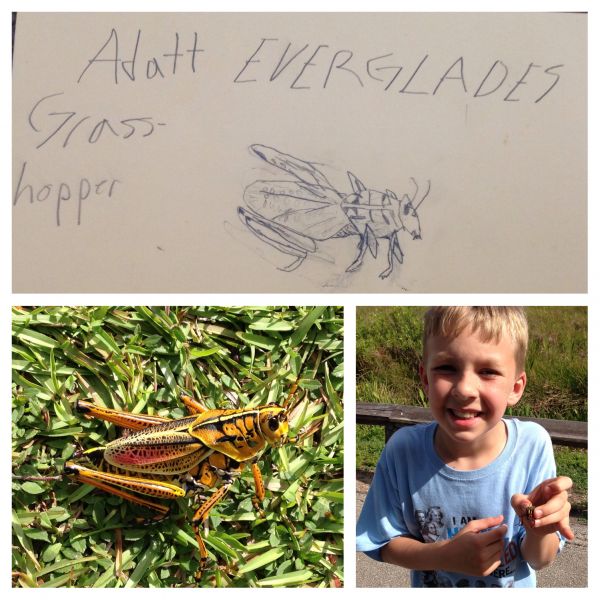 The eastern lubber is surely the most distinctive grasshopper species in the southeastern United States. It is well known both for its size and its unique coloration.  In the photograph above, note the wings of the adult lubber do not extend past the abdomen.  As a result, the wings are not much help and the grasshopper relies more on its legs for mobility. Hence, we can understand where its name was derived. “Lubber” is an old English word “lobre” which means lazy or clumsy. In modern times, it is normally used only by seafarers, who term novices “landlubbers”.

While in the Everglades, we mostly observed the nymphal stages (immature grasshoppers) which differs dramatically in appearance from the adults. Nymphs typically are almost completely black, but with a distinctive yellow or orange stripe along its dorsal side.  There were so many nymphs present it was difficult to walk in the grass without stepping on one. They were also easily handled (due in part to their lack of wings).

Our Florida nature study is still underway.  I know the kids have several other entries they plan to document in their journals.  We’ll share each with you over the next few weeks.