The Klipfish Code
by Mary Casanova

Synopsis: When German bombs shatter Marit’s peaceful village life in Norway, she and her family begin a long and harrowing wartime-occupation experience that will test their strength and courage. Her parents begin work underground in the resistance movement as Marit and younger brother Lars are sent to a coastal island to live with their grandfather, Bestefar, and their aunt, Ingeborg. 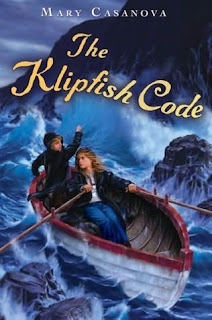 Though Norway was occupied for five long years, Norwegian resistance efforts were strong. For refusing to teach Nazi propaganda, one of ten teachers was sent to a concentration camp. Tensions arise when Marit’s grandfather seems unwilling to rock the boat and stand up to the Germans, even after her aunt (his daughter) is taken away one day.

When Marit happens upon a wounded Norwegian soldier, her own fear of what could happen if the Germans caught her assisting him almost causes her to turn her back on the man. Somehow she finds the courage to hide him, and to finish the mission he begs her to take on.

Evoking the grim reality of war and its effects on ordinary citizens, this suspenseful historical tale is also noteworthy for drawing attention to a region of Europe not commonly featured in children’s fiction about World War II. The author, Mary Casanova, appends an enlightening author’s note, a glossary (with pronunciations) of foreign words, and suggestions for further reading about wartime Norway. Casanova lives in Minnesota. Her ancestors are Norwegian.

We attended the Sons of Norway annual picnic yesterday afternoon and had a wonderful time. Just the kiddos and I as DH had made plans to fly RC planes with his buddy. He has also told me that he is expected to socialize, mingle and work with people as a part of his job… on the weekends and evenings, he is very tired (his job is intense and stressful) and prefers to just relax, do whatever chores need doing, and invest his free time in his family and personal interests.

I understand what he is saying… where he is coming from. He is a very social person. When we are together, I rely upon him to get conversations started. I am generally very quiet in large groups… I’m really quite shy when I don’t know anyone. It is actually beneficial that I attend these functions on my own as it forces me to open up and engage others in conversation. The only drawback is that it is difficult to do this when I must also watch the kiddos.

We haven’t yet had the opportunity to meet everyone – I know only a handful of the other members. One woman I met today, Priscilla, is originally from England. When we returned home and I was glancing at the lodge newsletter I discovered that she is a marathon runner and was recently inducted into the Distance Runners Hall of Fame. She won the Boston marathon in …. and hold many Masters records. I wish I had known this at the time I met her – I would have loved to talk more and even to ask for her autograph! I will certainly seek her out at the next gathering.

When we first arrived, Sweetie had brought along a cross-stitch project she had just started. She got to work on it right away and many of the older ladies were intrigued and impressed that Sweetie was doing it on her own. One woman asked her her age and Sweetie said she would be 6 next month. “Oh. You’ll be starting school soon. Where will you go?” The woman inquired. “I homeschool.” The woman smiled and said, “You are very blessed.” Sweetie replied, “Yes. I am lucky.” The woman then looked at me and with a smile asked, “So I would guess she is at the 3rd grade level?” I answered, “In some subject areas, nearly so.” Sweetie announces, “I love math! I’m starting a 2nd grade book soon!” 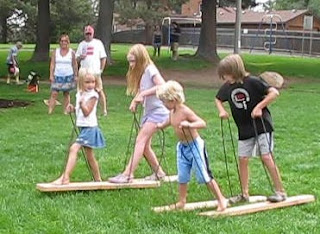 Shortly after everyone had eaten, the games began. The social committee members had done a spectacular job organizing everyone and getting everyone involved. I was impressed with not only the variety of games but also with how everyone participated. The games were very simple and brought everyone to riotous laughter.

The games started with a Water Balloon Toss. The kids loved this and soon, the adults were joining in on the fun. It turned out to be a great way to get everyone up and motivated as it was a rather humid afternoon. The group was then divided into two teams. Between the teams were two sawhorses with a 2×4 laid across the top and secured with vise-grips. Each team then took turns attempting to strike a nail with a hammer while holding it with just one hand (the little ones were given an exemption from this rule). The first team to get the nail all the way through was declared the winner. We played several rounds of this game (I’ll call it Hammer Relay) – it was a huge hit!

Another game involved teamwork, as pairs had to work together to move two planks across the playing field. This game was appropriately called Troll Feet and illustrated upon the planks were the painted red toes of a troll. The highlight of the day, though, was undeniable a Rubber Boot Toss whereby participants, divided into two teams, raced one another to fling an adult man’s rubber boot through your legs and up and over your backside (you had to bend over to do this). The goal was to get the boot to go forward ahead of where you were standing, but this took a little getting used to. My first attempt sent the boot about 20 feet behind me which set my team back a huge margin. We managed to catch up but were not able to make up the difference in time.

We all had a great time – particularly the kiddos. We look forward to future gatherings. I would like to get more involved – we’ll see what opportunities may develop.

While I was in college, I was a member of the local Sons of Norway lodge. I was not active by any means but I enjoyed reading the Viking publication that would arrive in mailbox and I looked forward to traveling to Norway some day. The primary reason why I wasn’t active is because there were no other young members – though my great aunt and uncle were long-time members, social functions were a little awkward. I also worked 30+ hours a week on top of my 18+ term credit load… I really didn’t have the time.

As a parent, I want the best for my children. As a homeschooling mom, I look for every opportunity to provide educational experience for them. I have known there is an active lodge here in Central Oregon since we first moved here… all things Norwegian tend to grab my attention.

A few weeks ago, I happened to drive by the lodge and I noticed there were a few cars parked outside. On a whim, I stopped and inquired within about the make-up of the members. I hoped there would be other young families so that I could make connections… I didn’t want to feel isolated and I wanted the kids to be welcome… their exhuberance and all. We attended our first Sons of Norway social last night and I was pleasantly surprised. Yes, as one would guess, the majority of the members are elderly… yet there were several young members… and the kids made friends with them immediately. Come to find out, the one family with whom I had connected when I first stopped are long-time homeschoolers themselves (though the girls are all in college). It was a little difficult at times to keep all the kids quiet at times – but all in all, the other members were very welcoming and accepting. I didn’t have a chance to visit with many but those I did talk with were very warm. I look forward to future gatherings. It will be a great opportunity for us all to learn about our cultural heritage and make new friends.