We awoke at a leisurely pace this morning.  We had reservations on the afternoon train to Oslo, so our morning was relatively open.  We discussed our options over frøkost and all agreed we wanted to return to Gamla stan (The Old Town) to explore the ancient part of the city more thoroughly.  This time, however, we opted to use city transportation rather than to walk. 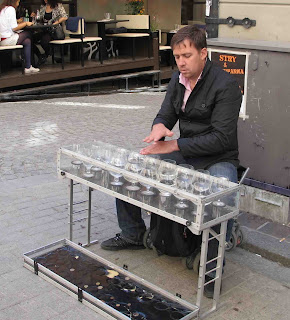 A street performer who caught our attention as the kids recently learned to play a simple song in this same way.  They each put a few kroner in his case to show their appreciation of his musical skills.

Until 1980, this old part of Stockholm was officially Staden mellan broarna (The Town between the Bridges). Gamla stan consists primarily of the island Stadsholmen.  The town dates back to the 13th century, and consists of medieval alleyways, cobbled streets, and archaic architecture. As I mentioned previously, North German architecture has had a strong influence in the Old Town’s construction and iconic buildings surround the square Stortorget. 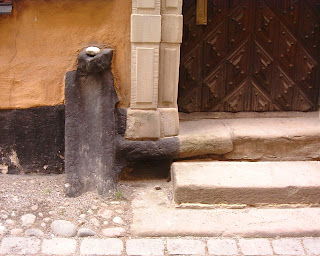 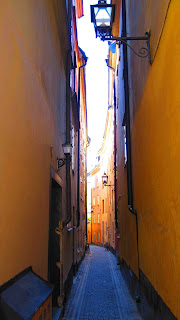 Mårten Trotzigs Gränd, less than a metre wide, is the narrowest alley in the city.
After a delightful lunch at a quaint little Italian restaurant, we made our way back to the hotel to get our things and proceed on by taxi to the train station.  We boarded promptly and enjoyed the scenic tour through the Swedish countryside en route to Norway.  We arrived late in the evening so immediately found a taxi and proceeded to our hotel, checking in shortly before midnight.  While this would normally feel a little unnerving so late, the northern latitude afforded us plenty of light and discounting how we felt phyically (it had been a long day, after all) it felt like it was only 7 or 8 in the evening.