We purchased a flat of pears a few days ago so I was eager to do this nature study before the kids devoured them entirely.  We began as suggested by Barb, More Nature Study #3 Pear Study, by reading about pears online.  We then identified the pears we had purchased and proceeded to sketch them carefully. 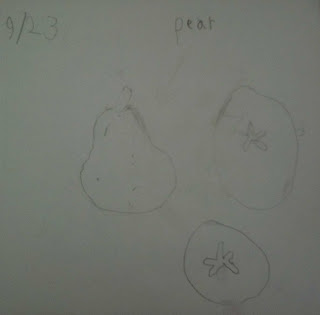 I was surprised that neither of the kids had wanted to use colored pencils or watercolor on their pears.  They both agreed they wanted to leave them as a pencil sketch.  I may have to do some watercolored pears as an example to inspire them. 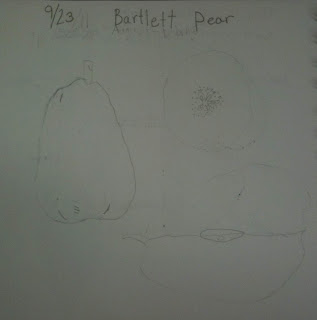 Sweetie’s journal entry
A few days after we sketched the fruit, we were able to observe a pear tree in the yard of a friend.  The kids collected a few leaf samples as well as a couple of the fruit.  “They aren’t ripe,” they remarked so I reminded them that pears ripen after they have been picked.  We brought a couple home to see how long they would take to ripen. 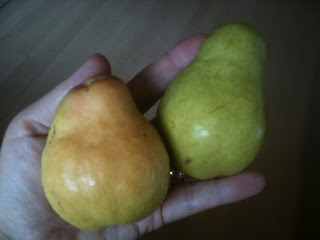 Another day passes and as we are doing a little grocery shopping, Buddy discovers Asian Pears in the produce department.  “Can we get these, Mom? I want to sketch them.”  I think we’ve discovered a new passion in him. 🙂