We homeschool year round and our new school year has just begun. This year marks a huge transition in our home with one child entering junior high and another entering high school. Though we are not beginning new educational resources or curriculum until August, July provides us with an opportunity to reflect on what resources we have enjoyed, what courses we will be taking in the coming school year, and what resources we want to purchase.

We are excited for this new school year. With both kiddos increasingly independent in their studies, I trust we’ll be learning a wide variety of skills and material. Below are a few of our tried-and-true favorite educational resources and a couple we look forward to adding to our curriculum.

If your child is interested in Minecraft, architecture, languages, or you name it … you can transform your child’s interests into a fun lesson. Keep scrolling to check out what’s new and what’s popular.

3D Animation Course – My son is passionate about Minecraft and is intrigued by the 3D character animation concepts in this year-long online course where he learns to create animated short movies using his favorite Minecraft characters. How cool is that!?

Mixing with the Masters: A New Twist on the Old Masterpieces – My daughter and I just love Alisha’s style and are delighted to learn about the masters through her mixed media art workshop. Mixing with the Masters is the first of several volumes that will be released over the course of this year and the next.

North Star Geography Online Class – We absolutely LOVE the geography curriculum by Tyler Hogan. Now North Star Geography is offered as an ebook and audiobook, automatic grading of each lesson’s quiz & mapwork, and a direct helpline with the author. Perfect for an on-the-go family like us!

Learn to Code with Minecraft – One of my son’s favorite things to do is to modify the Minecraft game with special mods. With this year-long online course, kids learn Java programming skills to code their own Minecraft mod from start to finish. They will delight in watching when their work results in a unique, shareable Minecraft mod that they built from scratch.

Life of Fred High School Math Books – Say good-bye to drill and kill exercises. We’ve been using Fred since middle school and my kids love the approach. Instead of nothing but dry exposition and endless drill exercises, they contain fun stories about Fred Gauss, a child prodigy math genius. 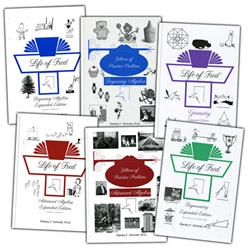 Online Language Program – My daughter loves languages and has set out to add Italian to her repertoire. Don’t miss this incredible opportunity to include foreign language into your next year curriculum. Choose from Spanish, French, German, Chinese, Russian or ESL English Videos, songs, and games help learners become bilingual or trilingual FAST!

Tegu Blocks – I don’t know about your kids but mine still enjoy playing with blocks from time to time, especially when they are watching their young nieces and nephews. Tegu Blocks are magnetic wooden blocks and are just the right size for on-the-go fun. If your teen is an entrepreneur who enjoys babysitting, Tegu Blocks are a fabulous addition to his “bag of tricks”.

Born on June 8, 1867 Frank Lloyd Wright is not only one of the world’s greatest architects, but also the most prolific. He was controversial. He was inspiring. He was a visionary. A writer, an art collector, a philosopher. To honor Wright, I have put together a mini-unit to introduce students to his architectural style and the science of architecture. 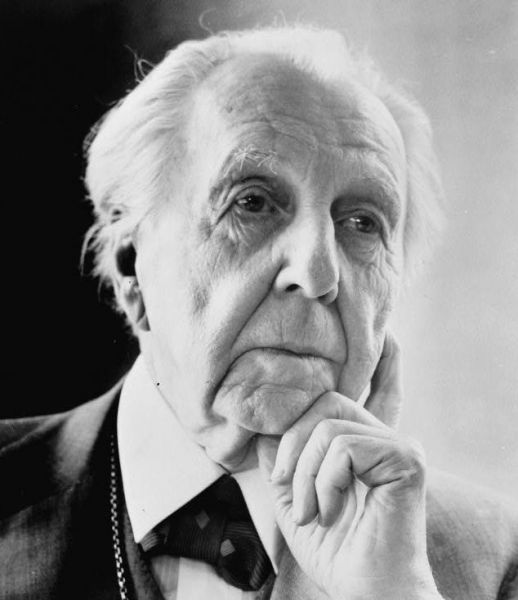 Frank Lloyd Wright spent more than 70 years creating designs that revolutionized the art and architecture of the 20th century.  He designed 1141 works – including houses, offices, churches, schools, libraries, bridges, museums, and many other building types. Of the total, 532 resulted in completed works, 409 of which still stand.

Whether people are fully conscious of this or not, they actually derive countenance and sustenance from the ‘atmosphere’ of the things they live in or with They are rooted in them just as a plant is in the soil in which it is planted.

His career is generally divided into three periods. and he is widely known for four styles of building. His work during the first period (1893 – World War I) was primarily located in the Midwest and brought forth a new American architectural style – the Prairie Style; born out of his belief that we needed fewer, larger rooms which flowed more easily, his antithesis to the rigid Victorian era architecture. These long buildings stretched out along the flat Midwestern landscape, their horizontal orientation emphasized with bands of windows and spare ornamentation.  Low-pitched roofs with broad eaves served to relate them to the grown, creating shelter in the open.

Between World War I and the mid-1930s, Wright is noted for his commission of Tokyo’s Imperial House and his series of textile block houses in California, hence the Textile Style was born.  This later led way to the Organic Style and then the Usonian Style. His belief that buildings should be made from the land and benefit the land inspired most of his work. These beliefs, avant garde for his time, are still practiced and revered today. He advised his apprentices to,

… study nature, love nature, stay close to nature.  It will never fail you.

The kids and I have had the opportunity to see two of Wright’s works in person, the Gordon House in Silverton, Oregon and the Pilgrim Congregational Church in Redding, California. Sadly, Wright passed away before he saw either of these two buildings constructed. 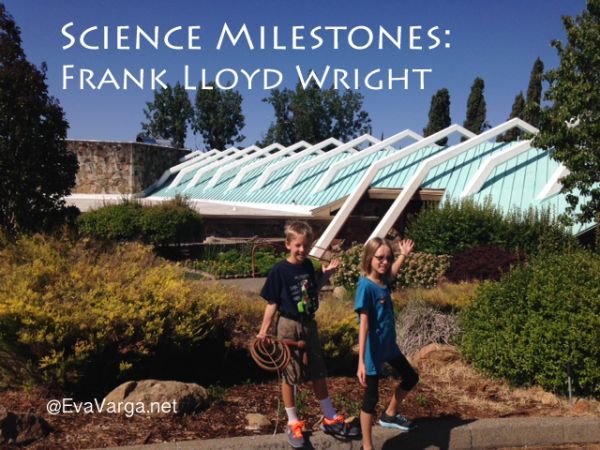 The 88-year-old Wright designed the Gordon House, commissioned by Conrad and Evelyn Gordon, in his Usonian style in 1957 for the couple’s sprawling farmland acreage that overlooked the Willamette River in Silverton about 30 minutes south of Portland. It wouldn’t be until several years later that the home would actually be built (1964). The Gordon House proved to be Wright’s final Usonian design.

The Pilgrim Congregational Church was designed by Frank Lloyd Wright in 1958. Sadly however, due to lack of funds, the church was able only to construct a small portion of Wright’s original grand design back in the early 1960s. Built by the church members themselves, the building’s realized section represents only about 20% of the proposed structure. An unusual feature is his use of triangles (which symbolizes the Trinity) in the structure of the church.

Math, science, art, writing, research, history, and project management are all subjects easily integrated into the study of architecture. Depending upon the age and interest of your child, you may wish to put together a comprehensive architectural unit study. Alternatively, younger students may enjoy a simpler approach, reading a short biography of Wright and marveling at photographs of his completed works. Here are a few ideas to get you started: