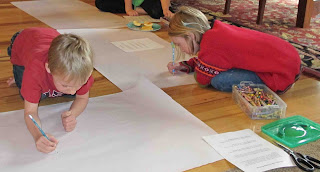 To begin, I provided the kids with just a few simple materials (a D cell battery, 1m of copper wire, 2 large paper clips, and a magnet).  With these materials, the kids worked to create a simple motor.  Illustrated step-by-step instructions were provided and when they encountered problems, suggestions were made.  Most of the students were successful eventually, though there we did experience a little frustration as well leading me to believe that perhaps the activity was too difficult for this age. 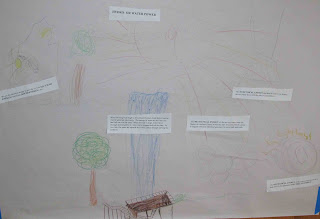 While they worked, I asked numerous questions to elicit their prior knowledge about electricity and the sources by which it is generated.  The kids were aware of only three:  wind, water, and fossil fuels.  With each, I described in detail how electricity is generated, emphasizing the common thread of a generator or huge magnet within a coil of wire that is moved back and forth rapidly. 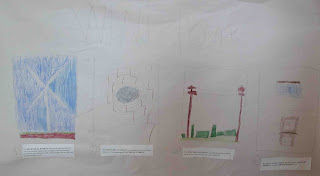 Thereafter, I allowed each child to select an energy resource of choice with which they were instructed to create a poster to illustrate the path of electricity from it’s natural source to our home.  Captions were provided so essentially, each child needed only to illustrate the steps as outlined on their paper.
Upon completion of their posters, we engaged in a discussion of the benefits and risks of each energy source.  It was a successful lesson and in the days that followed, I enjoyed listening to the kids point out to their father the transformers around town.

When we drove to Portland later in the week, their interest and understanding of Detroit and Big Cliff Dams along the Santiam River were magnified.  Coincidentally, the Oregon Field Guide episode that aired this week included a segment called Hot Fish, Cold Fish which looks at the impact of the dam on the ecology of the river.  I just love it when our lessons coincide with unplanned life experiences.