We are a family that loves to play board games. Many of our favorites are games that are less commonly known to the general public.  I’m not sure why that is .. but my guess it is because the games we play and enjoy most are not available at national box store chains.  Rather they are sold at independent game stores.  Of course, they are available online as well but we’d rather support the local guy when possible.

The most recent addition to our larder is Dixit. We received the original version as a gift this past summer and have enjoyed playing it on multiple occasions.  Each player at his turn plays the storyteller. He chooses a single picture from his hand of six and tells a short paragraph, a sentence, or even a single a word connected to his picture.  Then each player chooses one of his pictures that best matches the story.  The cards are then mixed up and placed on the table face up.  Each player then bets upon what picture was the storyteller’s. 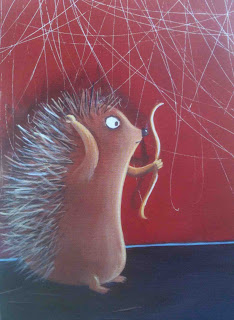 The munchkins absolutely love this game.  It is suggested for ages 8 and up but younger children can be successful as well as there is no reading required.  The illustrations are fabulous … even inspiring us to create our own, though expansion card sets are available.  Another great thing about this game is that the cards can be used as story prompts and thereby integrated into your language arts curriculum.