. It is designed to help anyone (particularly children) to recognize 40 classical music themes, to know the name of the composer of each theme, and to be knowledgeable about and love classical music.

These past two weeks I have been donning a new hat as I substitute for an elementary music teacher. I will see each class four times and thus this book is perfect – one lesson each for the Baroque, Classical, Romantic, & Modern periods of music. All of the classes – kinder to fifth have really enjoyed it!! ‪ 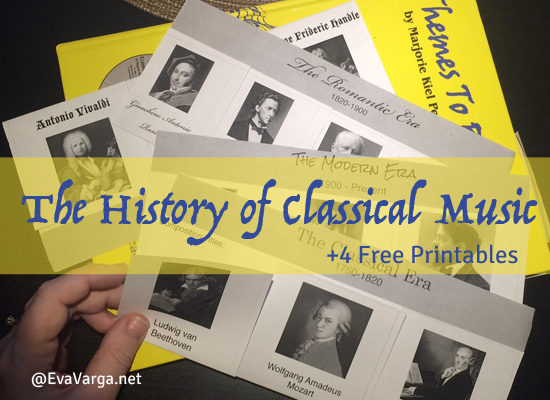 “Don’t only practice your art,
but force your way into its secrets,
for it and knowledge can
raise men to the divine.”
~ Ludwig van Beethoven

Over the weekend I was inspired to create a foldable for each of the musical eras we have covered: Baroque, Classical, Romantic, and Modern. I am delighted to now share these FREEBIES with YOU!! Read on to get the download links.

I have also created an outline to summarize some of the material I covered in each lesson.  I only had time to cover three-four composers from each era, Themes To Remember

covers much more. I highly recommend the book if you desire to integrate classical music into your curriculum.

The music was very ornate with lots of trills and grace notes.

1750-1820 – Composers wrote mostly for the rich upper classes, the aristocracy

The music stressed control of form and emotions

1820-1900 – Composers wrote for the rising middle class, much of the music was composed to accompany fairy tales

he music stressed the dignity and freedom of man, nature, the hero-warrior, and emotion

The Piano Guys – One Direction: What Makes You Beautiful

1900-present – Composers began to experiment with new forms, harmonies, and rhythms more than ever before.

New styles of music were developed including jazz, electronic, pop, and reggae.

I have had a fabulous time teaching this mini-unit. It is so fun to share with kids the joys of classical music. Several kiddos have come up to me at recess to share that they googled The Piano Guys when they got home. Others have given me high fives and hugs in the hallway. A mother (and teacher in the building) told me her child (in kinder) came home and exclaimed, “Did you know Vivaldi and Bach were composers?” So very cool.