Zǎochenhǎo (早晨好) !  I’m delighted you are following along with us as we tour China, city by city.  We recently returned from a three-week family holiday in China. This is the sixth of ten posts whereby I introduce you to the culture of China through our eyes. Our focus today is the Buddhist influence in China and our visit to the Dàfó (Giant Buddha) in Leshan.

About 120 km (75 mi) from Chengdu, Leshan translates literally to Happy mountain. It is  located at the confluence of the Minjaing, Qingyijiang, and Dadu rivers, on the southwestern fringe of the Red Basin.   We took the bus from Chengdu to Leshan (about 2 hours).

Buddhism has flourished in China since ancient times and has played an enormous role in shaping the mindset of the Chinese people, affecting their aesthetics, politics, literature, philosophy and medicine.  Scholars classify Chinese Buddhism into 7-15 schools (most commonly 10).  Perhaps the greatest Buddhist influence occurred during the Tang Dynasty, evident in the many scripture-filled caves and structures surviving from this period.

The Leshan Giant Buddha (乐山大佛) was built during the Tang Dynasty (618–907AD). It is carved out of a cliff face that lies at the confluence of the Minjiang, Dadu and Qingyi rivers in the southern part of Sichuan province, near the city of Leshan. The stone sculpture faces Mount Emei, with the rivers flowing below his feet. It is the largest stone Buddha in the world and it is by far the tallest pre-modern statue in the world. 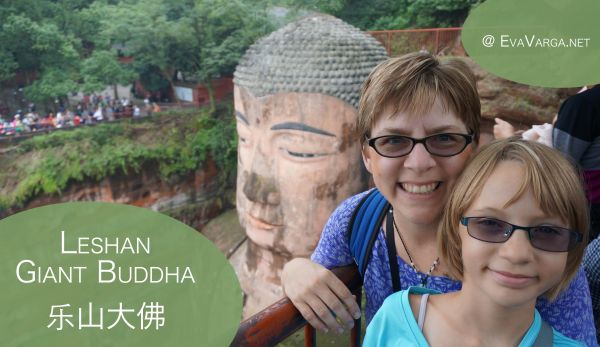 Construction was started in 713, led by a Chinese monk named Haitong. He hoped that the Buddha would calm the turbulent waters that plagued the shipping vessels traveling down the river. When funding for the project was threatened, he is said to have gouged out his own eyes to show his piety and sincerity. Apparently the massive construction resulted in so much stone being removed from the cliff face and deposited into the river below that the currents were indeed altered by the statue, making the waters safe for passing ships.

The charm of the Buddha lies not only in its size but also in its architectural artistry. There are 1,021 buns in the Buddha’s coiled hair. These have been skillfully embedded in the head. The skill is so wonderful that the 1,021 buns seem integral to the whole. Another architectural highlight is the drainage system. Incorporated into the Leshan Giant Buddha when it was built, it is still in working order. It includes drainage pipes carved into various places on the body, to carry away the water after the rains so as to reduce weathering.

It’s possible to walk from top to bottom (and back up again) along a staircase carved in the wall overlooking the Buddha. A popular activity near the head is for people to have their photo taken “touching” the nose or sticking their finger in the ear of the buddha, supposedly for good luck. Behind the Buddha’s head, you can step into the cave that Haitong took shelter in while he oversaw the construction of the Buddha. 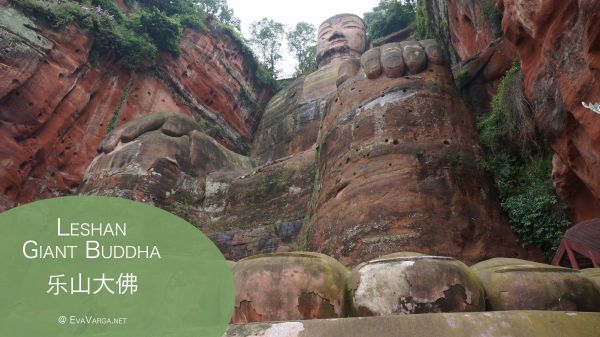 There was a moderately large crowd visiting on the day we visited; we walked down to the feet among them. Then we walked back up the other side – to the grumbling of the kiddos who were both tired of the stairs and getting hungry. There’s no food to be found in the park so we departed.

It took some time to hail a taxi, we were even getting a little worried, but one arrived soon enough and we returned to the bus station.  We enjoyed a delicious bowl of noodles at a small restaurant near the station before returning to Chengdu in the evening. 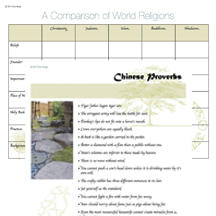 I have created a couple of notebooking pages to correspond with today’s post.  The first is a list of Chinese Proverbs that you may find inspirational.  You may wish to have your children create small posters to illustrate a proverb or two. The second is a chart to compare / contrast the World’s Religions.  I first created this when my children and I were studying ancient times and though they were young at the time, we found it very interesting.

We are off to Shanghai tomorrow. Shanghai is a huge city – there is so much to see and do but I’ve condensed it into one post. You won’t want to miss it for I’ve created a fun activity sure to be a hit with young engineers.

This post is part of the iHomeschool Network’s Autumn Hopscotch, a 10 day series of posts by over 40 different homeschool bloggers. You can visit the hopscotch home page at iHN for ideas and inspiration in topics like Great Science Books and Early American History for Kids. There are literally hundreds of posts now compiled for you!