My daughter plans to take the SAT exam this summer. However, she feels that she is rusty and needs to brush up on her math skills. We thereby wanted to an SAT prep course to freshen her memory on concepts taught in algebra and pre-calculus.

As most of my readers know, my kids are dual enrolled at the local community college. I thereby spend more time in the role of chauffeur than as teacher. In fact, I do very little direct instruction with either of them anymore.

My daughter has been taking courses full time at the college for two years now and has just completed the first year calculus course. She has done very well and this fall, she will begin tutoring.

It was thereby a surprise when her first SAT scores came back last year. She took the exam twice (once in the fall and again in spring) and yet her math score remained the same. Though she surpassed the benchmark, she didn’t feel it was a true reflection of her ability. After all, math is her favorite subject (next to foreign languages) and she excels in the classroom.

She has thereby challenged herself to take the SAT a third time at the end of the summer. In order to brush up on the skills tested on the SAT, she wanted an SAT prep online program she could use at her pace – to set her own schedule and course plan to help her review and practice. Teaching Textbooks is a math curriculum designed for independent learners – perfect for her! Best of all, the first 15 lessons of any level are free. Try one level or every level with no obligation with this link, Teaching Textbooks.

I received access to this product in exchange for a review. I was compensated for my time and was not required to make a positive review.

One of the main features of Teaching Textbooks is that it provides step-by-step explanations for every single problem in a multimedia form. The lessons are written directly to the student and do not assume the presence of a teacher.

Students can thereby work through the material independently in just three easy steps: watch the video tutorial, do the practice problems, and if you error, an audio tutor explanations the solutions.  The explanations are clear and complete and plenty of practical examples are provided throughout the curricula.

The program is very easy to use. Teaching Textbooks is a particularly good choice for the student who might have struggled with other math programs and needs a less pressured pace and style of delivery. While my daughter does not struggle, she likes that she can move along at her own pace and even skip sections when she is comfortable with the material.

Though it is not considered a specific SAT prep course aimed at testing strategies and SAT question format, it provides practice with the content of high school level coursework. We opted for Pre-Calculus but the high school courses also include Pre-Algebra, Algebra 1, Algebra 2, and Geometry.

Her test isn’t until the end of August so we do not yet know her newest score. However, she is enjoying the program and has expressed that she feels more confident.

At the college, she has alternated between two professors and had become accustomed to their word choice and approach. She states that the vocabulary and the specific wording of the problems in Teaching Textbooks has challenged her to more carefully analyze each question. It has also given her practice with another approach to solving each problem.

Regardless of what her score may reflect, her comfort with the material is what is important. As a tutor, this flexibility and confidence will serve her well.

Teaching Textbooks now works a little differently than previous 2.0 versions. The academic content is the same as always but the course is now delivered online as a 12-month subscription. Also, physical books have been replaced by eBooks. No more discs!

The 3.0 version of Teaching Textbooks course material is easy to access from computers, tablets, or phones. This makes it easy to access from anywhere! If you prefer a more traditional textbook, an electronic textbook is available and includes a printing option.

Because all of the content in 3.0 is available online, the price is significantly lower. With 3.0, you purchase a yearly (12-month) subscription for one child and one course. Large-family discounts (for families with four to eight students) are also available.

You can find placement tests on the publisher’s website to guide you in selecting the appropriate course. The series is a college prep curriculum though it is not as rigorous as some other courses.

NOTE: The Free trial does not require a credit card and does work for the first 15 lessons with no time limit. You may try any level or all of the levels.

Because we were using the course to review for the SAT exam, we were not concerned with the grading options. However, I was intrigued to discover that grades can be accessed anytime from anywhere (even after a subscription has ended).

For additional study materials organized by exam type, visit Exam Prep Books, over 20 exams types from which to choose.

As a homeschool parent, I want to challenge my children. I want to provide them with opportunities not available to students in brick-and-mortar schools. I spent a lot of time researching and seeking out course work and math curricula that was engaging and challenging.

Years ago, a homeschool colleague shared with me that her 14 year old daughter had taken the college placement exam and had enrolled in Math 111. I immediately wanted to know what math curricula she had used. “Life of Fred,” she replied. “Chloe worked through the Pre-Algebra series and Beginning Algebra on her own.” 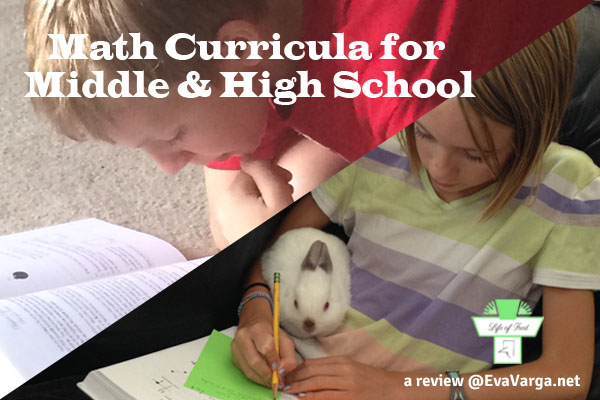 Disclosure: This post contains affiliate links which generate commissions when you purchase through that link.

Each Life of Fred text is written in the style of a novel with a humorous story line. This was very appealing to my oldest, an avid reader. Each section tells part of the life of Fred Gauss,  a five year old who teaches math at KITTENS University in Kansas.  The story shares how, in the course of his life, Fred encounters the need for the math and then learns the methods.

As she progressed through the books, she gradually transitioned away from direct instruction whereby I was teaching concepts to her and began to rely more on her own reading. She became an independent learner.

Never again hear the question which many math students proclaim: “When are we ever gonna use this stuff?” or “Math is boring!”

Life of Fred makes this possible not only through story but with tons of solved examples. Each hardcover textbook contains ALL of the material – more than most instructors cover in traditional classroom settings.

We meet with Fred daily and have really enjoyed his adventures. I thought I’d share our experience with Life of Fred since people often have a lot of questions about it.

What I Love About Life of Fred Math Curricula

I love the story nature of the text and real life problem approach. Fred encounters a need for the math and then uses it, usually within the context of a humorous situation.

It encourages a different approach to attacking a problem. Students are encouraged to think.

Less drill and more complex problems. This lessens boredom and fatigue and leads to increased accuracy.

The texts are non-consumable; I can use them with both kids. I’ve never been a fan of workbooks; I love that they work out the problems on ordinary notebook paper.

The cost is budget friendly. The middle school texts are just $17 and the high school texts start at just $28 at Educents. You can’t go wrong even if you just wanted to try it out. 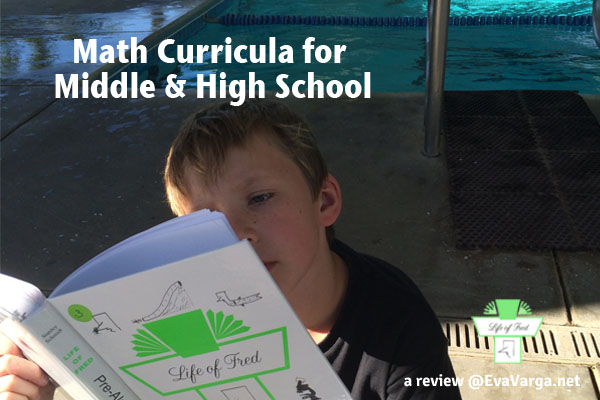 My kiddos had completed the Singapore Math curricula series for elementary and middle school, so this is where we actually started. They were immediately hooked on Fred’s story and have loved to read about his humorous antics.

… you are ready to start Life of Fred Fractions, the first book in the Pre-Algebra series. 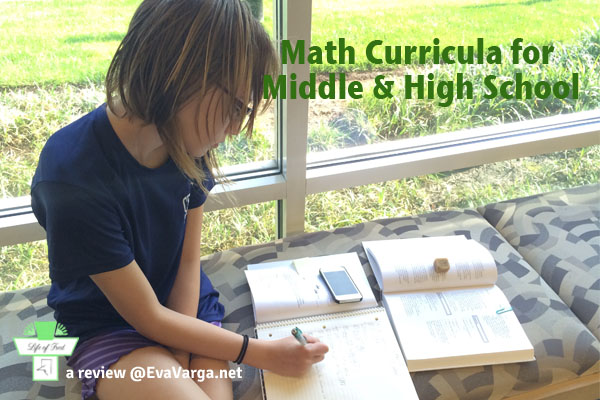 My kiddos were already familiar with Fred’s style and approach to problem solving as they had previously completed the Pre-Algebra series.  They loved that they weren’t required to do a bunch of drill-and-kill problems. When they struggled with a concept, they simply re-read the chapter.

My daughter is currently using the Advanced Algebra text. When she was about mid-way through the text, she actually made the decision herself to begin it again. We had been doing a lot of traveling and she hadn’t been going through the lessons regularly. Repeating the textbook helped to clarify the concepts that were previously foggy for her or that she didn’t recall from earlier readings.

… you are ready to start the first book in the high school series, Beginning Algebra.

Titles in this series:  Zillions of Practice Problems: Beginning Algebra,