We awoke aboard the Hurtigruten and enjoyed a light meal that I had packed onboard.  We spent the morning enjoying the views from the observation deck and working on our journals.  Oddly, another passenger – an older gentlemen (a description I now am not certain applies to this man) – whom sat a few chairs from us stared at us the entire time (for hours!).  He would occasionally turn to his companion when he was addressed but he didn’t take part in conversation of any sort and even stranger, made no discernible facial expression.  I wanted to go up to him and inform him that he had it all wrong .. the attraction was beyond the window … not aboard the ship.  Please stop staring, sir!  I should have taken his picture, I now suppose.  Anyway …

In the early afternoon, we came into Bergen harbor.  Bergen was perhaps the most anticipated destination of our entire Scandinavian tour as it is here that we would be staying with family and meeting many relatives that we in fact had never met previously.  It took awhile to disembark as the crew insisted we in order of the level our cabins were located to alleviate confusion with our luggage.  We thereby were able to see Reidar (the one cousin we had in fact met a few years ago when he came to Oregon) from the observation deck as he waited on shore for us.

We were welcomed with a warm hug (he is much like a gregarious and jolly uncle) and our tour of Bergen was underway.  He first took us to Troldhaugen, the home of Nina and Edvard Grieg. Built in 1885, the couple lived there the last 22 summers of Edvard Grieg’s life.  In May of 1928, Troldhaugen became a museum.  After WWII, permanent employees were hired to manage and operate the museum which then consisted of the villa, the composer’s hut and the gravesite.  In 1985 the concert hall, Troldhalen, was inaugurated and in 1995 the museum building opened.  We enjoyed the permanent exhibit in the latter, purchased a CD of Grieg’s music and spent a little time exploring the grounds and original buildings. 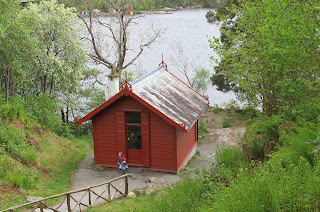 We enjoyed seeing the photographs and gifts Grieg and his wife had received from friends and family.  Most notable was a painting of children playing that he and his wife had purchased after the death of their only child.  Proving he was a little boy at heart, Reidar reached out and played one brief note on Grieg’s piano, receiving a scowl from the interpreter leading us on the tour.  I was just glad it wasn’t my little one .. he later said, “I couldn’t resist. I was in his home. I needed to play even if just one note.” 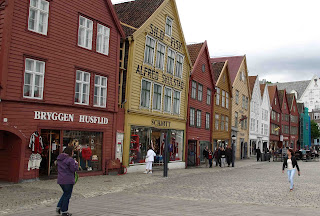 From here we ventured to the Fløibanen Funicular, one of the most popular attractions in all of Norway.  Only 150m from the Bryggen wharf (which we had explored briefly beforehand), the ride to the top of Fløyen mountain (320m above sea level) takes only a few minutes.  The ride itself was spectacular and the views improved as we got closer to the top.  Unfortunately, it was raining while we were there but it certainly didn’t dampen our spirits.  Had we had more time, it would have been nice to take advantage of the vast number of hikes on the mountain.

Thereafter, we drove out to Frekhaug to meet Arvid, Reidar’s brother, for the first time and to enjoy dinner together. Arvid came out to greet us with big hugs and told the kids that it was tradition for children to run around his house three times before coming inside.  I joined in and the four of us were off on a giggly jog of the perimeter.  The kids loved it and forever they were smitten with one another. 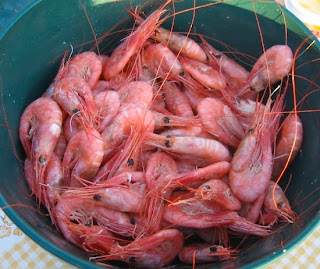 Arvid prepared for us shrimp and a roast chicken. “Just in case you didn’t like shrimp, I needed something else,” he explained. “They aren’t traditionally served together.” Shrimp is a traditional Norwegian dish in the summertime.  Pre-boiled and served cold, you simply peel them one by one and eat them.  Following Reidar and Arvid’s example, we spread butter on a piece of white bread, laid out a few shrimp and then squeezed a little mayonaise (from a tube) and a twist of lemon on top.  I think this might be my favorite Norwegian dish .. simple and delicious.