We departed Rome via coach en route to Sorrento and the Amalfi Coast. Our seats were comfortable and to our surprise, we even had wifi – such a blessing. I love being able to stay in contact with family at home and they enjoy seeing pictures and hearing snippets of our adventures. Not surprising, we loved this region of Italy and hope to return for a more relaxed exploration. 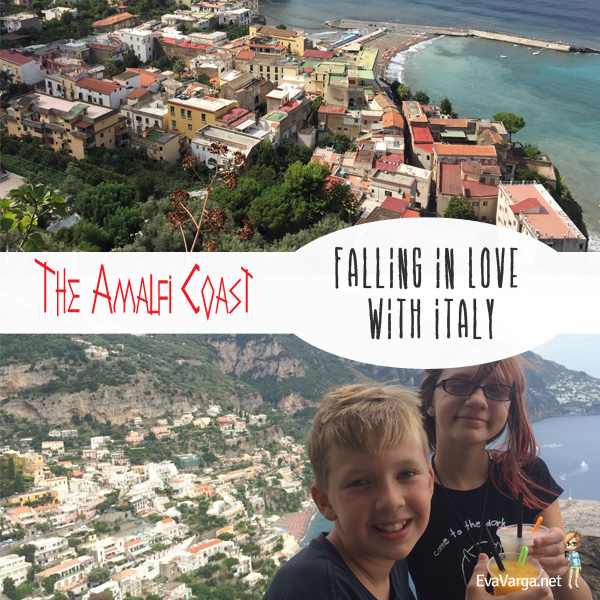 From the coach, we enjoyed a view of the Gulf of Naples and upon our arrival in Sorrento, we were given the opportunity to take part in a tour of a wood factory to see how inlay is done. Since the 16th century, the region has been famous for the local industry of the inlaid wood (marquetterie) made by different natural woods cut out and put together to form elaborate patterns and images.

Patrick and the kids were not interested in the tour (and from previous experience we knew it was a canned program with a hard sell at the end of the tour). We thereby opted to explore the shops and avenues on our own each spurning off the Piazza Torquato Tasso. We discovered many of the shops featured products of citrus fruits, leather goods, and predominately wood inlay – furniture, serving trays, music boxes, picture frames, chess sets, etc.

It would be impossible to imagine the Amalfi and Sorrento Coasts without their charming and extremely fragrant lemon gardens. Lemon groves abound in this region and help the environment by preserving the stability of the soil.

The Sorrento lemon (also called the Limone di Sorrento) is a highly regarded lemon variety whose popularity outside of the United States rivals that of the Eureka. At the turn of the twentieth century Sorrento lemons were sold individually and could only be handled by women who had to have trimmed nails and wear cotton gloves to handle them.

We had browsed several shops when we came to a small wood shop with a gallery near the entrance. When we entered, the elderly proprietor greeted us with a warm, “Preggo!” I browsed around a bit and asked a few questions. He pointed out that his box had inlay both around the base of the box in addition to the lid. I noted that his boxes were also less expensive than those I had previously seen. He assured me he had made it himself. As he wrapped my selection, he showed us his 200 year old scissors and explained that he had learned his craft from his father. “Si! Si, mi papi!” he exclaimed. 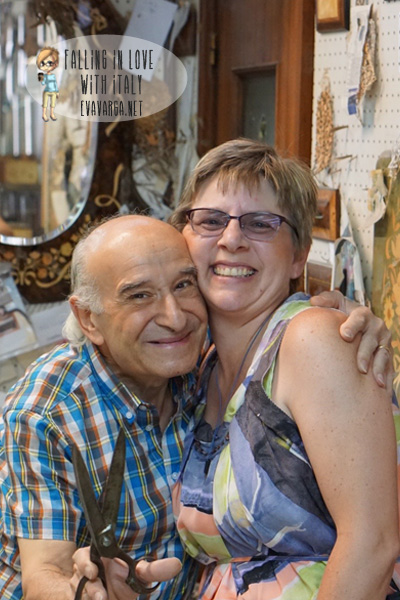 He was so friendly – the epitome of an Italian gentleman. He hugged us good-bye and kissed the back of my hand. Meeting him far surpassed the experience we would have had at the factory tour. He even gave Geneva scrap pieces from inlay projects that lay beneath his faith. Though it was essentially rubbish, it was the patter that she desired to embellish her own art in her sketch book.

Our tummies alerted us to our basic needs, also evidenced by everyone’s growing grumpiness. We thereby settled upon a restaurant serving fish. Thereafter we wandered about the city a bit longer, leisurely taking in the experience. Patrick bought some lemon candies. We enjoyed the view of the gulf from above the Marina Grande. We would have liked to spend the day here but with group travel, we had a tight timeline.

We met up with our group again at 2:30 at which time we divided into two groups. Most took the coach to our hotel (Towers Hotel Sorrento) while a handful boarded a small van and from there proceeded to drive along the Amalfi coast to Positano on the other side of the peninsula. This coastal road is very narrow and congested. At one point becomes a single, one-way lane that zig zags along the Amalfitano coastline.

The views were magnificent. We stopped at an overlook for photos. Here we sampled limoncello (29% alcohol) and fresh sliced peaches from a local vendor. I bought each of the kids a granita – which they agreed was, “Delicioso!”

When we reached the village of Positano, we parked and proceeded down to the beach by foot. The path was lined with a variety of shops, art galleries, restaurants, and vendors all along the way. 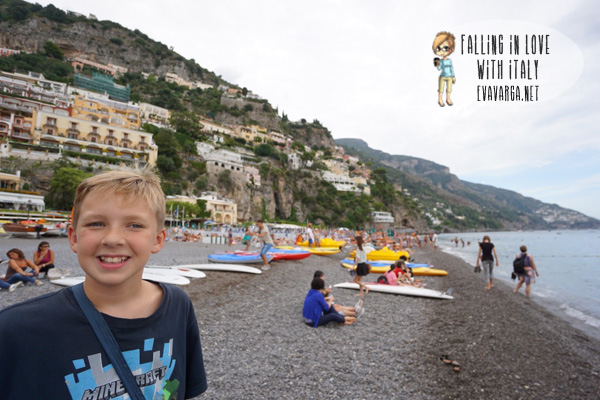 Upon reaching the shore, Geneva and I immediately took off our shoes and dug our toes into the sand. We would have loved to cool off with a swim but we hand’t been informed we would have time and thus we didn’t bring our suits or towels. We were a little disappointed.

We walked back up at 5, stopping briefly at La Zagara for a gelato – berry for Jeffrey, lemon and peach for Geneva, peach and cantaloupe for me, and chocolate for Patrick. After a long delay (several fellow travelers misunderstood the return time and/or got lost), we returned to the van and drove back to the hotel.

After an unremarkable dinner at our hotel, we walked around the property a little. Jeffrey found a piano tucked away in the corner of the lobby and he entertained our tour group before we all decided to retire for the evening.

This post is part of a five-post series, The Italian Scene: Falling in Love with Italy.  Join me tomorrow as I share our experiences in Assisi & Pompeii.