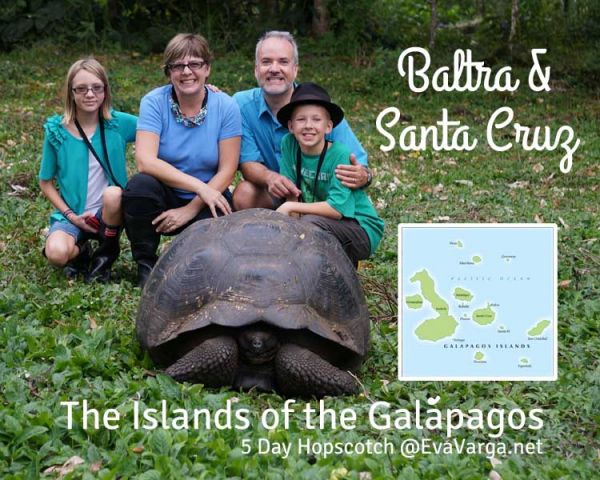 This is the first post of a five day hopscotch series. Join me each day this week as I share with you our discoveries in the Galápagos Islands.

Isla Baltra is a small, flat island located near the center of the Galápagos. Created by geological uplift, the island is very arid and vegetation consists of salt bushes, prickly pear cactus and Palo Santo trees.

During World War II Baltra was established as a United States Army Air Force base. Crews stationed at Baltra patrolled the eastern Pacific for enemy submarines and provided protection for the Panama Canal. After the war, the facilities were given to the government of Ecuador.

Today the island continues as an official Ecuadorian military base. The foundations of buildings and other remains of the US base including the old airfield can still be seen on the island.

Upon arriving into Baltra, all visitors are transported by bus to one of two docks. The first dock is located in a small bay where the boats cruising the Galápagos await passengers. The second is a ferry dock which connects Baltra to the island of Santa Cruz via the Itabaca Channel.

We were transported to the ferry dock and from there, boarded a panga with which we crossed the Itabaca Channel to Santa Cruz.

Situated in the center of the archipelago, Santa Cruz is the second largest island after Isabela. Its capital is Puerto Ayora, the most populated urban centre in the islands. There are some small villages whose inhabitants work in agriculture and cattle raising.

The island is a large dormant volcano. It is estimated that the last eruptions occurred around a million and a half years ago. Upon our arrival, we boarded another bus and drove up into the highlands of Santa Cruz  which offer exuberant flora and are famous for a gigantic lava tunnel that is over 2000 meters long. Along the drive, we were fortunate to observe a Galápagos Rail (an endemic, flightless bird) on the roadside but sadly we weren’t able to capture a photograph.

We enjoyed a wonderful lunch al fresco (the first of many) and from our table could watch giant tortoises doing the same. Thereafter we put on our wellies (which were provided for our use) and were then guided around the property. Here, we observed the large tortoise populations up close. Though it is rare to see females in the highlands (they nest in the dryer area of the lowlands) – we did see one.

We visited the highlands once again on our sixth day – touring the property of a cattle ranching family where we were able to walk around at our own leisure. It was here that we enjoyed a little spelunking in a lava tube. It reminded us of the lava caves in Central Oregon and Hawai’i that we’ve explored previously.

We drove up to Cerro Mesa for a fabulous view of the island. It was quite overcast and cloudy but the view was incredible. A short distance from the peak was a huge crater with steep walls that were covered in diverse, lush vegetation – even cactus. 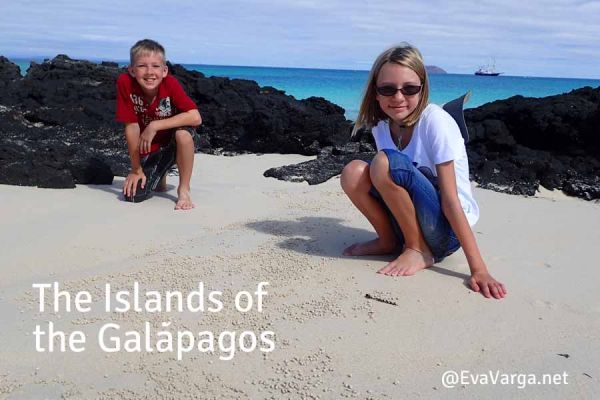 On our fifth day in the islands, we spent the morning on Playa Las Bachas sunbathing and exploring the fringes including a small brackish lagoon where we hoped to see flamingos.

Snorkeling near the shore, I loved seeing hundred of sea cucumbers, evidence that the fishing restrictions were aiding in the comeback of these echinoderms. [I had read about the illegal harvesting of sea cucumbers in Galapagos at the Crossroads: Pirates, Biologists, Tourists, and Creationists Battle for Darwin’s Cradle of Evolution 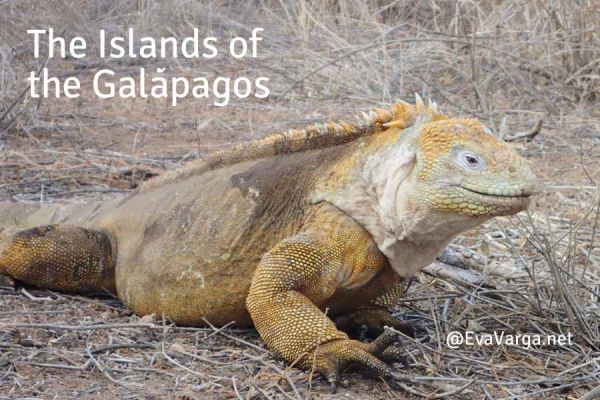 In the afternoon, we hiked along a trail near Cerro Dragón where we observed land iguanas foraging. The area is also known for its flamingo lagoon but these elusive pink birds eluded us all week. It was here on this hike that we really began to understand the geography of the islands [Developing Map Skills in the Galápagos].

The Charles Darwin Research Station (CDRS) and the headquarters of the Galápagos National Park Service (GNPS) are located on Santa Cruz. The GNPS and CDRS operate a tortoise breeding centre here, where young tortoises are hatched, reared, and prepared to be reintroduced to their natural habitat, which we visited on the afternoon of the sixth day of our 8-day voyage.

The hatchlings we observed were just a couple years old. They remain in captivity – gradually moving from one enclosure to another – each with less ‘protection’ and a more natural environment. Hatchlings are highly susceptible to predation so the efforts at the research station have dramatically improved the population numbers. 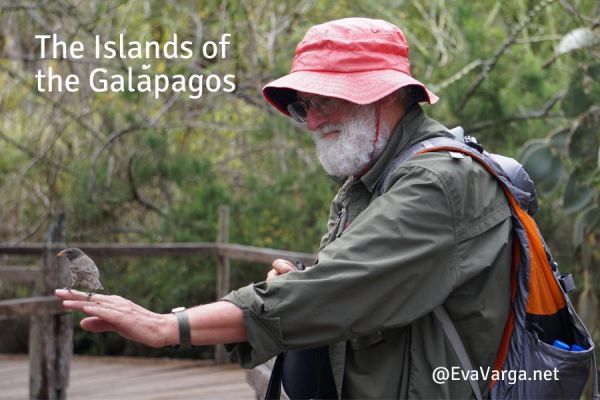 Here, were also had the opportunity to see saddleback tortoises, two of whom had been “roommates” with Lonesome George who sadly passed away just two years ago.

The most memorable moment at the research station was watching “Charlie” – one of the tourists in our group – befriend a little cactus finch. The finch was so curious, she must have spent 10 minutes hopping about on his arm and shoulder, pecking every now and then. It was clear that the nickname we had given him was well suited. 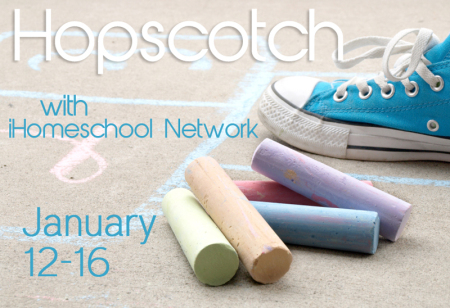