Oslo’s Vigeland Sculpture Park is unlike any other; it showcases the work of only one man—Gustav Vigeland. Vigelandsparken was mostly completed between 1939 and 1949. It’s the world’s largest sculpture park by a single artist and according to the Vigeland Museum’s website, the park boasts more than 200 sculptures in bronze, granite and wrought iron. 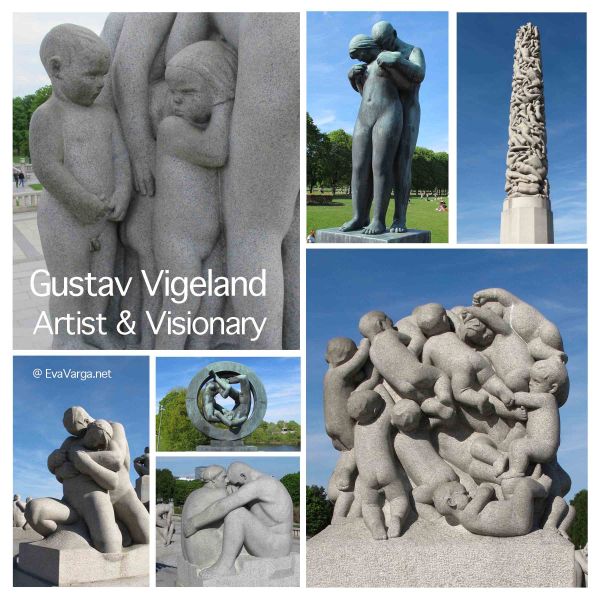 In 1921 Vigeland, already an established artist, made an agreement with the city of Oslo. In return for a home and studio at Frogner Park, Vigeland would create a park built around the bulk of his work and it would forever belong to the city.

“I was a sculptor before I was born. There was no other path, and no matter how hard I might have tried to find one, I would have been forced back.” – Gustav Vigeland

I first discovered Gustav Vigeland when we visited the park in May of 2011.  I’ve never been as touched by any piece of art in my life. I could recognise myself, people I love, people I know, what we feel, and what we have felt, in almost every single sculpture in the park. I would look at a sculpture, walk away and look at several others, turn around, and then return to the same sculptures over and over again. The concern on a father’s face, an elderly man’s frailty, the joy in a mother’s smile, each emotion he captured held me enraptured for hours.

For 20 years, the last two decades of his life, Vigeland lived and worked here, creating more than 200 projects for the park. The work includes the impressive entrance, impressive two-dimensional iron gates, a bronze fountain with a tableau of the circle of life. The pinnacle is a five-story monolith of the bodies of men, women and children—more than 120 figures—carved from a single column of solid granite.

The theme of the garden is life and all its stages. Vigeland’s figures show mankind from birth to death and the sculptures are arranged in groups along a series of pathways.    The figures, especially those in granite, are massive, but there is a striking delicacy to each piece.

The bridge leading from the entrance to the crest of the hill is lined with more than 50 bronze figures, including the famous Sinnataggen – a furious toddler captured in full tantrum. The figure of the angry baby has become the park’s signature and his left hand shines from the constant touching and rubbing of visitors. My kids loved this one, of course.

Beyond the bridge is the Fountain, a massive sculpture of six men holding up a large basin who give water to life, nature and mankind, surrounded by 20 bronze groups of trees and human figures represent the never ending circle of life. The huge basin of water in the fountain is a symbol of the burden of life. It represents life’s struggles. It is thought that the man struggling under the weight of the dish was Vigeland himself. Vigeland had lost contact with his children after he separated from their mother. This is the oldest part of the park. It was built between 1906 and 1914, but was not erected in the park until after his death.

The highest point in the park, to which all the paths lead, is the Monolith, an intricate pillar with 121 figures carved from a single block of granite. The imagery is said to represent humanity’s yearning for a higher spiritual plane. Three stone carvers worked fro 13 years carving the Monolith. It is 17 metres tall and is hewn from granite. It depicts 121 figures which coil around each other with a child on the top. Around the Monolith are 36 large granite groups of figures depicting human relationships of various kinds.

Adolf Gustav Vigeland was born on the 11th of April outside Halse og Harkmark in Mandal, Norway in 1869. He was born to Anne and  Elesæus Vigeland. His father was a master cabinetmaker. Gustav was interested in wood as a medium too, but he wanted to carve it, not make cabinets with it. He went to Oslo at 15 to apprentice at wood carving. His education was put on hold when his father died and Gustav returned home to help support he family. By 1888 he was back in Oslo studying under sculptor Brynjulf Bergslien. In 1889 he premiered his first work, Hagar and Ishmael.

In the early 1890s, he traveled to Copenhagen, Paris, Berlin and Florence. His stay in Paris, studying  at Auguste Rodin’s studio had a particular influence on the young sculptor. Themes of life, death and love — at once intimate and grand in scale — made their way into his sculpture. His works were well received in art circles and by critics, but Gustav found he couldn’t make a living sculpting naked images of death or love.

He took a job helping to restore the Nidaros Cathedral in 1897 for a few years — it was there that he began to carve dragons and lizards, animals he used later to symbolize sin and the force of nature working against man. He spent a decade carving busts of Norway’s famous writers and thinkers.  He also designed the Nobel Peace Prize which was first awarded in 1901.

Gustav secured an abandoned studio from the city of Oslo starting in 1902. He used the work space for nearly two decades before it was demolished to make way for a new library. At that point he negotiated with the city council for a new workspace; they agreed to provide him with a new studio/living space and he would donate all his future art works to the city.

When he died in 1943 his studio was converted into The Vigeland Museum. Today the museum “houses approximately 1,600 sculptures, 420 woodcuts, and 12,000 drawings, as well as other artifacts such as notebooks, photographs, books, and thousands of letters.  Sadly, we were unable to tour the museum during our visit (it was closed for renovations) but it is on the top of my list for our return. 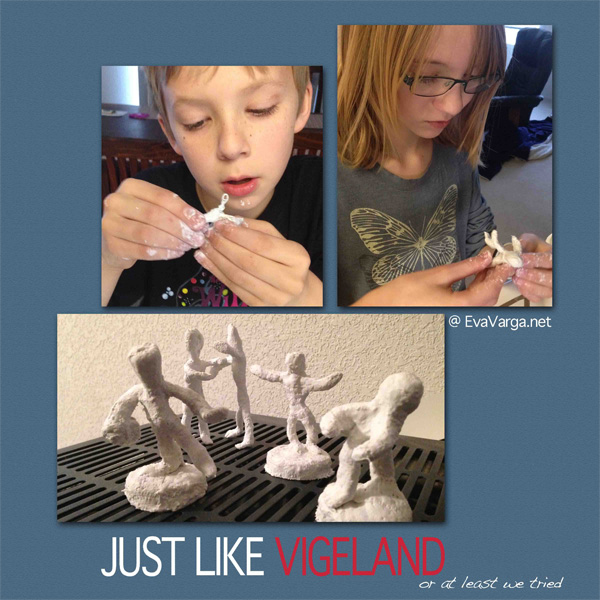 The true magic of Vigelandsparken is the way the sculptor imbued granite and bronze with human emotion. His figures carry the joy, anguish, fear and desire of life. They draw you in and stay with you after you leave.

If you have enjoyed his work and would like to engage your kids in a fun, hands-on art activity, be sure to see my next post, Sculpting with Vigeland, whereby I describe an art lesson I taught my Barnesklubb kids.