We (my husband and I) have been planning a surprise family vacation to southern California for some time.  In preparation, as our excitement builds, it was harder to keep our enthusiasm contained.  On occasion, we would ask the kids, “If you had the choice, where would you most like to vacation?  Yosemite or Disneyland?”  Surprisingly – or perhaps not so surprisingly if you know my kiddos – they would answer Yosemite.  We thereby began to wonder if shouldn’t rethink our vacation plan.  Heck!  We wanted to go to Disneyland … so we proceeded forth with thrusters.  🙂 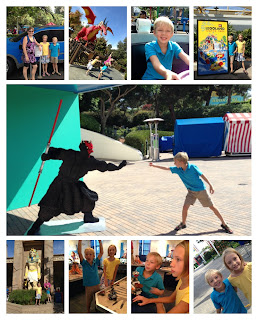 We woke the kiddos early Friday morning and informed them that we were going to southern California and would be spending time at Legoland and Disneyland both as well as a few other surprises.  You would expect that they would leap up and cheer ecstaticly but a las, their response was the complete opposite. They both sat on the floor and looked up at us with dismay, “Really? Okay.”

The first day we did a lot of driving.  Though we departed at 4:30 a.m., we didn’t arrive until nearly 3:00 p.m.  We laid down for awhile after we had checked into our hotel – I believe Patrick even took a short nap. We later walked down to Downtown Disney for dinner.

Our true adventures began today with an excursion to Legoland.  As we awaited opening, the kids were bouncing with excitement.  Buddy even said, “I can’t believe I am here!  I’ve been wanting to go to Legoland all my life.  This is like a dream!”  Finally!! Some enthusiasm is revealed … phew! 🙂

The kids loved the park – they marveled at the life size lego sculptures and the city-scapes built with Legos.  Buddy said he’d like to expand his Lego city .. sadly, I don’t think he has much room in his bedroom.  They also enjoyed taking par in a robotics class whereby they learned how to use the Lego Mindstorms product to build and program a robot to do simple tasks.  I see a Mindstorms purchase in our future. 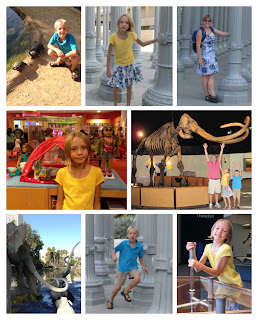 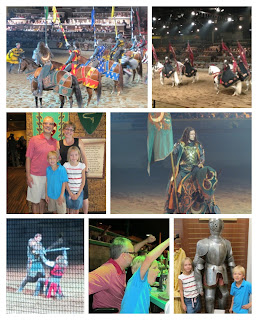 We headed downtown Los Angeles for day #3 .. stopping at La Brea Tar Pits (we did a little letterboxing beforehand), the Los Angeles County Art Museum (to see the street lights – we didn’t go inside), Hollywood Blvd (we just drove through), and a little shopping (American Girl Doll Store, Apple, and Nordstrom’s Rack).

That evening we went to Medieval Times for a thematic dinner.  I found this to be a little cheesy but the little guy absolutely loved it!  “Mom!  Is this your favorite restaurant because it is mine?! 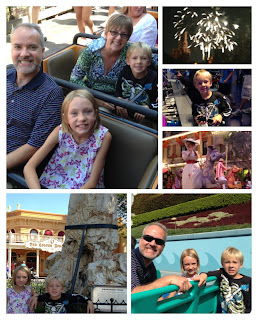 Our first day in Disneyland turned out to be much more crowded than I anticipated.  We had visited the park 5 years ago (Buddy doesn’t remember it) on the same weekend if I recall correctly, and there were few crowds.  Today .. turned out to be a holiday (ColumbusDay) on top of the fact that Arizona schools were on ‘Fall Break’.  Ah well …

We had to force Buddy to go on every single ride.  After his first ride in Legoland (which we also insisted he ride), we knew he would enjoy each one.  The Legoland coaster was a little more stomach churning than we knew the rides in Disney to be and yet after his first ride, he kept talking about how fun it was.  His fears just get the best of him and he’ll hold back so we knew it was the right decision.  If he hadn’t liked the ride(s), we certainly wouldn’t have continued to pressure him. 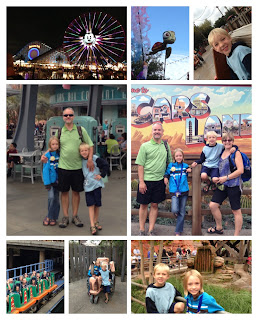 We loved California Adventure.  The new Radiator Springs area – particularly the new ride, Radiator Springs Racers – is awesome.  We all love Pixar movies so we like this part of the park the best.  We also love Soarin’ Over California and California Screamin’ (the only ride the kids did not go on).

While waiting in line (once to get into the park and again in a line for an attraction), we bumped into friends of ours from Central Oregon. It was great to catch up and hear news from home.   It is indeed a small world! 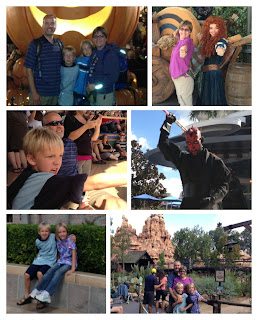 Though we enjoy California Adventure, we returned to Disneyland on our third and final day because there were more things we had not yet seen or done.  Buddy loved the Jedi Academy and was very pleased that he was NOT selected to go up on stage.  Darth Maul took a liking to him though and came over to where he was seated and interacted with him a couple times.  I was seated right next to him so I couldn’t get a great picture of them both together but you can see Buddy’s reaction (he’s using the force to repel Darth Maul) when he approached the second time.

Day #7 – Aquarium of the Pacific 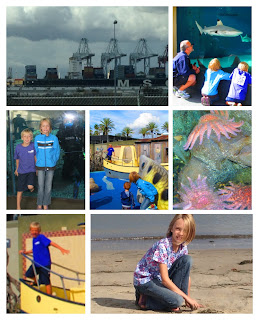 On our last day, we ventured to Long Beach to visit the Aquarium of the Pacific.  We really enjoyed this one – the kids loved finding all the passport stations throughout the aquarium and embossing their books with the images.  Our little pirate climbed on board the ship outside immediately and as he stood on the bow yelling, “It’s a pirate’s life for me!” Sweetie pushed a button on this giant fish and it squirted him dead center.  His surprised reaction was perfect and we all about died laughing!  Fortunately, he took it good heartedly and even asked her to do it again. 🙂

Another long day of driving.  We were sad to leave but a wonderful family vacation full of memorable moments.