Last week, three local utility company employees (two of whom were linemen) spent the morning with us sharing stories and giving demonstrations about energy conservation and electrical safety.  It was a fun-filled atmosphere and everyone learned something new. 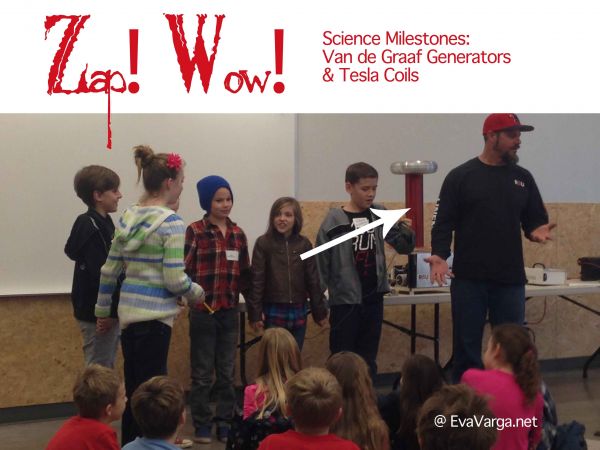 While the lineman were giving their presentation and interacting with the kids, I was as giddy as a school girl.  I recognized the electrical “toy” on the table and was eager to play with it and allow the kids the same opportunity.   As a former teacher in a public school, I had had some experience with a Van de Graaff generator, a device that looks like a big aluminum ball mounted on a pedestal, as a source of artificial high-voltage discharges.  They are great fun in the classroom because when you touch the ball, it makes your hair stand on end as the negatively charged particles build up and push away from one another.  But as a homeschool mom, a Van de Graaff generator just isn’t in our homeschool budget.  I was in for a surprise, however, for the device was not what I thought it was – it was a higher voltage Tesla coil.

A Van de Graaff generator is a device designed to create static electricity and make it available for experimentation. The American physicist Robert Jemison Van de Graaff invented the Van de Graaff generator in 1931. The device that bears his name has the ability to produce extremely high voltages — as high as 20 million volts. Van de Graaff invented the generator to supply the high energy needed for early particle accelerators. These accelerators were known as atom smashers because they accelerated sub-atomic particles to very high speeds and then “smashed” them into the target atoms. The resulting collisions created other subatomic particles and high-energy radiation such as X-rays. The ability to create these high-energy collisions is the foundation of particle and nuclear physics.

Van de Graaff generators are described as “constant current” electrostatic devices.  In the case of the Van de Graaff generator, as you approach the output terminal (sphere) with a grounded object, the voltage will decrease, but the current will remain the same. Conversely, batteries are known as “constant voltage” devices because when you put a load on them, the voltage remains the same. A good example is your car battery. A fully charged car battery will produce about 12.75 volts. If you turn on your headlights and then check your battery voltage, you will see that it remains relatively unchanged (providing your battery is healthy). At the same time, the current will vary with the load. For example, your headlights may require 10 amps, but your windshield wipers may only require 4 amps. Regardless of which one you turn on, the voltage will remain the same.

The lineman demonstrated the coil but didn’t offer the kids a chance to try it for themselves.  When most had departed though, I approached and inquired if I couldn’t give it a go.  I was in for quite the shock!

If you are interested in exploring electricity in more depth in your homeschool, I encourage you to reach out to your local schools. It may be possible to visit a science lab at your local middle school or high school to experience a Van de Graaf generator first hand.  Many science centers also have them and even if not on public display, may be willing to organize a special class for a group of homeschoolers.  Alternatively, contact your local utility company as I did.  They may have special programs they can bring to your co-op.  You won’t know if you don’t ask.