We devoted much of today to touring some of the other top attractions in Oslo, namely the Museum of Natural History (University of Oslo) which included the Botanisk museum, Geologisk museum, and Zoologisk museum.  We spent much of the morning exploring at leisure the many exhibits on display here.  Located at Tøyen in the east of Oslo city centre, the garden is not only popular for recreation, but a scientific collection in itself.  It was the first time the munchkins had explored a natural history museum of this calibre so they had many questions … Are the animals real?  How did they do that?  What do they make the eyes with? 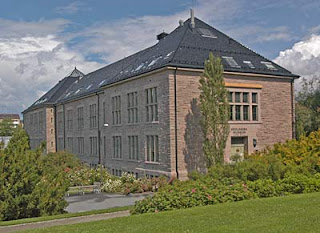 The Botanical Garden, founded in 1814, belongs to the Natural History Museum of the University of Oslo.  Through research, education, and conservation the garden seeks to increase public awareness of the importance of plant diversity and contains approximately 7500 species.  The greenhouses were built in 1868 and 1876;  the Palmehuset contains the Evolution Room, Mediterranean Room and Desert Room while the Victoriahuset was specially constructed for the giant waterlily of the Amazonas, and also contains many other tropical plants.  The munchkins and I were particularly intrigued by the Cacao tree (Theobroma cacao) … it was great to be able to show them where chocolate comes from … we were fascinated to learn that the flowers are borne directly on the trunk.

In the afternoon, we walked over to the Munch Museum.  Edvard Munch’s art is the most significant Norwegian contribution to the history of art, and he is the only Norwegian artist who has exercised a decisive influence on European art trends, above all as a pioneer of Expressionism in Germany and the Nordic countries.  When he died in January 1944, he had unconditionally bequeathed all his remaining works to the City of Oslo.  The Munch Museum opened in 1963 and was built to house this unique collection of approximately 1100 paintings, 4500 drawings and 18 000 prints. The selection is changed regularly but major works are always on display.

Inspired by a recent theft (and subsequent recovery) of Munch’s infamous Scream painting, we did a little letterboxing here … and were successful finding our first letterbox in Europe. We then made our way back to the city center where we enjoyed a delicious kebab dinner at Dennis Grill. 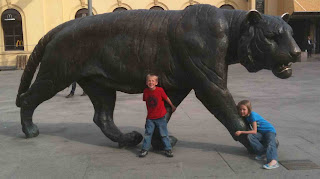 Oslo was once referred to as Tigerstaden (City of Tigers) by the author Bjørnstjerne Bjørnson around 1870. This name has over the years achieved an almost official status, to the extent the 1000 year jubilee was celebrated by a row of tiger sculptures around the City Hall. The only one known to still stand is found in front of the railway station. 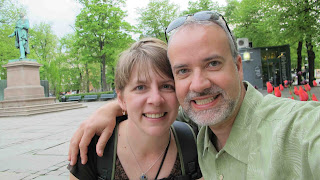 Thereafter, we had a few hours to spare before we departed by train to Trondheim.  We thereby did a little shopping.  In a magazine shop, we were scrutinized by the shopkeeper who I presume wasn’t fond of children.  She watched over them like an eagle and harped on them each time they leafed through a magazine of interest.  It was quite uncomfortable … I would’ve liked to just walk out … but I discovered a great children’s book here that chronicled much of our stay in Oslo, Karsten og Petra Hilser På Kongen.  I had to buy it!  As I write this now… I discover it is a series … I must find a retailer!