We recently began our history cycle a new, focusing once again on Ancient Times. As the kids have narrated stories about what we’ve read about the ancient Egyptians, my husband recalled fondly his visit as a child to the Rosicrucian Egyptian Museum.  I was thereby delighted when our visit to San Jose for the Piano Guys concert aligned with our history curriculum.

Egyptology is the study of ancient Egyptian history, language, religion, and art. At the Rosicrucian Egyptian Museum, kids can become Egyptologists as they explore the many exhibits, engage in the educational programing, and interact with the online resources. 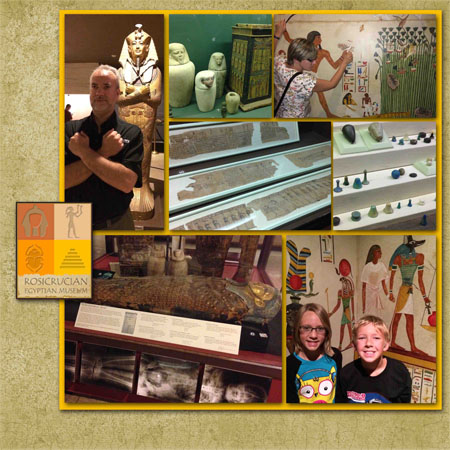 The museum houses the largest collection of Egyptian artifacts on exhibit in western North America — including objects from pre dynastic times through Egypt’s early Islamic era. There are more than 4,000 authentic ancient Egyptian artifacts in the museum’s collection. Several of the artifacts, however, are replicas and are labeled as such.

All total, there are four galleries and a replica tomb, architecturally inspired by the Temple of Amon at Karnak from the old kingdom. The kids particularly enjoyed our guided tour through this exhibit as they pretended to be real archeologists embarking on a new discovery.

The first gallery is the afterlife gallery with an impressive collection of mummies, coffins, and burial offerings. The four mummies on display are real. Mummies of animals are also on display.

The second gallery is filled with common household items that the Egyptians used. Most fascinating to me was the display on women’s cosmetics. The Kohl tube, hair accessories, mirrors, and perfume bottles tell us that the Egyptians were fastidious about their appearance.

Though they vaguely remember playing Senet when we studied ancient history during our first cycle, the kids enjoyed seeing the display of toys, including a wooden Senet board and an array of game pieces.

The third gallery has images of kingship and the gods. The ancient Egyptians worshipped hundreds, if not thousands of gods and goddesses. In addition to the many familiar names, such as Isis and Osiris, small towns had their own patron deities.

The fourth and fifth galleries are dedicated to the pharaoh Akhenaten and the goddess Sekhmet.

The Rosicrucian Egyptian Museum’s future looks promising. New exhibits, tours, and workshops are planned along with continued research and scholarship.