The Dean Creek Elk Viewing Area and the O.H. Hinsdale Interpretive Center are popular tourist stops along Hwy. 38 near Reedsport. Here, visitors are able to observe up-close views of Roosevelt Elk, with the herd sometimes reaching as many as 120 elk. This area of mountains, meadows, and marshes also are home to beaver, coyote, muskrat, mallards, Canada geese, and great blue heron. 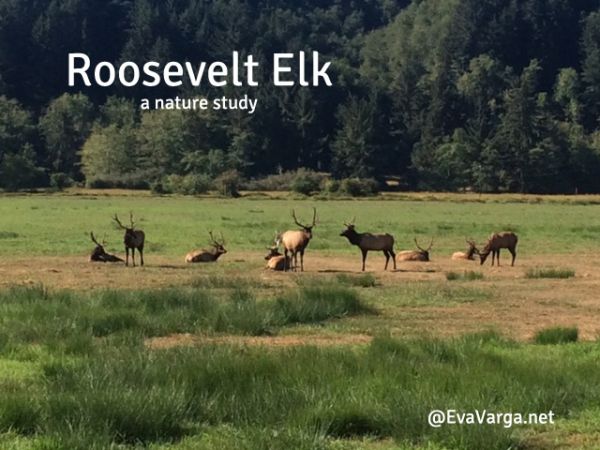 The Roosevelt Elk are native to the area and are considered Oregon’s largest land animal. Inhabiting forests and meadows from northern California to British Columbia, they are the largest of six sub-species of elk. They generally live between 10 to 15 years, but some may live more than 20 years.

In this short video by Chris Cru, you can observe the Roosevelt Elk peacefully grazing as well as a coyote running in the background.


The antlers of a Roosevelt elk can reach spreads of nearly 3 feet and are thicker than the antlers of the Rocky Mountain elk. Older, stronger bulls have larger antlers, with 6 or more points per side, while yearling bulls have single spikes.

Their brown-gray winter coat will turn to a glossy, reddish-bay color in the summer. A tawny rump patch is outlined in black and they boast a thicker mane. At birth, calves are spotted and more tawny in color. As mature elk age, their coats will lighten in color. 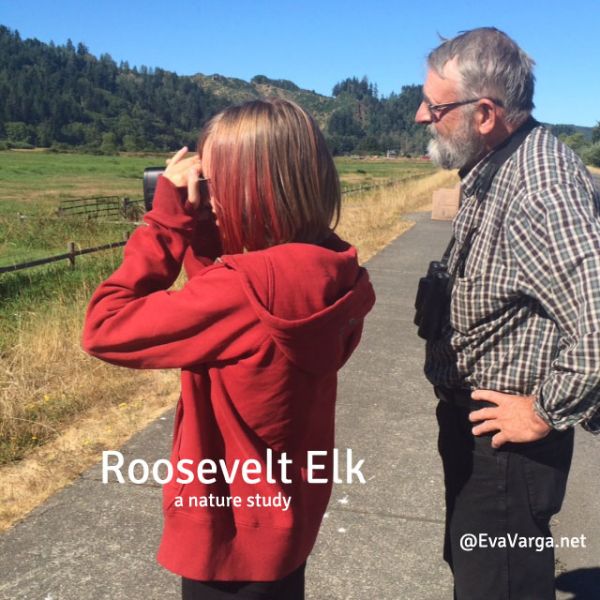 Using a range finder to calculate our distance apart

Nature predators include mountain lion and black bear which primarily feed on new calves and sick animals. When approached or threatened, both cows and bulls will use their sharp front hooves for protection. Cows will bark an alarm that sounds like a high-pitched neigh while calves will bleat when danger approaches.

In late summer, bulls shed their velvet by rubbing antlers against tree limbs and bushes until the new antlers are hardened and shiny. This helps the males win over the female when the mating season begins in autumn. 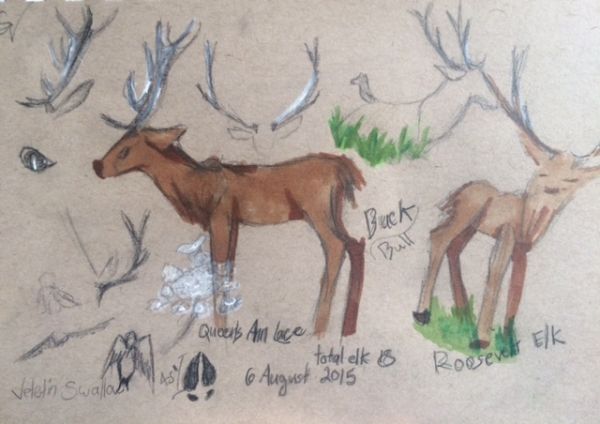 The elk bulls bugle during the fall season. This is a great time to see the males in action. The bull elk’s deep, resonating bugle can be heard across the meadow as the males call to attract a female, move in to spar with a competitor, and take control of the harem.

To signal their status and fitness, the bulls will wallow in mud and spray themselves with urine. They will also tangle plants in their antlers to appear more imposing and better emphasize their size and power. 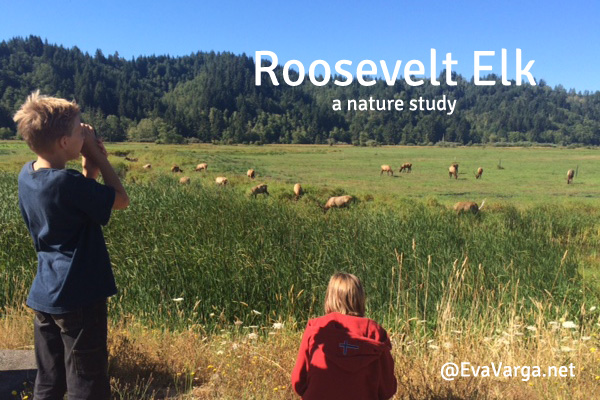 When the rut season is over, the females will force the males out of the heard once again. He will generally join up with a small group of other males though occasionally he’ll remain solitary. They then focus on grazing to gain nourishment fro the oncoming winter months.

The bulls drop their antlers in the later winter which become an important source of calcium for smaller forest mammals including coyotes, squirrels, and mice.

We’ve always enjoyed taking part in the monthly challenges at Handbook of Nature Study. This month our selected challenge was to Sketch Outdoors.