This year, the Shakespeare play that we selected to study was Romeo & Juliet, arguably his most well known tragedy.  Written early in his career, the play is about two star-crossed lovers whose deaths ultimately unite their feuding families.  Alas … young, teenage love. 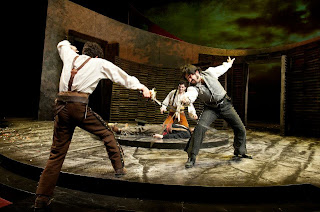 To prepare for the production we first watched Gnomeo and Juliet  – a silly version indeed, but it was a good introduction.  We then read Bruce Coville’s Romeo and Juliet and did a few copy work exercises.  More recently, we enjoyed the BBC animated production of Romeo & Juliet and thereafter studied some of the vocabulary:  enmity, kinsmen, rancor, anon, haste, banished, churl, haply, and scourge, to name just a few. 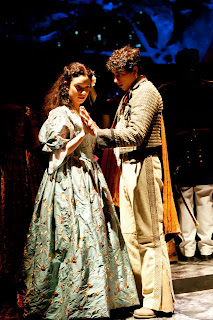 My husband and I have seen this play a few years ago at the Oregon Shakespeare Festival.  The director then stated that because Romeo & Juliet was a play of contrasts.  He chose to highlight the contrasts.  The most evident way he accomplished this was in his choice of costuming.  The  older generation – the parents and their employed – wore Elizabethan costumes whereas the young generation – the young lovers and their friends – wore modern day apparel including school team uniforms.  He further emphasized the contrasts with their speech – taking liberty with the prose originally penned by Shakespeare for the youth. 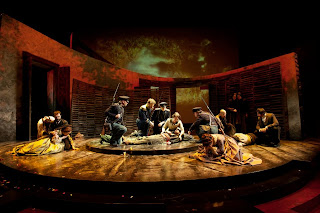 I was particularly intrigued to hear that this year, the play has been set in the 1840s Alta California just prior the Mexican-American War.  As we are newly residents of California, the state history – the missions, the gold rush, and the battle for statehood, etc. is an ever-present part of our curriculum as we visit state parks and monuments in our regular travels. 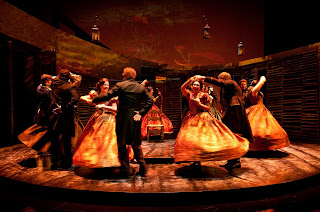 Northern California in the mid-17th century was a vibrant and conflicted time in our history.  Romeo and Juliet – the son and daughter of two landed families (one Mexican & the other Spanish) locked in an old feud, are irresistibly drawn to each other.  Defying the hatred and distrust surrounding them, they dare to believe they can, and must, be together.

The director’s vision was fantastic … the costuming, the stage, the casting … everything was wonderful. I’ve been attending OSF performances every year for the past 7 years and this one is certainly my favorite.

The kids enjoyed the production as well, though Buddy was squirrely through the monologues, the fight scenes had his eyes glued to the stage.  He even asked to see the program a few times and matched photographs to the live action.

One thing we did different this year that we’ll be certain to do prior to every production hence forth, is attend the prologue.  It was very informative and helped to bring to attention some themes and things I hadn’t thought to discuss with the children beforehand.

[Admin Note:  All photos are from the Oregon Shakespeare Festival website.]