On Monday, we visited our local grocer … a locally owned IGA store called CE Lovejoy’s.  Lovejoy’s is locally-owned and operated. The full-service market offers high-quality fresh produce, a complete meat department, freshly baked goods, local dairy products, and specialty cheeses, a full-service gourmet deli, and a wide selection of assorted beers and wines.  They opened about a year ago and quickly became our favorite store for all our grocery needs. Co-owner and General Manager Troy Wolfe met us upon our arrival with a warm greeting.  He then immediately led us to the produce department where we were introduced to Diana.  She described how they purchase their produce as members of an IGA, Independent Grocers Alliance.  IGAs bring together independent grocers across the United States to ensure that the trusted, family-owned local grocery store remained strong in the face of growing chain competition.  Surprisingly, we were also given samples of the delicious strawberries. We asked a few questions, primarily regarding organics, and learned that bananas are the biggest selling item in the department. 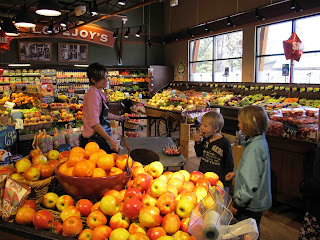 We then went to the back room where we were showed the receiving area for deliveries.  The kids were most intrigued by the cardboard compactor, however.  We watched it squash numerous boxes under 2 minutes and they all wanted to give it a try .. “Uhm, no. Let’s move along.”  😉 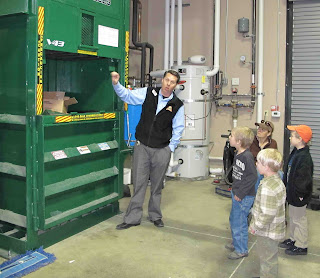 We then meandered to the meat and seafood department where we met Luke, the department manager.  We were particularly amused to learn that Luke, as well as Diana in Produce, were former employees at Safeway when Troy worked there.  “Safeway lost their best employees,” he remarked.  As a former Safeway employee myself when I was in high school, I couldn’t help but smile.  It is a long story, but I must admit, my husband and I met working at Safeway … I can credit them with that. 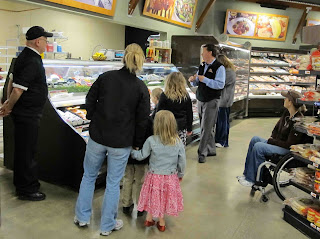 We were given a tour behind the scenes … allowing us to walk into the freezer and refrigerator.  We learned that the biggest selling item in the meat department was ground beef and in the grocery department it was milk.  It was a delight to see how the dairy shelves are stocked directly from the refrigerated storage area.  The kids got a kick out of being able to say hello to their moms through the sliding doors.  We were also happy to learn that the strongest selling dairy products was Eberhard’s.  Yay for the local cow!! 🙂 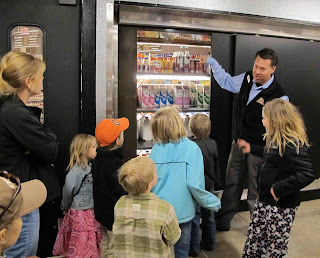 The last department we visited was the Deli/Bakery where we were met by Kris.  [ MeiLi and Kris are both students of Taekwondo together, though with the new store, we haven’t seen Kris or her son much lately.  We miss you both! ]  Kris shared with us how the signature items are made here in house.  The kids were impressed with the speedy washing machine and some wished aloud they had one like that so they wouldn’t have to wash dishes.  We also learned that the best selling item in the department was their signature garlic parmesan bread ring. 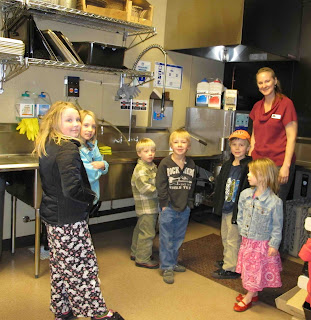 Kris is a great cook and to assure that CE Lovejoy’s stands out from its competitors, she offers occasional cooking classes at the store.  Some past events have also included wine tastings, local brewery tastings, health fair, a BBQ, and live music!  We ♥ Lovejoy’s!