Each year, the local Sheriff’s Association sponsors a Cultural Faire at the mall.  The Sons of Norway takes part each year … and we were delighted to participate. There were numerous cultural groups represented with booths around the mall … each staffed by volunteers to share with the public a little about what they do.  A stage in the center of the mall was the highlight for volunteers and visitors alike.  There were dancers, singers, and performers all day. 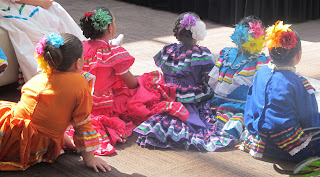 There were many groups of children dressed in their national dress.  Several groups showcased folk dancing.  I was very impressed with the diversity of the area and was also inspired to incorporate folk dance as a part of our Barnesklubb.  I would really like to have a group of youth dancers on stage next year. 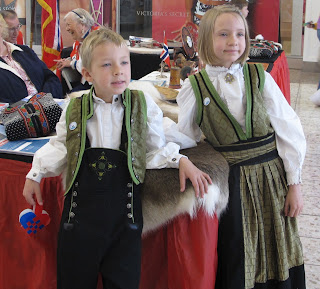 The kiddos dressed up in their Norwegian festdrakt bunads and helped to staff the lodge booth.  They taught a few people how to weave Scandinavian heart baskets.  However, we were surprised at how little the people interacted with the booths.  The big draw of course was the entertainment on the stage.  I’ll have to think of a way to help encourage the public to engage more with the booths … perhaps a scavenger hunt or passport to enter a drawing. 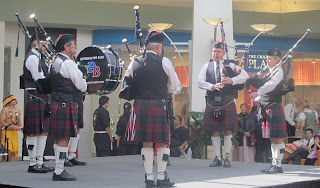 One of the most popular entertainers were the Scottish Bagpipes.  They played on stage for about 15 minutes and then led many of the groups around the mall in a parade.  Just behind the bagpipes were American veterans carrying the United States flag and thereafter a volunteer from each group carried a flag for their ancestral country.  We walked around the mall twice and then ended in the center whereby the veterans led us in the National Anthem.  I thought the parade was very well done. 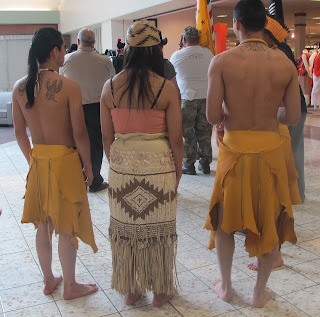 There were two distinctly different Native American groups at the event.  The above photo (taken during the parade – so sadly I don’t have a better picture) is of a local Wintu tribe.  I was fascinated with the woman’s skirt, the design was done entirely in seashells and it swayed and jingled as she walked.  The group below is not local … but I believe a group that travels to different venues like this one to educate the public about their culture.  I wish I had caught their name and the region they represented.  They reminded me of the Warm Springs tribe but I’m not certain. 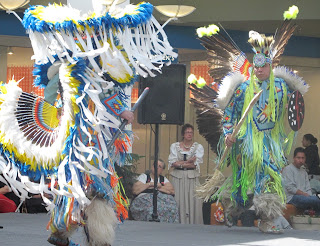