Chimps, Inc. is a nonprofit wildlife sanctuary dedicated to furthering chimpanzee conservation through education. It was founded by Lesley Day in 1995 in response to the multitude of captive chimpanzees desperately in need of homes. Earlier this week, Nicole Wilkins, a staff member at Chimps, Inc. came to talk to us about the work they do at the sanctuary and to give us a glimpse into the lives of the chimpanzees. 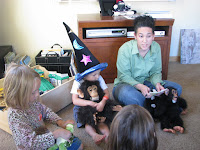 It was a very informative and educational talk. The biggest thing the kids learned was how to tell the difference between a monkey and an ape. “Monkeys have tails. Apes don’t.” At the conclusion of the talk, we presented Nicole with a donation. Each family collected a variety of things from Chimps, Inc.’s wish list. Some items included tea bags, blankets, plastic containers, plush animals, magazines, and coloring books. In January, we also hope to make another donation of enrichment toys and gifts for the chimpanzees. 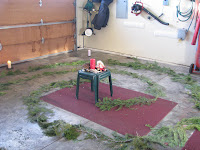 After the Chimps, Inc. talk, we enjoyed learning about Winter Solstice. The children each walked the spiral as they reflected upon the past year. We set up the spiral in our garage because temperatures were hovering around 3 degrees all day and the kids voted to do it indoors. When they reached the center, they were assisted in lighting their candle. They then walked out of the spiral as they thought forward to the new year. My kiddos were particularly fond of the spiral as we had recently read a book about labyrinths and mazes titled, Mazes Around the World by Mary D. Lankford. This activity was the perfect way to tie-in literature, nature, and history/heritage. 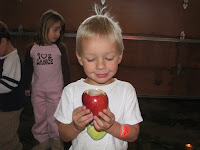 The winter solstice occurs at the instant when the Sun’s position in the sky is at its greatest angular distance on the other side of the equatorial plane from the observer. Depending on the shift of the calendar, the event of the winter solstice occurs some time between December 20 and December 23 each year in the northern hemisphere, during the shortest day of the year. 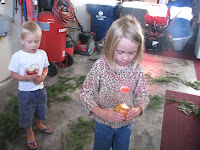 The seasonal significance of the winter solstice is in the reversal of the gradually lengthening nights and shortening days. How cultures define this is varied, since it is sometimes said to astronomically mark either the beginning or middle of a hemisphere’s winter. Worldwide, interpretation of the event has varied from culture to culture, but most cultures have held a recognition of rebirth, involving holidays, festivals, gatherings, rituals or other celebrations around that time.

A huge thank you to Bonnie for planning, coordinating and setting up our spiral for the celebration.