A teachable moment came to me yesterday afternoon as my kiddos were outside playing with the neighborhood kids.  Somehow, in their play … one of the girls said the word “Non-fiction” and surprisingly, my daughter wasn’t familiar with the term.  She asked them what it meant and they thought it bizarre that she didn’t understand.  This brought about a discussion amongst them of what they learn in school as opposed to homeschool.  I could overhear a portion of their conversation as MeiLi and her best friend were seated on the grass just outside my open window.

“Do you know what fractions are?” her friend asked.

“Do you know how to multiply?“

“Yes! I can even multiply and divide fractions.  I am very good at math.” MeiLi retorted. 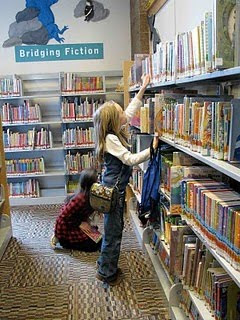 Her friend then proceeded to try to explain the difference between fiction and non-fiction.  “Well.  Non-fiction is like biographies. Have you read a biography?”  Again, MeiLi was perplexed.  She wasn’t sure what that meant either.

I wasn’t present for this conversation but MeiLi shared an account from her perspective later on.  I explained what the terms meant and gave examples from our studies.  “Oh!  I know what those are!”  As we continued to talk, I got to thinking … in school, the class is given a tour of the library every year … they are shown how to use the catalog and informed of the different literary genres.  Now I know that I have covered these things in our frequent trips to the library but I thought perhaps this would be a great field trip.

I thought it would be a fun way to kick off the new school year so I thereby contacted one of our children’s librarians and have set up a date / time for early September. I invited several of our homeschool friends and one – our piano instructor – has even agreed to play a few songs after our guided tour (she also does a free children’s music program there for toddlers).