With the growth of social media, blogging, and the popularity of Pinterest, I frequently see science activities and lessons that parents, home educators, and teachers have pinned. While I love that social bookmarking sites have made science more accessible, I am frustrated with the cookbook approach and the growing misconceptions about what is science. 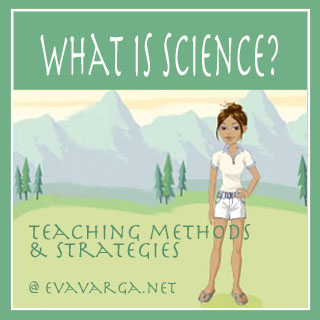 Over the next few weeks, I will be sharing with you a series of posts that address the scientific method, science process skills, and science as inquiry.  Along the way, I will address several key misconceptions about science.  I look forward to engaging you in a dialogue – I hope you will join in on the discussion.

For example, an ecologist observing the territorial behaviors of bluebirds and a geologist examining the distribution of fossils in an outcrop are scientists making observations in order to find patterns in natural phenomena. An astrophysicist photographing distant galaxies and a climatologist sifting data from weather balloons similarly are scientists making observations, but in private settings.

The above mentioned examples are observational science, but there is also experimental science. A chemist observing the rates of one chemical reaction at a variety of temperatures and a nuclear physicist recording the results of bombardment of a particular kind of matter with neutrons are scientists performing experiments to see what consistent patterns emerge. A biologist observing the reaction of a particular tissue to various stimulants is likewise experimenting to find patterns of behavior.

Science is an exciting and dynamic process of discovery.  The chart illustrated above was developed by the University of California and the UC Museum of Paleontology, with funding by the National Science Foundation. The flowchart represents the process of scientific inquiry, through which we build our knowledge and understanding of the natural world. Most ideas take a serpentine path through the process, winding through process as shaped by unique people and events.

There are many routes into the process – like making a surprising observation in nature.

Testing ideas – in the field or in a lab setting – is at the heart of science.

Science relies on a community – within research groups and across all science disciplines.

Science is intertwined with society and it affects our lives every day.

Next week, I will explore in more detail the concept of scientific inquiry; addressing the misconception that there is a single scientific method that all scientists must follow.

Additional posts in this series include:

1 comment on “What is Science? – The Process of Discovery”