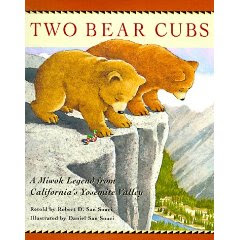 While vacationing recently in Yosemite National Park, we came across a wonderful children’s book, Two Bear Cubs by Robert D. San Souci. It is a delightfully illustrated retelling of a Miwok legend of two adventurous bear cubs and how the huge granite rock formation at Yosemite known as El Capitan comes to be.

When Mother Grizzly goes searching for the cubs, all the animals she encounters try to help her. Red-tailed Hawk finally spots the cubs on top of the mountain, but it isn’t until the most insignificant of creatures, the measuring worm (Lepidopteran family Geometriidae) tries to make the climb that the cubs are rescued.

The author’s note explains that the Miwok people believe their early ancestors had animal forms which helps to explain why the animal characters are shown dressed in traditional Miwok clothing. Additional background notes on the Miwok and the story of the small, triumphant worm assured me that this was one I wanted to add to my collection.