The Secret of the Kells has recently been released on DVD and we were fortunate to receive it from Netflix just last week.  The movie gives viewers a glimpse into the world of illuminated books, particularly the infamous Book of Kells.  The Book of Kells (sometimes known as the Book of Columba) is an illuminated manuscript Gospel book in Latin, containing the four Gospels of the New Testament together with various prefatory texts and tables. It was created by Celtic monks ca. 800 or slightly earlier.  Though it didn’t quite fit the time line for our history studies (we are presently in the 1500s), we were able to cover a topic that Story of the World had not included in its narrative. 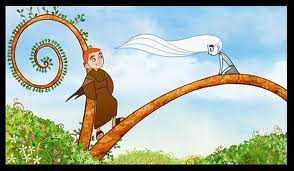 The story has to do with a young boy named Brendan (voiced by Evan McGuire) living in Ireland during the Middle Ages, a time of mystical superstitions and ‘barbarian threats from the north’.  When Brendan’s village is visited by a master book illuminator who carries with him a mysterious, unfinished book, the 12-year old vows to help him complete the book, a promise that involves the boy’s venturing into a forbidding forest outside the village wall and meeting beguiling sprite prone to shape-shifting into a white wolf.

The artistry of the film is delightful … reminding us a little of our favorite Japanese manga artist and prominent film director and animator, Hayao Miyazaki.  It was wonderful story and my kiddos didn’t even realize that the ‘barbarians from the north’ were actually Vikings.