Langston Hughes was a great American. Few have ever illuminated our nation as honestly and accurately as he. His recognition of its ugliness is always tempered with love for it.  I first discovered Hughes as an undergrad at Lane Community College. My writing professor introduced me to the literary world in ways I had not anticipated.  It was here that I first experienced the world through the eyes of the minority.  It was here that I discovered Black American Literature. 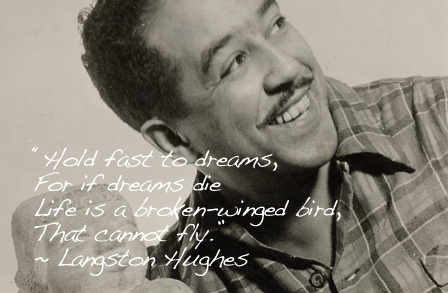 by Robert Burleigh, a non-fiction narrative, describing the early life of Langston Hughes, and how he became inspired to write poetry. It was a joy to read; Leonard Jenkins’ jazz-like artwork blends well with Robert Burleigh’s text, both integrating with the style of Hughes himself.

The Negro Speaks of Rivers

I’ve known rivers ancient as the world and older than the flow of human blood in human veins.

I bathed in the Euphrates when dawns were young.

I built my hut near the Congo and it lulled me to sleep.

I looked upon the Nile and raised the pyramids above it.

I heard the singing of the Mississippi when Abe Lincoln went down to New Orleans, and I’ve see its muddy bosom turn all golden in the sunset.

James Langston Hughes was born February 1, 1902, in Joplin, Missouri. His parents divorced when he was a young child, and his father moved to Mexico. He was raised by his grandmother until he was thirteen, when he moved to Lincoln, Illinois, to live with his mother and her husband, before the family eventually settled in Cleveland, Ohio. It was in Lincoln that Hughes began writing poetry. After graduating from high school, he spent a year in Mexico.  On the train to Mexico, he was inspired to write the poem “The Negro Speaks of Rivers” shown above.   You can listen to Hughes speak of this moment here, voice of Langston Hughes.

Throughout the month, I sprinkled in other poems Langston Hughes wrote.  Many of which are found in the series Poetry for Young People: Langston Hughes

.  The kids enjoyed his work and reveled in the power of his words.  They were even inspired to pen their own poem:

Through Mine Eyes, is a multicultural literature unit that will span the globe and address a variety of topics.  Each month, I will be selecting a different culture, time period, genre, or style of literature with which to view the world. In January, our focus is Black American Literature. Join me again in two weeks when I share the other authors we enjoyed this month. If you are also exploring the world Through Mine Eyes,  I will also include the link to share your posts. We’d love to hear about the books you have enjoyed. 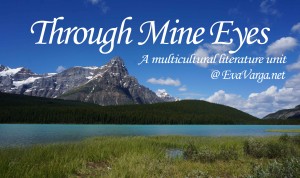