My parents were in many ways great role models. In addition to hard work, my parents instilled within me the drive to seek out creative ways to earn money.

When I was a little girl, my two younger brothers and I would periodically set up a lemonade and craft booth in front of our house. We lived in a small coastal community and our home was on a main street through town. The majority of our customers were tourists and I remember fondly, when one group of young cyclists offered to pay us with Canadian money – we were overjoyed! Their money was so different from our own!

We never made a lot of money but it was a fun way to pass the leisurely hours of the summer. The money we did earn we split evenly between the three of us and generally spent it on candy at Wilson’s Market up the hill.

Last week I spoke about how teens can earn commissions doing work around the house. Today, I wanted to share with you ideas for developing entrepreneurs.

You’re never too young to develop your talents and, in turn, make money from your skills. ~ Dave Ramsey 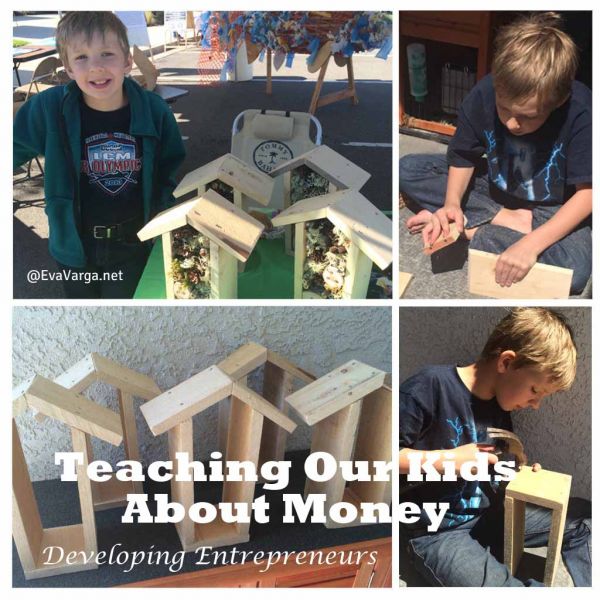 At a local Earth Day fair earlier this year, the kids set up a booth to share with the community the efforts we had undertaken as part of our Roots & Shoots club. In addition to showcasing the projects we had undertaken (primarily our Bottle Cap Mural still underway), each of the kids developed a product that demonstrated their knowledge of and passion for the environment.

The previous year, our club had created Insect Hotels. Jeffrey shared that he had really enjoyed this project and wanted to make a difference for pollinators like the Mason Bee. He thereby reached out to his papa one weekend when we were visiting to procure the wood he would need to make a half dozen nesting boxes. He brought the cut pieces home and began to construct the boxes. He sanded down the rough edges, nailed the pieces together, and finally filled the interior space with nesting material.

Geneva had borrowed a book from the library some time ago, Terrarium Craft, and was intrigued with both the simplicity and beauty. When we began to plan our booth space for the Earth Day fair, she expressed interest in creating terrariums similar to those she had enjoyed in the book. She thereafter ordered a variety of air plants and a half dozen glass terrariums from wholesale vendors online. 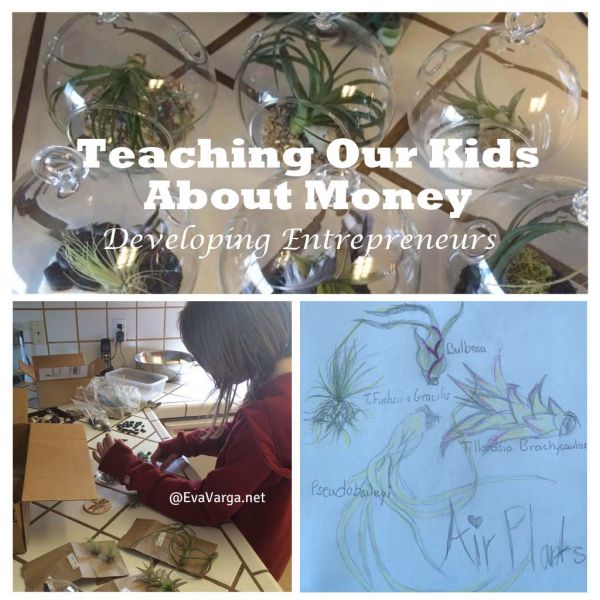 As an extension of our nature studies, Geneva created several beautiful glass terrariums and was also very successful selling these at the Earth Day festival.

There are thousands of ways to make money doing something you love. As we listened to the book Smart Money Smart Kids

by Dave Ramsey and his daughter Rachel Cruze in August, we spent time brainstorming more ideas for each of our kids – ideas that they were both capable of doing and that were of interest to them. Here’s just a few of the services and products that they came up with:

Many of their ideas require very little startup costs. I am particularly impressed with their creativity. Regardless of what avenue they choose, I encouraged them to use a notebook to keep track of their progress.

and our family brainstorm in early August, Geneva has grabbed onto an idea and has shown remarkable resolve. She won’t allow me to reveal what she is working on but I can share a few of the steps she has taken in pursuit of her new passion.

She set up a binder to keep track of everything including the name and the graphics she has created for her business, a list of products she plans to offer, market research she has done (comparable prices, etc.), materials needed, and of course, expenses.

As part of her market research, she created a survey using Google Docs and spent a morning at a local farmer’s market to poll the community. While she wasn’t able to use an electronic device as planned (no wifi), she sat down later and entered all their responses by hand into the document to create a spreadsheet of her results. As an introvert, I was very impressed that she followed through. I can’t wait to see how far she takes her project!

We all need to feel needed and to know that we’re making a contribution — even kids. “But they can’t feel that way if they don’t have chores and make contributions to the family,” states parenting experts Foster Cline and Jim Fay.

We’ve followed the Love & Logic philosophy since the kids were toddlers. While we haven’t always been consistent in all disciplines, the one strategy that really struck a cord with us was in regards to chores. 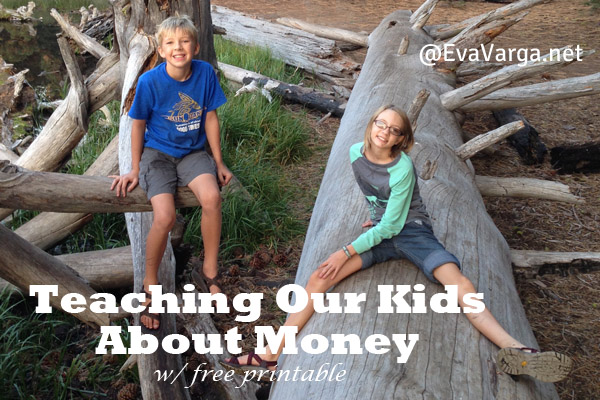 There is so much power to an effective chores system. Even the words you use to discuss chores with your child impacts how she perceives the activity and experiences the “lesson”. So, for example, Love & Logic suggests referring to daily “chores” like making the bed, picking up your room, and helping to set the table as “contributions”.

Contributions are part of being a family, of being valued and needed, and working together to make a household function well. The approach, a simple change in language, considers the family unit and the home in a way that is sure to cultivate a respect and responsibility for these things over the long term.

Chores are something everyone in the family does to contribute to the family.  They are part of being needed and valued by the family.  Chores teach responsibility.

Since they were toddlers, the kids have contributed to the needs of the family. We all do our part to help things run smoothly. Here is a list of their daily responsibilities:

• Keeping up with their schoolwork and completing the assigned tasks each week
• Pet care (daily feeding and cleaning of cages)
• Making their bed and keeping their room orderly / picked up
• Putting their school materials & swim gear put away properly
• Cleaning up after themselves (putting their art materials away when finished with them, for example)
• Helping to carry in groceries and put them away properly
• Clearing their setting and cleaning up after meals
• Keeping their bathroom tidy
• Personal care daily

Their failure to follow through may forfeit their earnings that week. This is not to say there are not roadblocks and pot-holes along the way, but we strive to make improvements individually and as a family. 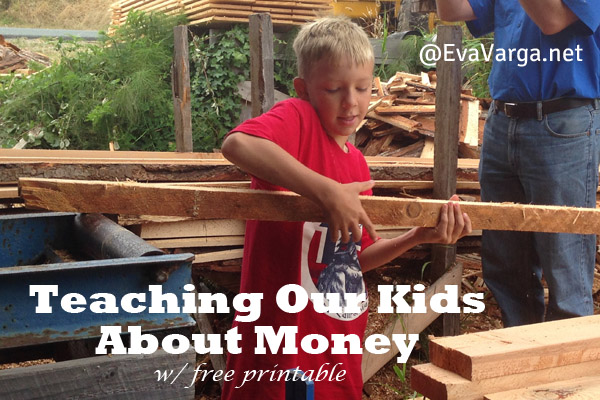 Guiding your children in the choices they make with money is HUGE! The lessons you teach them as they earn money and learn to spend, save and give will lay an influential foundation for their lives. ~ Dave Ramsey

You can begin to teach kids about money as young as pre-school age; here are 9 Ways to Teach Your Kids About Money. Just think about it: if your kids can grasp this money stuff early on, they’ll avoid many of the pitfalls later. 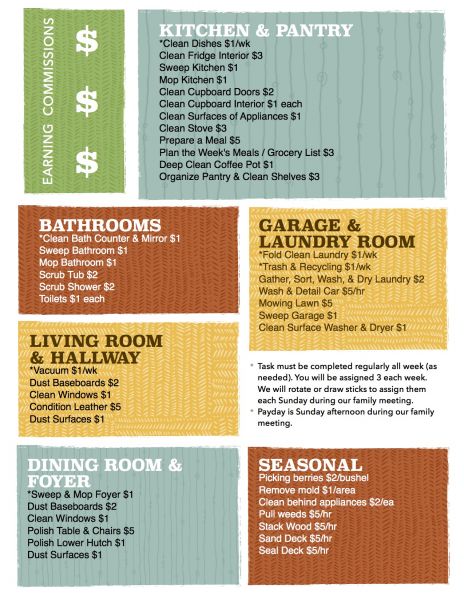 In addition to their contributions or responsibilities to the family, our kids have many opportunities to earn commissions. As they have gotten older, the jobs have increased in time input and difficulty (and thereby also pay a larger commission).

In the infographic above, you can see the variety of ways in which our kids can earn commissions. Pay has been negotiated over the years and is related to the time in which it takes to complete the job. The jobs with an asterisk are required. As such, three of these jobs are assigned to each child every week. The other jobs are optional.

We certainly are not confined by this list. Additional jobs and opportunities arise throughout the course of the year. The kids have even worked on commission for their grandparents undertaking a variety of tasks. Friends of ours have farm animals and responsibilities associated with life on a farm.

How about you? In what ways have your children earned spending money?

Join me next week as I share with you creative ways kids can boost their earning power with entrepreneurial efforts.