Engineering has always been of interest to my daughter. She has enjoyed building toothpick bridges, marveling at skyscrapers when we have traveled to major urban areas, and writing letters to civil engineers to learn more about their work.

Earlier this year, I shared with you an STEM Club activity I put together that focused on the Newspaper Towers & Skyscrapers. My daughter enjoyed this activity so much that she expanded upon it for a homeschool science fair.

One of the tallest buildings in the world is the Shanghai World Financial Center, located in the Pudong district of Shanghai. At the time of its completion in 2008, its 492.0 meters (1,614.2 ft) made it the second-tallest building in the world and the tallest structure in mainland China. The observation deck offers views from 474 m (1,555 ft) above ground level and we had the opportunity to experience this earlier this year. 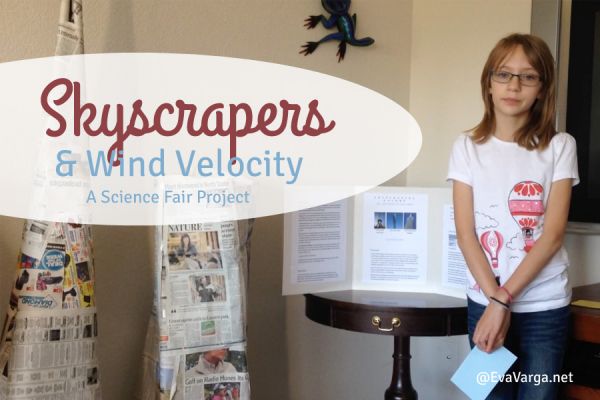 In April, she took part in the CurrClick Earth Day Science Fair and it was of no surprise when she expressed interest in doing something with skyscrapers. I tried to dissuade her, knowing it would be difficult to design a fair test that resulted in measurable results. Despite the mis-givings of her tutor and I, she was not deterred.

She researched numerous skyscrapers around the world and ultimately settled upon three for her design inspiration: the Empire State Building in New York City, the Cayan Tower in the United Arab Emirates, and the Trans America Building in San Francisco.  Each design was significantly different and through her research, she came up with her experimental question: How Does the Design of a Building Affect the Sway Under Different Wind Velocities?

She calculated a scale with which to build each model (1/4″ = 1 m). Using three identical boxes as a stable ground upon which to build, she constructed her skyscrapers with rolls of newspaper and wooden skewers as the frame. She then wrapped newspaper around the frame and secured it with tape.

The Cayan tower proved to be the most difficult to build for its design required it to rotate 90 degrees. Despite considerable effort, we could only get our paper model to rotate about 35-40 degrees.

To test the sway, she used a large fan to generate wind at different velocities, being careful to keep the distance and the aim consistent. To measure the wind speed, she used a Kestrel wind meter

She discovered right away that the sway of each building was so small that it was not possible to measure consistently.  She thereby changed focus and began to take wind speed measurements at different places next to each building, comparing how the wind velocity was altered due to the design of the building.

I was very impressed with her tenacity to see this project through, despite numerous setbacks and disappointments. She persevered and despite not getting an outcome for which she had hoped, she learned how to set a goal, plan a significant project on her own, how to gather scientific data, and the process by which to present it to others.

Many parents will contend that science fair projects are more of a headache than they are worth.  Join me next week when I share tips for coaching your student through the process without losing your hair.

If you are interested in coordinating a science fair for your homeschool community, I encourage you to read my earlier post, Planning a Fun Science Fair in 10 Easy Steps. 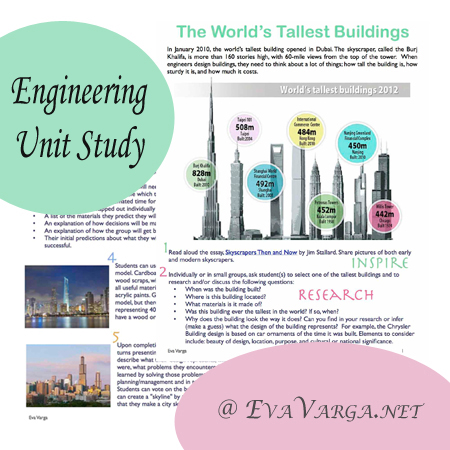 To learn more about skyscrapers and to explore the field of engineering with you students, check out my Engineering Unit Study: World’s Tallest Buildings.

Engineering is one of the fastest growing industries in the world!  My children have always had an interest in engineering fields.  I thereby put together a unit study to provide them with hands-on engineering experiences.

I am delighted to share these activities with you so that you may teach engineering concepts to your children and build on their natural curiosity through hands-on learning. 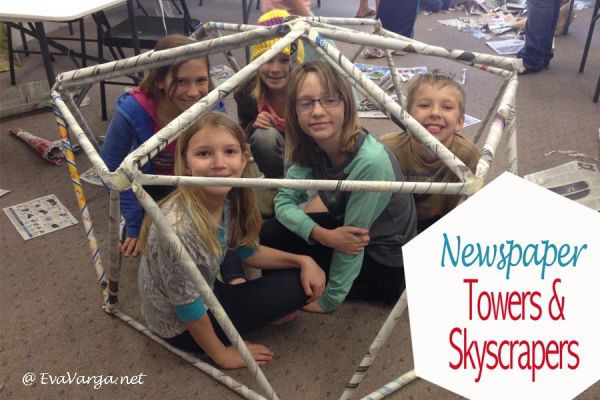 Throughout the unit, I shared with the class examples of skyscrapers and engineering marvels around the world.  Students were asked to create graphs and to research a skyscraper of their choice to present to the class.

One of the lessons in the unit involves building structures with rolls of newspaper.  In a friendly competition, students worked individually or in pairs to construct the tallest structure possible using only newspaper and masking tape.

Teams then worked collaboratively to build a structure large enough so they could climb inside. The kids absolutely loved this activity and proclaimed it one of their favorite. 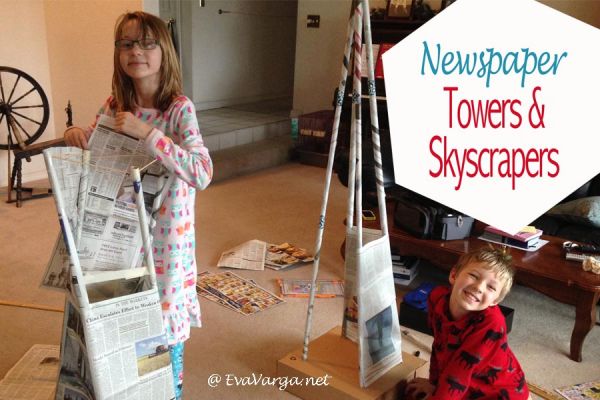 To culminate the unit study, the class was then given the challenge of building a skyscraper that is capable of withstanding a windstorm.  My kiddos opted to utilize the same building techniques they had explored earlier: rolled newspaper tubes.

Sweetie took the assignment a step farther and employed her brother to help build several skyscrapers, each a scaled model of a real-life skyscraper.  In the photograph above, you can see the Cayan Tower in Dubai and the Trans-America Building in San Francisco under construction.

She plans to use each model in a science inquiry project for Curr-Click and our local homeschool science fair in May. You can read more about her project here, Skyscrapers and Wind Velocity.

The World’s Tallest Buildings is a unit study designed for upper elementary and middle school students that will undoubtedly spark an interest in engineering and design. The projects and activities outlined can be modified for small groups or with individual students. The unit is available for purchase in my store for just $2.95 –  Engineering Marvels: The World’s Tallest Buildings

Zǎochenhǎo (早晨好) !  I’m delighted you are following along with us as we tour China, city by city.  We recently returned from a three-week family holiday in China. Today’s post on Hong Kong is the final post in the series whereby I introduce you to the culture of China through our eyes. 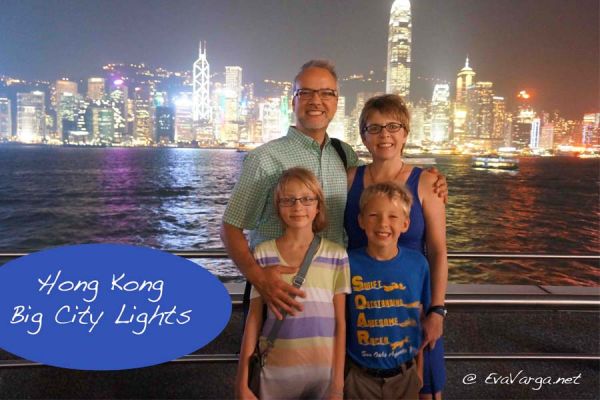 Hong Kong, officially named Hong Kong Special Administrative Region of the People’s Republic of China, is a city that’s full of surprises. Hong Kong is much more than skyscrapers, teeming shopping streets and Jackie Chan. Forty percent of the land is devoted to natural habitats – sandy beaches, woodlands and mountains. Hong Kong is a water city with different islands to explore, and kids will have fun taking ferries everywhere.

The green and white Star Ferry has been in operation for over a hundred years, chugging back and forth between Kowloon and Hong Kong Island. The trip doesn’t take long, but you get a great view of the harbor, junks, hydrofoils, sampans, and barges. You can also pick up a ferry to go to Lantau, Lamma or Cheung Chau Islands.

The night view along the beaches of Victoria Harbor is a famous attraction. Hong Kong Island and Kowloon Peninsula are full of high-rise buildings so at night, the lights blaze so magnificently and so beautifully around the harbor.

We took the ferry over to Kowloon to enjoy the Symphony of Lights show in the evening.  The largest permanent light show in the world, the 15 minute show is performed by the towers of Central District, Hong Kong. It is presented by the tourism commission through organizing 44 skyscrapers and landmarks that lie on the sides of the Victoria Harbor. Through interactive lighting and music show, it shows the vibrancy and glamorous night view of the city.

If you enjoy unusual attractions or engineering feats of wonder, you will enjoy the Central-Mid-Levels escalator and walkway system – the longest outdoor covered escalator system in the world. The entire system covers over 800 meters in distance and elevates over 135 meters from bottom to top.

There you can take the Peak Tram up to Victoria Peak. Once at the top, if it’s a clear day, you’ll have a spectacular view of Hong Kong. It was a little cloudy when we visited but the view was still stunning.

As it was Sweetie’s birthday and our trip had also come to a close, we wanted a relaxing day – she wanted the beach.  We asked the staff at the hotel and learned there are good swimming beaches at Repulse Bay and Stanley, staffed with lifeguards in summer. 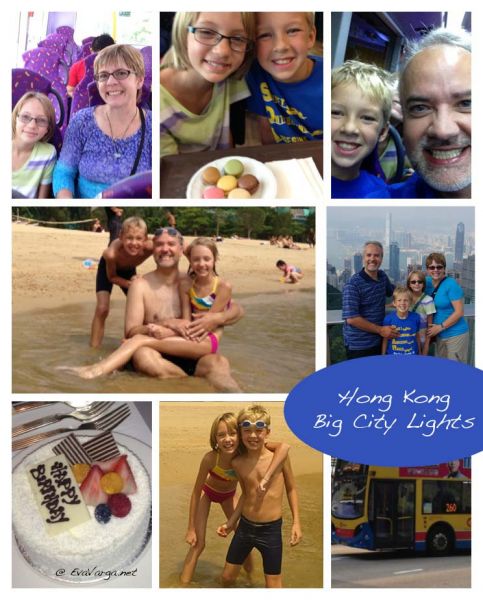 We thereby boarded bus 260 – a double decker for a scenic ride to the other side of the island – with spectacular views of the bays and mountains.  We stopped at Stanley first as it was the farthest away and we planned to work our way back to the hotel.  We did a little shopping at the nearby markets and then took a peak at the beach.  The wind on this side of the island was great for wind surfing, evidenced by the many boards and bodies in wetsuits, but the surf was too high for swimming.

We thereby opted for the more protected cove of Repulse Bay.  I learned later that the beach at Repulse Bay has wonderful plaster statues of Chinese deities and mythical figures, but we didn’t see them when we were there. We enjoyed the water here – though the water was murky, we couldn’t even see our toes when we were swimming.

Sweetie enjoyed collecting small shells and agates along the waters edge.  At one point, three Chinese tourists came up to her and literally picked her up and stood beside her for photographs.  Had we not become a little accustomed to the attention, this would have taken us by surprise.  It was still a little disconcerting but we understood their intent at this point.

On our return to the hotel, I mistakenly left my iPhone behind on the bus and didn’t realize it until we were walking through the lobby.  Fortunately, the clerk at the counter was able to help us and she called the bus station on our behalf. While Patrick and Buddy waited, Sweetie and I ran back to look in hopes I may have dropped it along the way.  When she and I returned, we learned one matching my description had been turned in.  She wrote out instructions in Chinese characters and we made our way to the bus terminal.  What a relief!

Like Shanghai and many of China’s mega-cities, Hong Kong is recognized by its skyrises.  Earlier, I shared with you a sneak peak at a new unit study I have compiled titled, The World’s Tall Buildings: An Engineering Unit Study.  If you’d like to receive this curriculum supplement for free, simply subscribe to my newsletter.

Thank you so much for joining me on our discovery of China.  I hope that you have been inspired to travel yourself .. whether your travels are abroad or close to home, you will certainly create memories you will cherish for a lifetime.

For your convenience, all 10 days of Discovering China are linked to one landing page.  This post is part of the iHomeschool Network’s Autumn Hopscotch, a 10 day series of posts by over 40 different homeschool bloggers. Visit the hopscotch home page at iHN for ideas and inspiration.