The cells of the human body require a constant stream of oxygen to stay alive. The respiratory system provides oxygen to the body’s cells while removing carbon dioxide.

There are 3 major parts of the respiratory system: the airway, the lungs, and the muscles of respiration. The airway, which includes the nose, mouth, pharynx, larynx, trachea, bronchi, and bronchioles, carries air between the lungs and the body’s exterior.

The lungs act as the functional units of the respiratory system by passing oxygen into the body and carbon dioxide out of the body. Finally, the muscles of respiration, including the diaphragm and intercostal muscles, work together to act as a pump, pushing air into and out of the lungs during breathing. 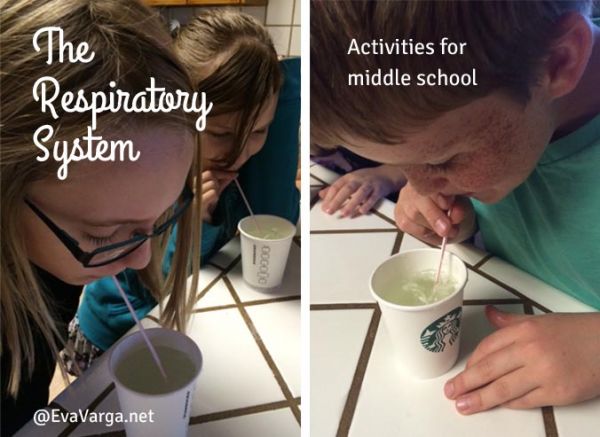 I gave each of the students a cup of water to which I added a few drops of bromothymol blue (a chemical that is often used to test water in fish tanks and can thereby be purchased at pet stores).  I then gave each student a straw and instructed them to blow bubbles into the water, being careful not to invest or inhale through the straw. Within a few minutes, the water began to change color – eventually turning a faint yellow color.

Note: We used filtered water from our refrigerator but the lab instructions called for distilled. A fun inquiry project would be to test if the color varies with different types of water. 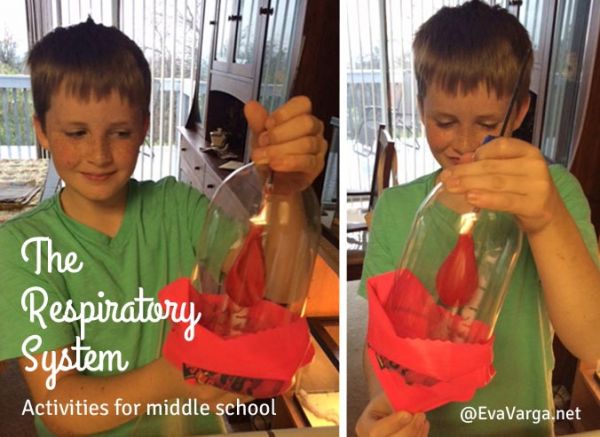 The model shown here simulates the contraction of the diaphragm (the plastic swim cap) and the resulting rush of air into the lungs (the balloon inside the bottle). Build one yourself so students can visualize the process that take place in their chest cavity.

When you inhale, your diaphragm, a band of muscles at the bottom of your chest cavity, contracts. When your diaphragm contracts, it flattens and pulls downward – just like when you pull down on the plastic swim cap on the bottom of the model. As it does, the volume of your chest cavity increases and the pressure inside it decreases. The pressure of the air outside your body is then greater than the pressure inside the chest cavity, so air rushes in through your mouth and nose.

When you exhale, your diaphragm relaxes and returns to its original shape, decreasing the volume and increasing the pressure of air in your chest cavity. This forces air out of your lungs.

In advance, I calibrated a clean plastic milk jug (marking off 1-cup increments with a permanent marker on the side). I then inverted it in a sink about half full of water, being careful so that the water doesn’t come out of the jug. Holding the jug steady so it doesn’t fall over (another set of hands is helpful), I inserted a long rubber tube (approximately 60cm) into the jug.

I then asked for a volunteer to take a big breath and exhale into the open end of the tube. As he blew, the water inside the jug was forced out and replaced with the air he exhaled (Carbon Dioxide and other trace gases). We were then able to measure the amount of air he breathed out using the change in water level.