We recently had an opportunity to see an exhibit of Dr Seuss’ artwork. The exhibit has been in the area for a while but I purposely timed it so that we would see it on his birthday.  The exhibit was very interesting & informative.  If you aren’t a Seuss fan … I would be willing to bet you might become one after seeing more of his work. 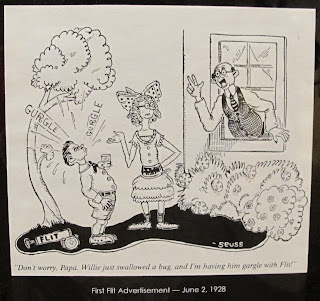 What I liked about this exhibit is that it was laid out similar to a time-line and as you walked through, you were able to get a sense of how his career evolved over time.  In anticipation of attending this exhibit, we had read The Boy on Fairfield Street

by Kathleen Krull so we were versed on his advertising career.  I found these two advertisements particularly intriguing. What struck us was how different the times were even 70 years ago.  That people would consider gurgling with chemicals laced with DDT just as people would brush their teeth with Radon in the days of Madam Curie. 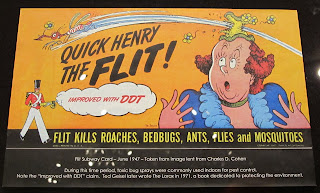 The other work that fascinated me was his creative taxidermy sculptures.  The book, The Secret Art of Dr. Seuss

features eight of his sculptures and since its publication, an addition nine ‘lost sculptures’ have since been identified.  Ted Geisel, aka Dr. Seuss, treasured his taxidermy artworks and found a number of ways to use them in various projects throughout the 1030s and 40s. 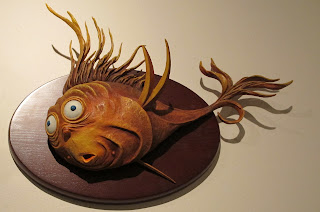 I have shown two of my favorites here.  In the next week, we will be exploring this topic for fully as I pull out the polymer clays and do a mini-lesson on animal adaptations with the munchkins.  I encourage you to join us … it would be fun to see all the crazy Seuss inspired critters we can create. Please post a link in the comments if you want to play along and I’ll include a link to your post in our follow-up.  🙂

“If you never did, you should.
These things are fun, and fun is good.”
~ Dr. Seuss

Surprisingly, Buddy was very much interested in the life-size sculptures.  Most were cast in bronze but one was in stainless steel.  He asked for his picture taken at each one.  I’ve selected to share The Lorax (Classic Seuss)

in honor of the movie that was released this weekend. 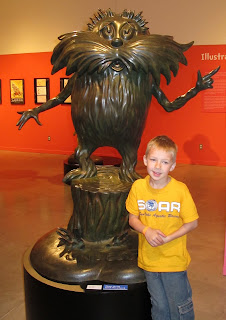 Edited 3 March 2017 :: One of the things the exhibit touched upon was that Seuss was kind of a racist. I was recently reminded of this when an article was shared on social media detailing flyers kids made to protest “Dr Seuss Week” at their school.

I admire the gumption of the kids who made these posters. I believe it is important to know this history. Dr. Seuss is such a revered figure in our society, a staple of children’s literature. Schools and libraries across the country honor his work annually.

How do we move away from false heroes and saints and acknowledge people’s faults alongside their accomplishments? We can utilize his work as an opportunity to have a discussion with our students about the history of racism in the U.S. and to humanize Dr. Seus. Our heroes are not infallible. People learn and grow and change for the better.