We presently call Northern California home, or more affectionately NorCal.  It is the northern portion of the state and includes the San Francisco Bay Area and Sacramento, two metropolitan areas. In far northern California lies the Shasta Cascade region, a wonderland of outdoor recreation – surely providing staycation opportunities for all interests.

The Shasta Cascade region, covering 25% of California, offers everything from glistening lakes and world-class rivers to scenic drives and backcountry roads.  It is the perfect escape from the fast pace of city life providing something for everyone to discover and enjoy whether it be great recreation, adventure or pure relaxation. 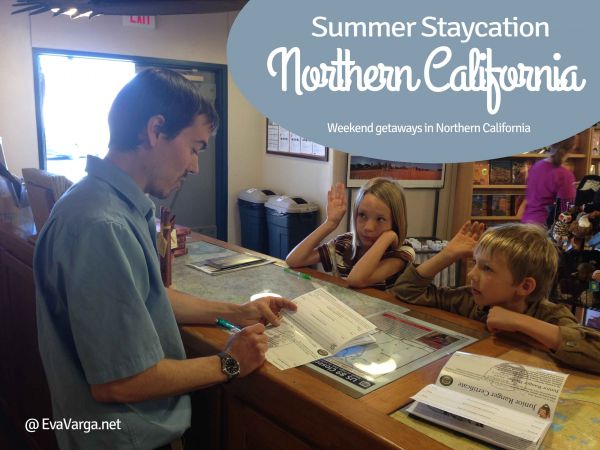 Snow-capped mountains, pristine lakes, prairie swaths of forest, volcanic landscapes; the Shasta Cascade region provides scenic vistas within just a few hours drive – ensuring the journey is half the adventure. Choose from a number of great opportunities in this diverse region to create a staycation of your choice 0r follow the suggested itinerary of the Shasta Cascade Wonderland Association.

Check out some of the fun NorCal excursions you can enjoy:

Discover the culture of the Coastal Native Americans, explore the Redwoods, and Pacific ocean beaches at Patrick’s Point State Park near Trinidad.

Lassen Volcanic National Park will amaze you with the variety of remarkable hydrothermal features.

With 27 miles of hiking trails, Castle Crags State Park will keep you busy all weekend.

At Lucero Olive Oil, you can get a peak behind the scenes at one of the state’s most lucrative agricultural resources.

We never leave the bay area without visiting San Francisco Chinatown, one of our favorite places to do a little shopping and enjoy a delicious meal.

We enjoy the tour at Shasta Dam so much, we’ve done it three times!  As one of the largest concrete dams in the world, it is a must see! 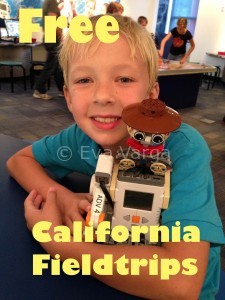 Other fun activities you may enjoy throughout the summer

no matter where you live include: 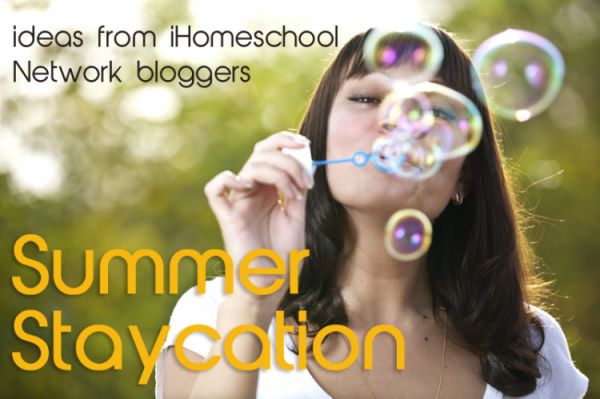 Over the past few months, as we have traveled to various parts of California and Oregon, we have had many opportunities to learn about the Native Americans of this region.  It has been a gratifying experience – made even more rewarding because the learning opportunities have occurred naturally and in context to our daily lives.  I’ve always believed that seeing artifacts, standing in the same surroundings, and being able to truly experience what life was like in the past has a greater impact than reading about it in a textbook.

I have had a profound memory of a field trip that I must have experienced as a little girl.  Every time I travel on the coast – either north or south from the county in which I grew up – these memories come flooding back to me.  Sadly, I don’t recall exactly where I had visited but I clearly remember sitting in a Native American longhouse and hearing tribal elders share stories of their ancestors and demonstrate their tools and lifestyle.  I have always wanted to return – particularly now so that I can share that experience with my own children.

When we were in Trinidad a few months ago, we traveled to Patrick’s Point State Park – where we visited the recreated Yurok village, Sumêg, consisting of traditional stye family houses, a sweat lodge, a redwood canoe – and Redwood National and State Parks – where we further explored the dynamic ecosystem of the Redwood forest.  As we wandered about and as the kids completed the activities to earn their Junior Ranger badges, I couldn’t help but wonder if this was where I had come as a child. 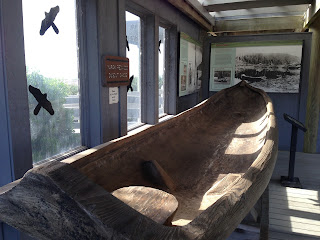 The Northwest Coastal Indians lived in what is now Alaska along the Pacific Ocean down the coast to Northern California. This was a rugged strip of land with many small islands, deep inlets, and narrow beaches. The mountains rise to the shore in many places. Thick forests of spruce, cedar, and fir dominate the area supplying and endless supply of wood. Many rivers and streams cross the land. By the 1750’s more than 100,000 Indians lived in this area because it was richer in natural resources than any other area of North America.

While this territory was crisscrossed with thousands of trails, the most efficient form of transportation was the dugout canoe (pictured above) used to travel up and down rivers and cross the wider and deeper rivers such as the Klamath. These tribes used the great coast Redwood trees to build their boats and houses. Redwoods were cleverly felled by burning at the base and then split with elkhorn wedges. Redwood and sometimes cedar planks were used to construct rectangular gabled homes. 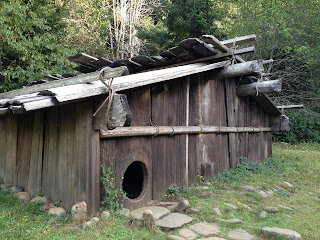 Most villages consisted of large rectangular houses constructed of planks splits from fallen redwoods.  These houses were built over pits dug beneath the building, with the space between the pit and the walls forming a natural bench.  The posts were often decorated with carved figures. The earth floors were divided by woven mats into family units. Several families lived in one of these large structures. Cook fires in the center of the building were shared and an opening in the roof allowed smoke to escape. 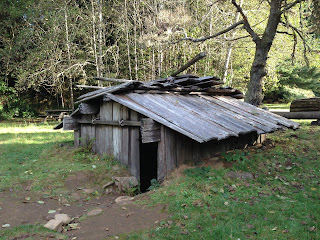 As we explored Sumêg, the exhibits at the visitors center, and the Native American museum at the Trees of Mystery, the kids made many connections to our studies.  We saw artifacts representing many of the tribes from across North America, including the Hidatsa (we had recently studied the expedition of Lewis & Clark and the contributions of Sacagawea), Modoc, and Wintu.  We discussed the similarities and differences between the coastal tribes as those we were familiar with in Central and Southern Oregon and the Northern Sacramento Valley.

Vast difference exist between the coastal peoples, nearby mountain range territories, and the vast central valleys.  Nevertheless, all of these tribes enjoyed an abundance of acorn and salmon that could be readily obtained.  We marveled at the variety of the regions basketry – both coiled and twine type baskets were produced throughout the area.

When we returned from our holiday in Southern California (Disneyland, Legoland, & Long Beach), we were in dire need of some outdoor time.  Solitude and peace that only nature could provide.  The weather Sunday morning was perfect – sunny and relatively cool so we ventured out for long hike to Castle Crags State Park.

Castle Crags State Park features 28 miles of hiking trails, including a 2.7 mile access trail to Castle Crags Wilderness, part of the Shasta-Trinity National Forest.  The Pacific Crest Trail also passes through the park.  The park is named for the 6,000-feet tall glacier-polished crags.  The solitude you experience as you explore the forest or traverse part of the Pacific Crest Trail cannot be matched.

The spectacular mountains you see in these pictures represent vastly different geologic stories and processes that have been shaping the land for more than 500 million years.  The persistent forces of day-to-day erosion, together with slow earth movements, keep this mountain landscape in dynamic flux. 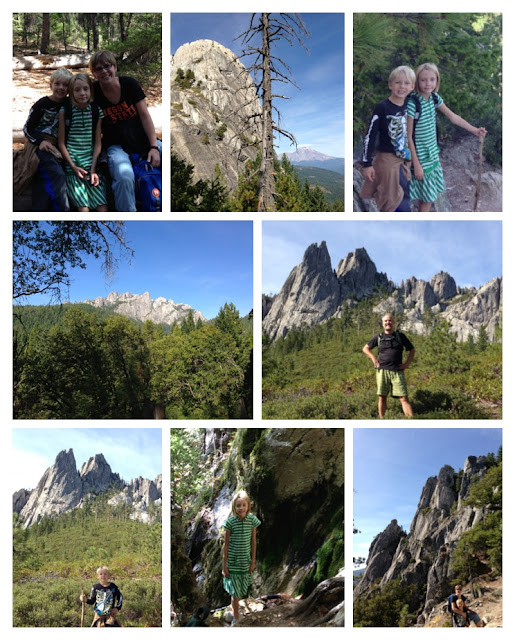 The Gray Rocks are mainly greenstone and are a detached portion of the Copley Formation, related to the ancient and complex geologic history of the Klamath Range.  The spectacular Castle Crags are made of granite that cooled slowly deep within the earth.  Over time, this granite was uplifted and the rock above it worn away.  Once the granite was exposed to the elements, water and ice have taken over as the main sculpting forces, breaking fractures in the rock, creating the castle-like features.

Mt. Shasta reaches the impressive height of 14,179 feet and is by far, the youngest geologic feature in the area. Mt Shasta is volcanic, forming in episodes beginning 530,000 years ago and last erupting in 1786.  Considered dormant now, it will undoubtedly become active again in the future.

It was an awesome day.  We planned ahead and managed to bring along snacks and plenty of water to drink. It was an arduous hike, however, so we rewarded ourselves with dinner in Dunsmuir – where we discovered a little brewery.  The food was delicious and though our bodies were tired, our spirits were rejuvenated.