Continuing with our weekly Friday excursion … this week brought us to Central Oregon’s local news channel … News Channel 21. We had been looking forward to the trip all week and we were not disappointed.

Bob Shaw, the meteorologist, met us in the lobby and we had a little time to introduce ourselves as we waited for our other friends to join us.  Once underway, he walked us through the newsroom where the reporters were in a meeting … discussing the plan for the day and what stories to feature in the nightly news. 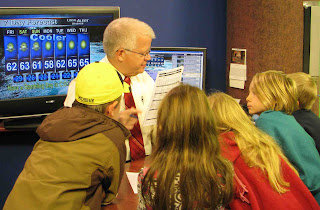 We then entered into the newsroom where three cameras were centered.  He informed us that each camera was about $25,000 !!  We gathered around his desk where he proceeded to explain how the morning’s new report is prepared.

The producer and his assistant come into work around 12 a.m. and work through the night to prepare the morning’s ‘Rundown’ – essentially a second by second script outlining the order in which topics are presented, noting the commercial breaks as well.  He explained in detail how the cameras work together to film the reporters and that a producer in the control room will flip a switch to jump from one to the other.  All the reporters also wear an earpiece through which they receive instruction from the producer, “Cue Lindsay, Camera 3,” or “30 seconds.” 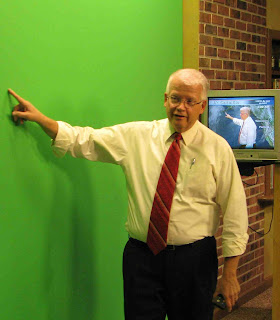 We talked in length about how the weather segment was produced.  This was perhaps the most intriguing as well for we learned that when he is at his desk, he controls 4 distinct computers which project onto the main screen.  He uses a little clicker that looks like a remote to switch scenes.  Each scene that we see on our television screens is accessed in what is called a show to tell a story.

While we were present, he filmed a short segment for the web broadcast.  Upon completion, he explained how the green wall functions.  We had a good time playing with this as one of our moms had a similarly green blouse.

When we departed, I was surprised that he had remembered my name as he addressed me directly when I thanked him for his time.

All in all … it was a great field trip.  The kiddos now have a good understanding of how the media works to inform us of current events and weather.