While visiting friends in Bend, Oregon recently, we had the opportunity to visit a local printshop and book making studio that had a small collection of MC Escher prints on display.

Escher was a prolific artist and master printmaker, producing more than 400 original prints in his lifetime. The exhibit we visited showcased Escher’s skill in wood cut, wood engraving, lithography, and linocut. 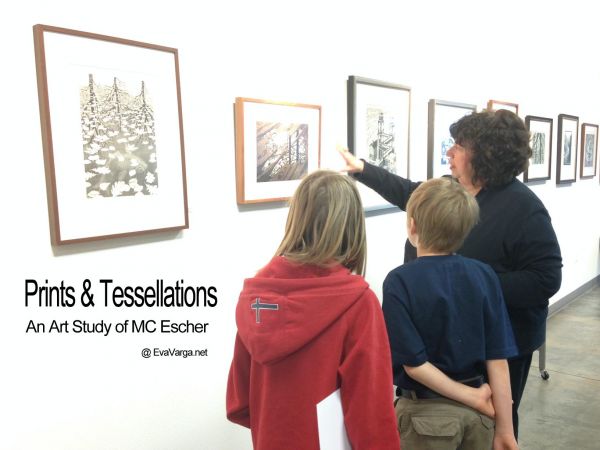 The prints spoke to Escher’s fascination with illusion, whether created through tessellations, impossible architectural constructions, or reflections. “Escher’s images appear logical at first, but the deeper you look, the more improbable they become. Each print is a puzzle that asks to be solved, but the solution is elusive,” explains Ron Schultz, a volunteer who contributed to the exhibit catalog. “Escher’s work endures because of its mystery.”

So let us then try to climb the mountain, not by stepping on what is below us, but to pull us up at what is above us, for my part at the stars; amen. 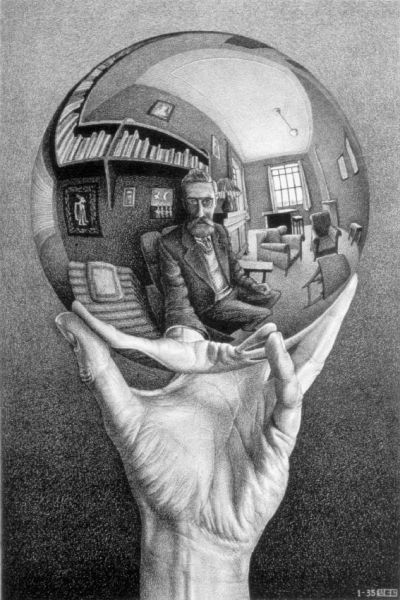 Maurits Cornelis Escher (1898-1972) is one of the world’s most famous graphic artists. His art is enjoyed by millions of people all over the world. He is most famous for his so-called impossible constructions but also created many wonderful, more realistic works.

Born on 17 June 1898 in Leeuwarden, Friesland, he was the youngest son of civil engineer George Arnold Escher and his second wife, Sara Gleichman. Although he excelled at drawing, his grades were generally poor. He also took carpentry and piano lessons until he was thirteen years old. He briefly studied architecture, but later switched to decorative arts. In 1922, Escher left the school after having gained experience in drawing and making woodcuts.

He lived and worked in Italy for a time, where he met and married his wife, Jetta Umiker. They lived for a time in Switzerland but eventually settled in the Netherlands.

During his lifetime, Escher created 448 lithographs, woodcuts and wood engravings, and over 2000 drawings and sketches. Like some of his famous predecessors (Michelangelo, Leonardo da Vinci, Dürer and Holbein), Escher was left-handed.

In his early years, Escher sketched landscapes and nature. He also sketched insects, which appeared frequently in his later work.

A tessellation of a flat surface is the tiling of a plane using one or more geometric shapes, called tiles, with no overlaps and no gaps. There are three main types of tessellations: Regular (a pattern made by repeating a regular polygon), Semi-regular (made of two or more regular polygons; whereby the pattern at each vertex is the same), and Demi-regular.

Visit Juliana Kunstler for a great art lesson on Tessellations.

Mathematicians know all about mobius strips. A mobius strip is a surface with only one side and only one boundary component. The Möbius strip has the mathematical property of being non-orientable. It can be realized as a ruled surface. It was discovered independently by the German mathematicians August Ferdinand Möbius and Johann Benedict Listing in 1858.

I don’t grow up. In me is the small child of my early days.

M.C. Escher was fascinated by the Möbius strip. Escher’s Bond of Union is well-known for its portrait of a couple using a Möbius strip. The man and woman are infinitely intertwined.

Create a Möbius strip of your own by cutting a long strip of paper, twisting once, and taping the ends together.  Cut the strip lengthwise down the center.