I grew up on the Oregon Coast in beautiful Bandon by the Sea. I spent many a day on the shoreline investigating the marine invertebrates under the rock crevices and walking the sandy beaches. My brothers and I longed for the minus tides, providing us the rare opportunity to go spelunking in the sea caves just off shore. These rocky islands are now protected areas for marine bird nesting habitat but back in the 70s, it was our playground. 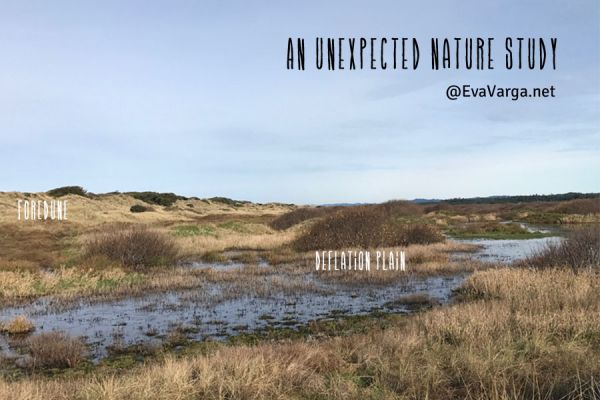 In all the years I have spent on the beach, I have found a diverse amount of debris and organisms in varying states of decay. I probably spend an equal amount of time sifting through the wrack on the high tide line as I do in wave zone digging in the sand looking for mole crabs.

I have found marine debris from Japan evidenced by the kanji script. An occasional flip flop or fishing net remnants are not uncommon. While immersing myself in marine biology courses at the Oregon Institute of Marine Biology one summer, I even found several squid egg cases that washed ashore after a winter storm, providing my peers and I an opportunity to observe the development up close. Yet, once in a while, I am still surprised at what washes ashore. 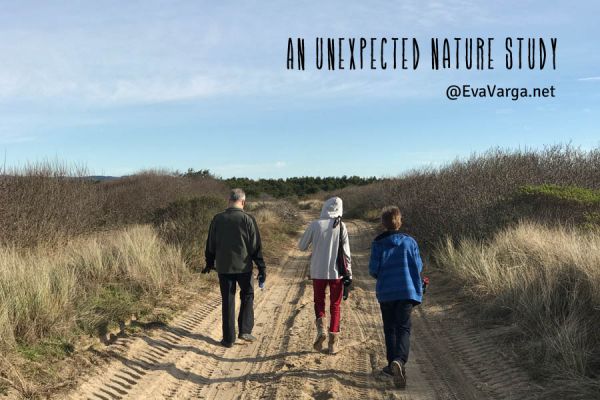 Walking along the ATV trail across the deflation plain

This past holiday weekend, my family and I enjoyed a leisurely walk on the beach near our home. Our goal was to field test a new marine debris app, a joint initiative between the NOAA Marine Debris Program and the Southeast Atlantic Marine Debris Initiative. The tracker app allows you to help make a difference by checking in when you find trash on our coastlines and waterways.*

We drove out to the North Spit and thereafter began our excursion through the deflation plain. We soon discovered, however, that there was too much standing water to stick to the trail that meandered through the wetland area. We thus walked along the ATV road until we reached the small foredune. Just a few feet up and over and we arrived on the sandy beach.

No sooner did we arrive at the shore and we immediately were captivated by the presence of a strange organic material that was strewn across the beach for miles. Upon first glance, it looked like a hard plastic tube resembling a sea cucumber. My first suspicion turned out to be incorrect, however. Upon returning home, I learned that what we had found were actually colonial tunicates. Fascinating! 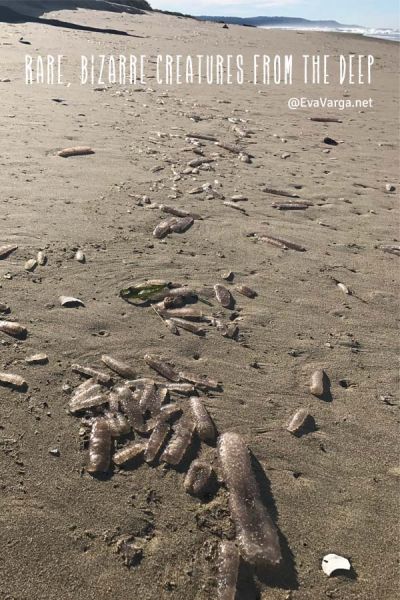 This bizarre and rarely-seen creature is called a pyrosome, a species of pelagic colonial tunicates. Their scientific name, Pyrosoma atlanticum, is derived from the Greek words pyro meaning ‘fire’ and soma meaning ‘body’ which refers to the fact that they are known for bright displays of bioluminescence.

Pyrosoma atlanticum are one of the few pyrosomes that make it to the west coast of the U.S. The species found here are less than a foot but can get as long as 24 inches. Largely colorless, they can show up as pink, grayish or purple-green. 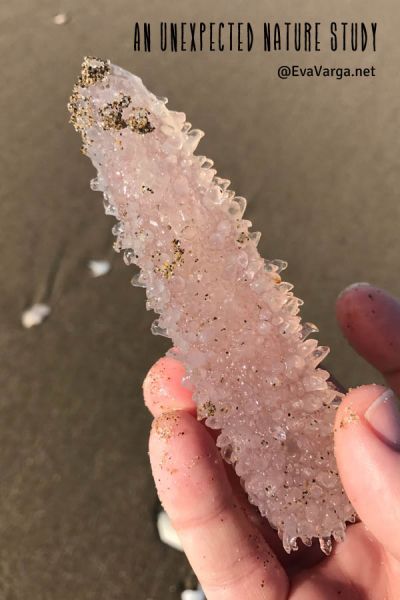 A specimen of the colonial tunicate, Pyrosoma atlanticum

These massive colonies of cloned creatures are related to a kind of jellyfish called a slap. A tunicate is a marine invertebrate animal, a member of the subphylum Tunicata, which is part of the Chordata, a phylum which includes all animals with dorsal nerve cords and notochords.

Each individual organism is about 1 cm long – less than a third of an inch. They are all connected by tissue and in turn form this colony that looks like a plastic tube. The recent winter storms have caused them to strand on the shores and have been found in all areas of the coast.

Usually found in temperate waters as low as 800 meters. The colony of animals is comprised of thousands of individual zooids and moves through the water column by the means of cilia (an organelle found in eukaryotic cells that project from the much larger cell body).

As they move through the water column, sometimes close to the surface and sometimes as far down as 2600 feet, they filter plankton out of the water for food. As it sucks water in, it then pushes it back out, thereby propelling it through the ocean. It does all this via one opening only, so it moves incredibly slow.

For more images of Pyrosoma, check out Bob Perry’s photographs. Included in his work are a few pseudoconchs (false shells) of the pelagic mollusk Corolla which we similarly found.

If you are interested in learning more about invertebrates with your students, I encourage you to look into the Amazing Animals curriculum unit I have written to introduce middle level students to zoology. This 10-week unit is full of inquiry-based activities and lesson plans fully outlined for you.

* Due to our fascination with these rare creatures, we didn’t spend as much time with the debris tracking app as I had intended. We’ll give it a go another time.