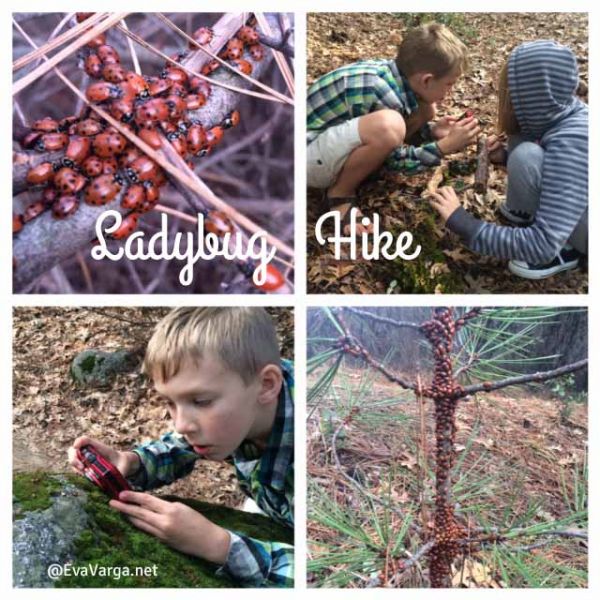 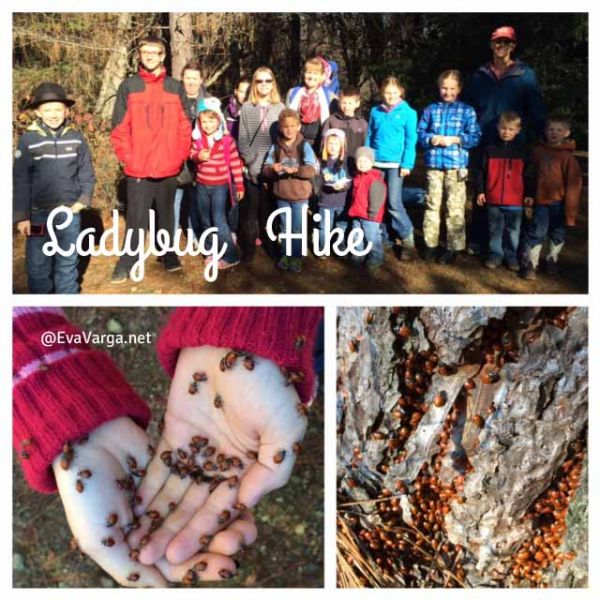 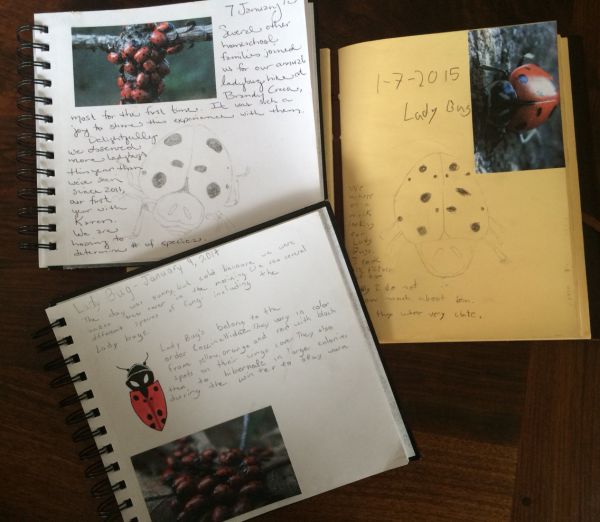 For the second year in a row, we have hiked into an area of Whiskeytown National Recreation Area to discover ladybugs.  The year before we moved, the Roots & Shoots group that we now belong had hiked in for the first time.  In this short, three year span, our group leader has observed a significant decline in the number of ladybugs present.  The decline has been so significant, even the kids could recognize a change from 2012 to 2013. 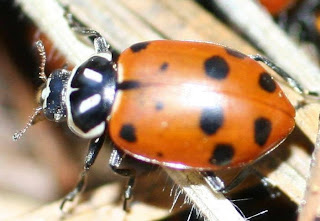 Most coccienellids overwinter as adults, aggregating on the south sides of large objects such as trees or houses during the winter months, dispersing in response to increasing day length in the spring.  In 2012, we observed them covering the perimeter of a pine tree and all amongst the leaf and pine needle litter on the forest floor.  Once we noticed them, it was difficult not to step on them. I blogged about our discovery here, Ladybugs Ladybugs Ladybugs, and also reported our spotting to Project Noah – I encourage you to follow the links – the pictures give some idea as to how many there were present.

From the Lost Ladybug Project website:  “Across North America ladybug species distribution is changing.  Over the past twenty years several native ladybugs that were once very common have become extremely rare.  During this same time ladybugs from other places have greatly increased both their numbers and range.  Some ladybugs are simply found in new places.  This is happening very quickly and we don’t know how, or why, or what impact it will have on ladybug diversity or the role that ladybugs play in keeping plant-feeding insect populations low.” 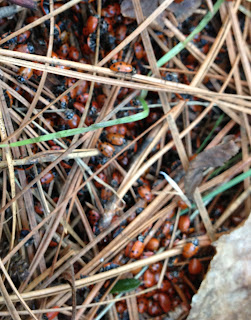 This year, we took part in the Lost Ladybug Project for the first time (we only recently learned of this citizen science opportunity).  Our group leader reported our data and the species we observed was confirmed as Hippodamia convergens, a native species but not the elusive 9-spotted species that is of most concern.  Commonly known as the convergent lady beetle, Hippodamia convergens is one of the most common lady beetles in North America and is found throughout the continent.

Adults are slightly elongated in shape and can range from 4-7 mm in length. They have a prominent black and white pattern behind the head, and black spots on red forewings. Beetles may have a full complement of 13 spots or they may have only a few. The white lines that converge behind the head are common to all individuals.

We met our Roots & Shoots group this morning for our monthly outing.  First, I should clarify, that since we have moved we are now involved with a new group and the nature walks are led by someone other than myself.  Our leader, Karen, is very knowledgeable (particularly about birds) and it is such a delight for me to be a participant rather than the the facilitator.  Being new to the area, it is also a blessing because she knows the area much more so than I.  She has been able to take us to places with secrets known to very few. 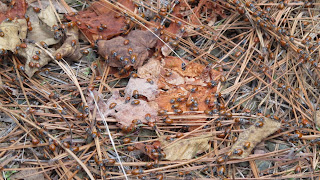 Today was one of those days whereby secrets were revealed.  She shared with us a location in the area of Whiskeytown National Recreation Area (that is as much as I’m willing to divulge for she stated that some collectors, if they knew the location, would come and scoop them up to sell). 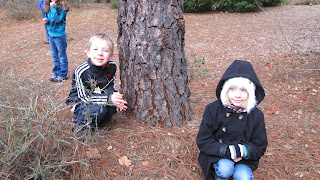 Most coccinellids overwinter as adults, aggregating on the south sides of large objects such as trees or houses during the winter months, dispersing in response to increasing day length in the spring.  We observed them all around the pine tree pictured above, not just on the south side.  On the forest floor, there were literally millions of ladybugs aggregating under the leaf litter.  One had to be careful when taking a step. 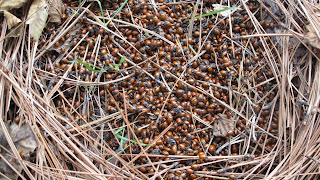 Our next step is to journal our discovery in our nature journals.  I’ll be sure to share our entries soon.  Undoubtedly, however, this is one outing we will never forget.  🙂