While in San Francisco recently, DH surprised us with an impromptu visit to the Lady Washington and Hawaiian Chieftain, both of which had come into port just the night before.  Both ships were open for dockside tours similar to an open house. We were free to explore at  our own pace. The crew members, dressed in 18th century clothing, were positioned at points of interest on the vessel to answer  our questions and tell us more about the boats and their lives living aboard. 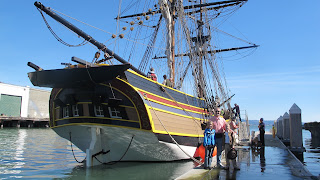 The Lady Washington and Hawaiian Chieftain both call Gray’s Harbor home.  Launched on the 7th of March in 1989, the Lady Washington was built in Aberdeen, Washington by Grays Harbor Historical Seaport Authority. The new Lady Washington is a full-scale reproduction of the original Lady Washington, which sailed during the Revolutionary War.  The topsail ketch Hawaiian Chieftain is a replica of a typical European merchant trader of the turn of the nineteenth century. Her hull shape and rigging are similar to those of Spanish explorers’ ships used in the expeditions of the late 18th century along the Washington, Oregon, and California coasts.  It was purchased by the Grays Harbor Historical Seaport Authority in 2005.

Our little adventurer was all ears when he discovered that the Hawaiian Chieftain had been used in the filming of Pirates of the Caribbean (as the Interceptor). When the crew talked about the summer camp opportunities onboard these ships, he was ready to toss his satchel below deck and get busy rigging the sails.  The most intriguing of the camps is the “Expedition Voyages Family/Youth Camp” whereby adventurous families will sail the beautiful San Juan Islands of Washington State, following in the wake of maritime explorers George Vancouver, Robert Gray, and Charles Wilkes. 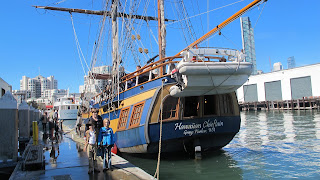 It was a fun little side trip before we had to head northward for home.  Before we disembarked, Buddy used his own money to purchase a few pieces of eight.  He now carries them in his satchel, along with his other treasures.  Upon visiting the library a few weeks later, he picked out an audio book by Scott O’Dell, The Cruise of the Arctic Star.  I foresee a nautical career.