I keep a list of local places we want to explore and adventures we hope to someday take part … essentially a  field trip wish list.  I’ve had ‘hydroelectric dam’ on the list for some time … and this week, we were finally able to check this one off the list.

We joined up with a charter school to take part in an organized field trip to Shasta Dam – located north of Redding on the Sacramento River.  It turned out to be a fabulous experience.  We all learned so much – each of us connecting with something different the interpreter said.  The kids were intrigued and listened attentively the entire hour of the tour. We had previously studied energy resources and electricity so this field trip helped to clarify many things for us.

Initial construction of the Shasta Dam began in 1938 with excavation and the relocation of the Southern Pacific Railroad that ran through the dam site.  A tunnel was blasted through the nearby hillside to temporarily detour the train during construction, moving it away from the excavation work.  Along the Sacramento River in Redding, California, aggregate was gathered and delivered to stockpiles near the dam site by way of a 9.6 mile long conveyor belt, the longest of its type in the world.  The conveyor belt transported tons of gravel that would be used in the concrete mix to build the dam.

With excavation complete, construction on the dam began.  Freshly mixed concrete was delivered to forms (50′ x 50′ and 5′ deep) using 8-cubic yard buckets suspended from a cableway system used to move the concrete to waiting crews.  The massive blocks were built one on top of another, first to form the abutments, and finishing the dam by completing the spillway.

As the abutments rose, crews were busy building the permanent relocation track for the Southern Pacific Railroad, above where the new lake would be formed.  When this track was completed, the train was moved to its new location and the spillway construction began.  Before this could happen, an earthen coffer dam was built across the river upstream of the dam site, causing the river to rise and find the now empty railroad tunnel.  The river was allowed to flow past the dam site through the tunnel, just as the train had years before. 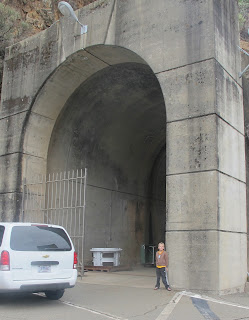 We stood in the south end of the tunnel (it has since been mostly filled in).  Inside, you could see evidence of soot on the ceiling and despite the fact that they dug down several feet from the train bed, the water level came to nearly the full height of the tunnel. The water level was evident where the soot had been scoured off the wall.  Buddy was intrigued by this tunnel and was delighted to have seen the redesigned locomotives (cab forward) that were necessitated due in part to this tunnel at the California State Railroad Museum earlier this year.  The tunnel was so long it would take a train more than five minutes to travel through it. As result, Southern Pacific rebuilt the train locomotive, putting the cab in the front and the tender and smoke stack behind to prevent asphyxiation. 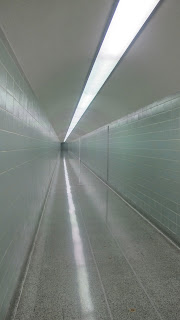 While walking inside the dam, we were lead through this 300 ft hallway.  The acoustics were so good here that we could stand at one end and not only hear the echo at the other end of the hall, but literally the sound wave as it went past. This was a highlight of the tour for me.

Buddy was also intrigued by the generators.  As we walked through this area, he turned to me and began a lengthy narration of one of his favorite episodes of World’s Toughest Fixes, the Columbia River Dam. I love it when their natural interests blend with our learning.  Unschooling Rocks!  🙂

Admin Note :: I want to emphasize that I understand the construction of a dam is controversial.  It dramatically alters the landscape and affects not only the wildlife but also prevents Native Americans from accessing sites of cultural importance.  I share this with you for educational purposes and want to clarify that I also share with my children the perspectives and opinions of the local Wintu people.