We awoke and enjoyed a delightful array of breakfast foods that Arvid laid out for us … bread, a little shrimp leftover from the night before, canned sardines, cereal, a variety of cheese spreads and jellies.  We enjoyed our meal and then packed a light lunch to take with us.

We then drove east and somewhere along the way met another cousin, Tore Furevik and his daughter Ingrid, whom accompanied us on the days adventures.  For better comfort, DH moved into the car with Tore and I was then able to sit in the front as Arvid drove … much easier for conversation and map navigation – which became my duty. 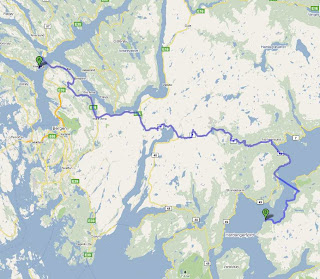 We met up in Tørvikbydgd (I believe) and took a ferry across the Hardangerfjord to Jondal. It had been drizzling all morning so the views of the fjord were less than desireable but no one complained.  Growing up on Oregon coast … cloudy skies and rain was familiar.  Upon docking, we continued on our journey and now drove south to Grotnes. 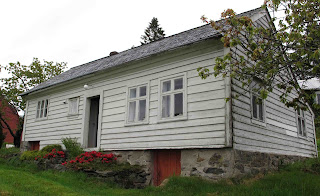 In Grotnes, we met yet another branch of the family tree each descended from Hans Asgaut Samsonson Grotnes (1830-1906) and Guro Olesdotter Oyre (1832-1922) …  Marit and her daughters Elisabet & Ashild.  Hans Asgaut and Guro had ten children, one of which was my great, great grandmother, Martha Kanutta who was born 26th May 1860, and carried the name of the place they lived at the time, Grotnes Hill.  She was the third child of ten (Marit and her girls are descended from the fourth child, Arvid and Reidar from the ninth child, and Tore and Ingrid from the fifth). 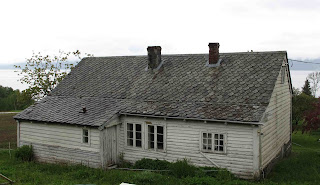 At the age of nine Martha became a baby tender on a farm called Akre near Grotnes.  She took care of the farm hands’ children as both father and mother had to work.  As she grew older she became a milk maid, also doing such work as wool carding, weaving, and knitting. She worked at this place for about eight years.  Lars Kanutta Berge (born on the 1st of July 1855, in Lofthus in Hardanger) came to the farm two years after Martha and worked there for six years.  They were then married and few years later emigrated to America following Martha’s eldest brother, Samson. 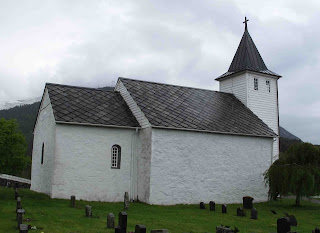 It was here that we were given a tour of the original homestead (Hans and Guro’s home is pictured above).  You can see the fjord in the background.  From what I understand, the house had been remodeled at some point along the way and additional rooms were added.  Originally, it only a single room. 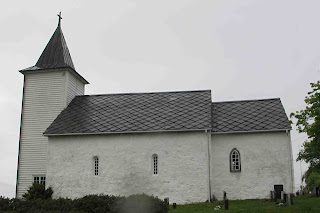 From here, we drove a little farther south to a small private dock where we boarded a small fishing vessel  to continue farther along the fjord to Ænes to see the church where Hans Asgaut and Guro were married.  It was an incredible experience … and though some small changes had been made to the church as well, it was like we had traveled back in time.  Arvid explained that Hans Asgaut was ahead of his time in that he was an avid journalist.  He wrote extensively about his daily life as well as kept copious details about his business transactions.  He was a cobbler by trade and would row a small boat back and forth across the fjord to reach his customers. 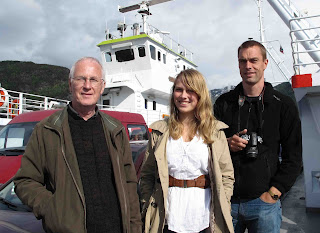 On the return voyage, the sun peaked out for a short time and we ventured out onto the deck of the ferry where I took this picture of Arvid, Ingrid and Tore.  We stopped in Norheimsund for dinner … pizza … where I was delighted to hear Eros Ramazzotti music play. Our gracious hosts had done so much to plan this wonderful day and truly treat us like royalty … so DH and I had to get a little sneaky in order to pay for the meal. 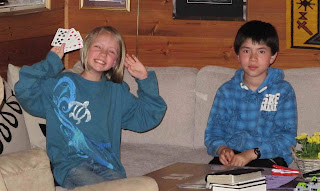 When we returned, Arvid’s son and grandson were at the house.  MeiLi was smitten with her cousin with whom she enjoyed playing games, browsing the web and generally being silly.  She asked for his address and will hopefully begin a lifetime correspondence.